About one in five of those who were infected showed no symptoms, they said, underlining the importance of physical distancing and basic hygiene to keep the disease at bay. Fox News

Warning over church in Australia selling bleach which its US leader claims can cure coronavirus. ABC

Do moods fit the weather like words to music? I feel slightly restless, the first time in lockdown.

I do some gardening, with my camera.The Ross River virus is haunting me. I feel old, and realise I look old. 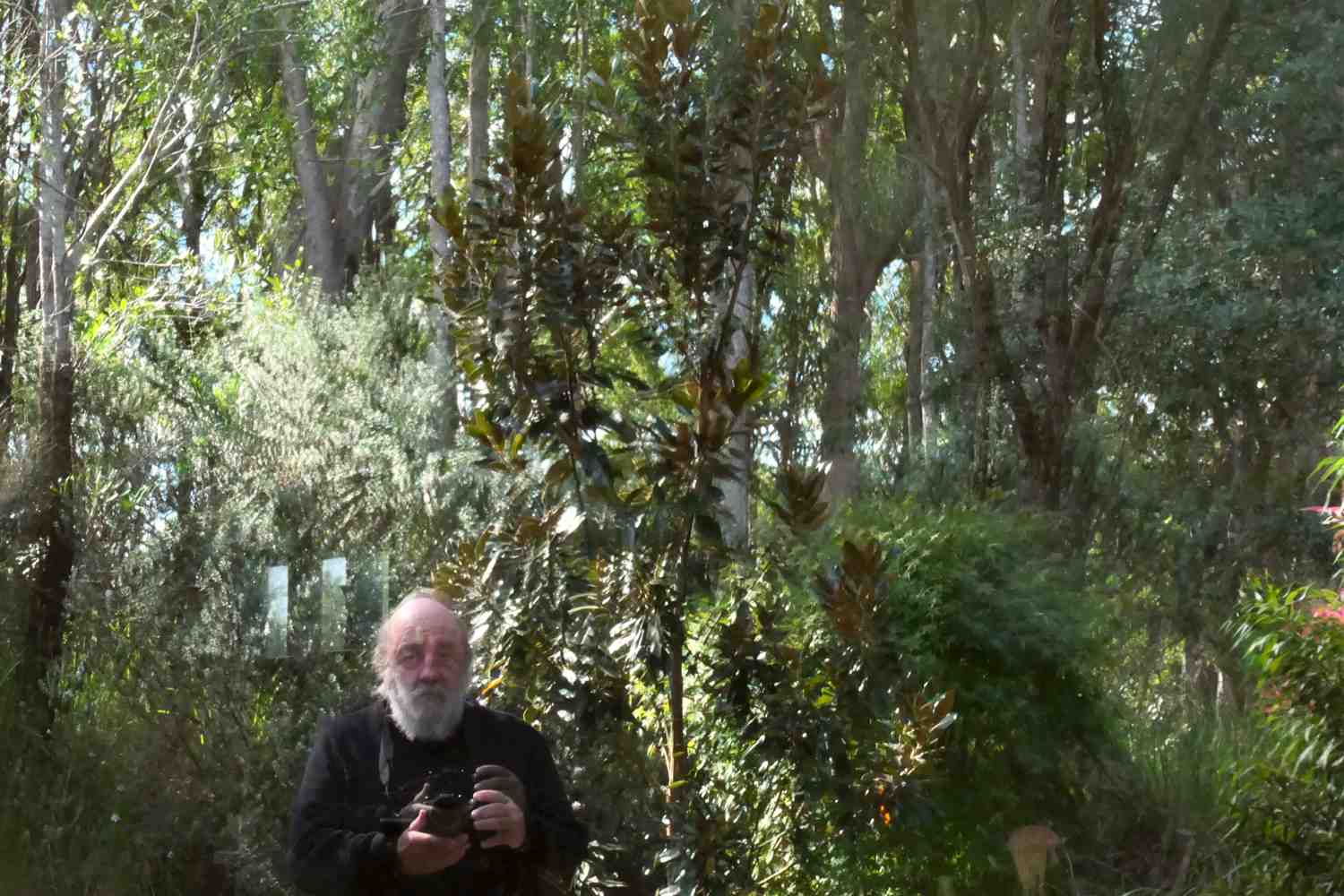 I try reading a book I steal from Wyn’s bedside table, a French literary crime novel, give up at page 30. I haven’t read a novel for a while, yet as a youngster devoured them greedily. So I play a game – what painting would I like to stand in front of, if teleported. I choose one I have never seen. One I have tried to catch while visiting my godson in Bruges, but never have. 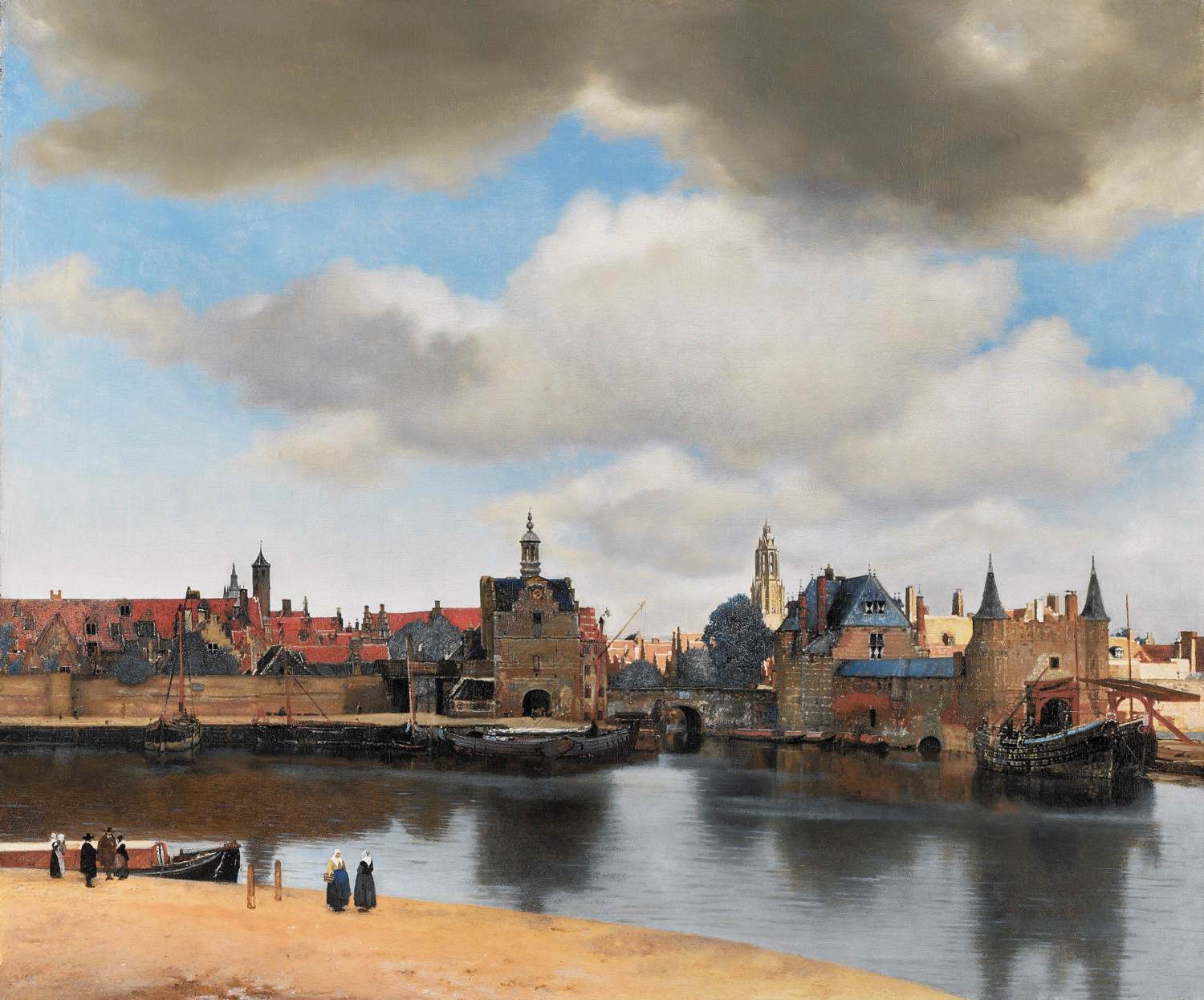 Vermeer’s magnificent townscape of Delft (perhaps the world’s first accurate cityscape created by a  painter and not a map maker) , though totally unique in his oeuvre, has always been regarded as one of his finest. It fetched the best price in a 1696 auction of  21 Vermeers. And in 1822 the Mauritshuis purchased the painting for an extravagant 2,900 guilders, thought to be a request by the Dutch King, Willem I.[1] It looks beautiful in reproductions and is, critics say, accurate. Vermeer used a camera obscura.

During his last night alive, Proust dictated passages for The Captive in ‘le Roman d’Albertine’ section of In Search of Lost Time. They concerned Bergotte, already ill but determined to see for himself this very painting.

At last he came to the Vermeer which he remembered as more striking,  more different from anything else he knew, but in which, thanks to the critic’s article, he noticed for the first time some small figures in blue, that the sand was pink, and, finally, the precious substance of the tiny patch of yellow wall. His dizziness increased; he fixed his gaze, like a child upon a yellow butterfly that it wants to catch, on the precious little patch of wall. ‘That’s how I ought to have written,’ he said. ‘My last books are too dry, I ought to have gone over them with a few layers of colour, made my language precious in itself, like this little patch of yellow wall.’  While examining a detail Bergotte collapses and dies.

The only other recognised townscape Vermeer painted is, The Little Street (c1660). This is my favourite Vermeer in the flesh (Rijksmuseum, Amsterdam). The façade with such detail, bricks and wood, signs of ageing doorways as windows is much closer to his contemporary Pieter De Hooch who was painting domesticity. His speciality was the doorkijkje, or “see-through door” technique depicting separate formal spaces beyond the immediate one, other rooms, courtyards or the street outside the house. The art historian Martha Hollander found that among more than 160 paintings attributed to de Hooch, only twelve do not exhibit this device.[2] Topographical features of Delft are frequent, sightings over walls of Oude Kerk, the Nieuwe Kerk and the Town Hall.

Here are two poems I wrote some years ago. The two paintings are not my favourite de Hooch’s, but nevertheless interesting.

Portrait of a family in a Courtyard in Delft 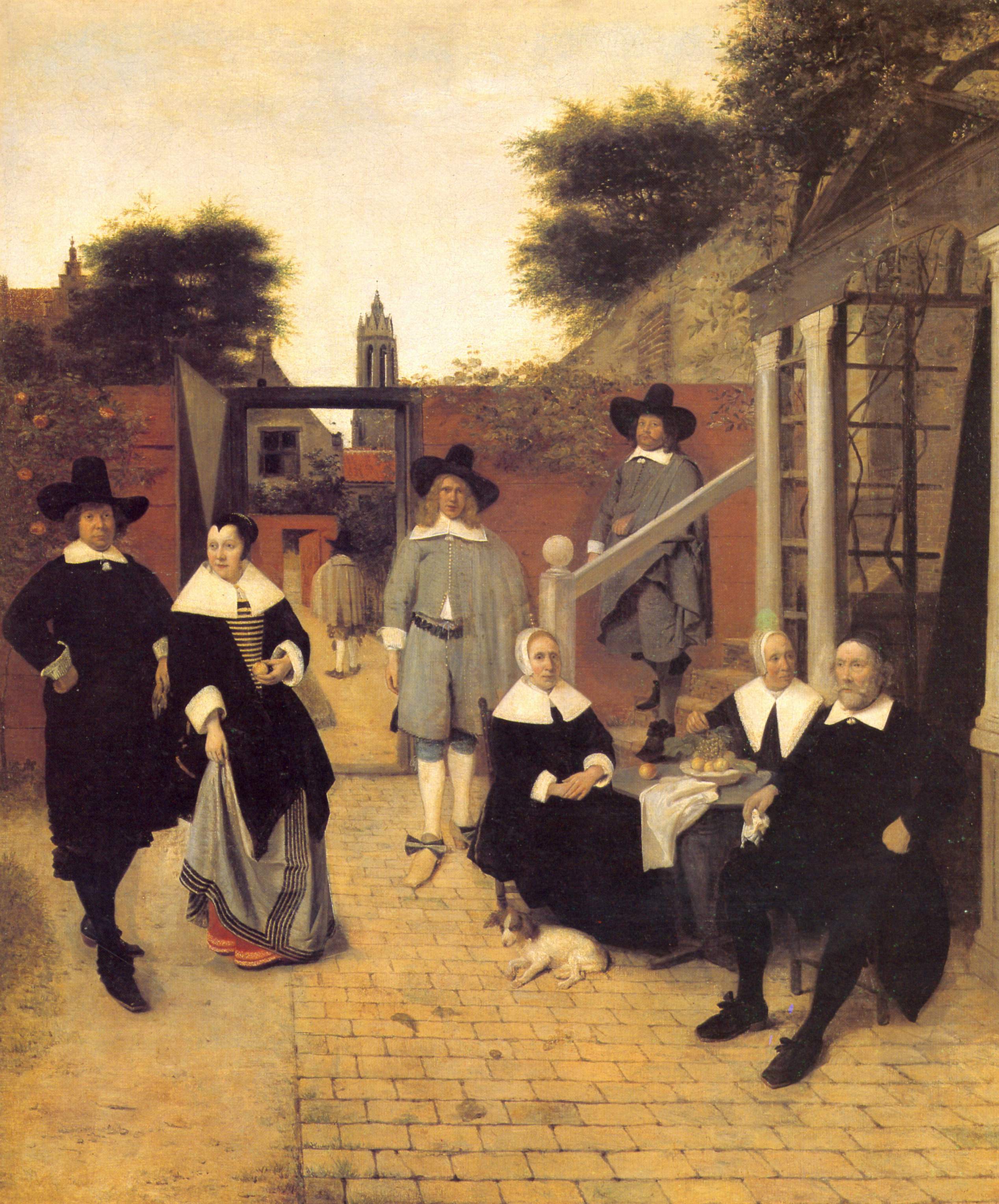 Relaxed, clean light and minimal shadow allows us time to pick
the joins in the ground. Yellow bricks pave a confident touch,
walking from the courtyard through an open door in wooden walls
into the garden enclosed in detailed brick between dark frame
and lintel framing the city and the tower of Nieuwe Kerk
at the end, another door opens onto an ordinary street.

This earliest portrait of a middle-class family poses three
awkward generations in sober demeanour, uncertain of who
wants to sleep with who, just waiting for this to finish, giving
away nothing of their feelings. The eight take so little space,
the one on the garden path is walking away from us.

The one coming down the steps just misses a peach on the table
and holds another. A style icon turns away, in no hurry to eat.
In the absence of the world’s scratchiness, the eye strolls over
the brush work, none demanding privilege in such harmony,
I might need only a handful of letters and forget Manet
and how a painting is a painting and not a picture.

De Hooch was painting light interiors by 1655 celebrating Euclidean space. I’ve seen a hole in his canvas where he stuck a pin with string attached to the vanishing point, usually off centre.[3]

Children in a Doorway with ‘Colf’ Sticks 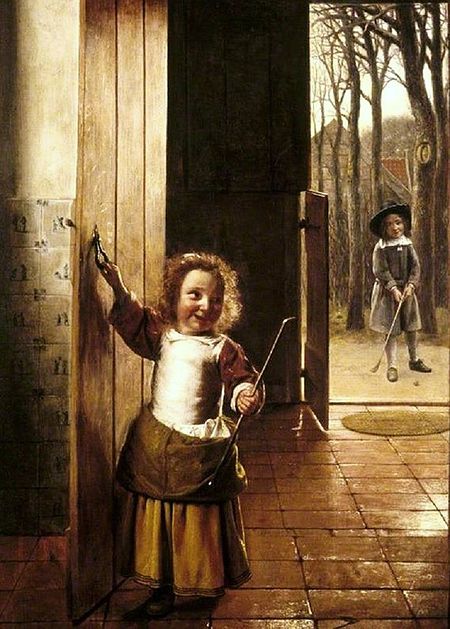 An unusually tight composition focuseds on two children,
the closest stretching to the latch of the open door,
its planks scratched across the grain.

She’s painted with the noise of kids, tousled red hair
back lit by the winter sky, happy enough to almost sing.
Her friend waits with the ball beyond the back door
top half swung against the wall, dark, indeterminate
the bottom, half open, slices light between the hinges.

It’s one of the clearest views of a house he ever painted.
Delft wall tiles show two acrobats at play in each blue space,
a couple of the terracotta floor tiles crack at the beginning
of the picture, a history of wear on fulcrums ricochets light
across the skin of the world. A fault line of narrow tiles
beneath the lintel showing what’s under our noses,
the wrinkles of a new day.

The floor’s paved with multiples of local tiles, glazed
by light pooling from each precious pane;
shadows softly remind you of multiple light sources
and open doorways. The rooms are not yet specialised
into bedroom, living room, study – though
the division of labour is gearing up fast.

This is the time when the Dutch invented the notion of home, at a time of great prosperity. He shows how good works and pleasure exist in ordinary life, even in housework or play.The new a middle class invented the idea of nuclear families living in houses, and of domesticity. Homes absorbed capital inflow, (the Dutch Empire was the richest in Europe speculating with capital, trading across the world, cornering the grain market among others).[4] They had a passion for owning art. One estimate from Delft probate inventories is that Dutch households had amassed over two and a half million paintings by 1660. Home and art comforted owners for being under the sea, or being surrounded by enemies, or may have eased anxiety from inflationary knowledge and technology, about how wild and large the planet seems to be spread beneath the stars.

Delft, absolutely Calvinist,was losing trade to Amsterdam and Leiden. It’s economy stagnant, de Hooch knows it and paints it mat, not shine. He moved from Delft to Amsterdam, a city darkly rich (though about to hiccup from war with England). He painted family portraits, of CEOs from Fortune 500 in interiors of diminishing interest, paintings within paintings, the self-reflexiveness that is art’s inalienable extravagance. This was all happening as Joan Blaue, in the world’s largest printing house in Amsterdam, is preparing the Grand Atlas, 600 beautiful hand-coloured inaccurate maps drifting wind roses and rhumb lines towards a distant hesitant scribble, the liminal margin of Australia.

If you could make one journey backwards in time, where would you go (not just standing in front of a picture), keeping art in mind? The art critic Simon Schama plumps for: ‘Amsterdam, 1660. The best bread; the best pictures; the most stunning streetscapes in the world; the most musical pubs; the glossiest dogs; the most dazzling women, the most arrogant men; no kings, no wars (for the time being), no bishops; Jews, books, harpsichords galore and… somewhere, Rembrandt van Rijn.’[5] Or Delft 1659?

I am a huge fan of De Hooch ever since seeing the first monographic exhibition devoted to him a the Dulwich Picture Gallery, autumn of 1998. ‘He looks like a lot of fun, but he’s no Vermeer’, the Independent critic sneered. I think he is just as good and never used a machine. As art historian (and Vermeer fanatic) Jonathan Janson writes of de Hooch: ‘His sophisticated treatment of light is comparable, if not superior in certain instances, to that of Vermeer. . . Particularly admirable is his ability to register, with the utmost fidelity, the reflections of light on ceramic pots, polished wood and glass.’[6] I am also a fan of Jan van Eyck, that first master of using thin glazes of oil paint for pots, wood, glass (and armour and angel wings), over two hundred years earlier. Simon Schama wonders how the ‘frugal Dutch’ in their golden age of still life art produced images of excessive consumption, ‘elaborately wrought and highly finished representations of objects that are themselves elaborately wrought and highly finished.’[7] Consumption is the key, the lure that we have developed and cannot shake.

Many critics (for instance Peter Sutton) believe that it was De Hooch, who was slightly older, who influenced Vermeer rather than the other way round.[8] There is no documentation that De Hooch and Vermeer were friends or had any professorial relations, but they must have known each other. De Hooch’s signature was added to various works by Vermeer, after his death, to increase their value, including his ‘The Art of Painting’.

De Hooch was born in Rotterdam in 1629, the eldest of five children to a bricklayer and a midwife. He studied in Haarlem and is documented for the first time in Delft in 1652. Two years later he married and had seven children and they moved to Amsterdam around 1660. The new paintings featured dark interiors of wealthy bourgeoisie, boring. His painting declined when he left the light behind.

Back to weeding in the passage Garden of the Seven Sages. 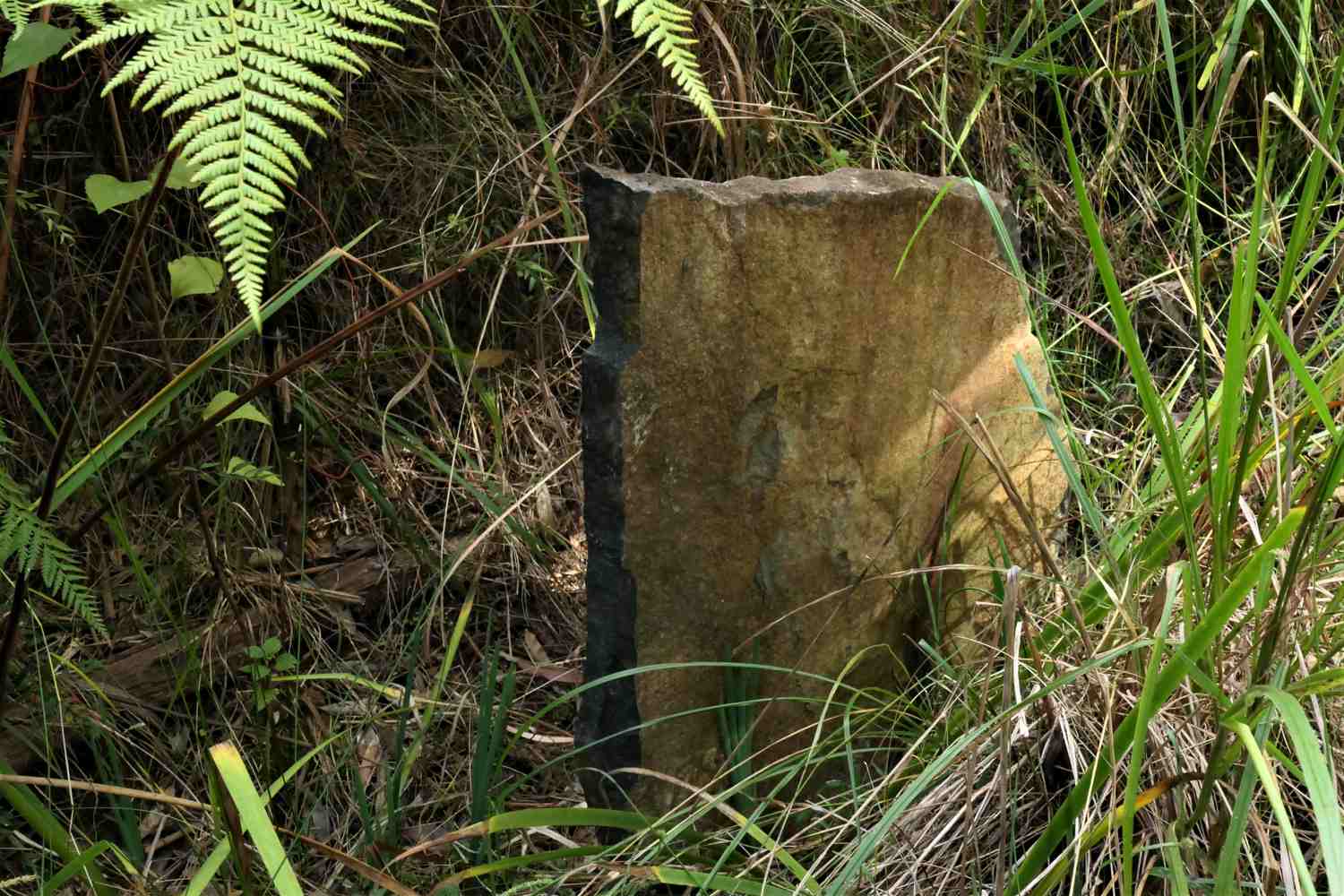 I take a photograph of one of the tools of my trade, light being another. 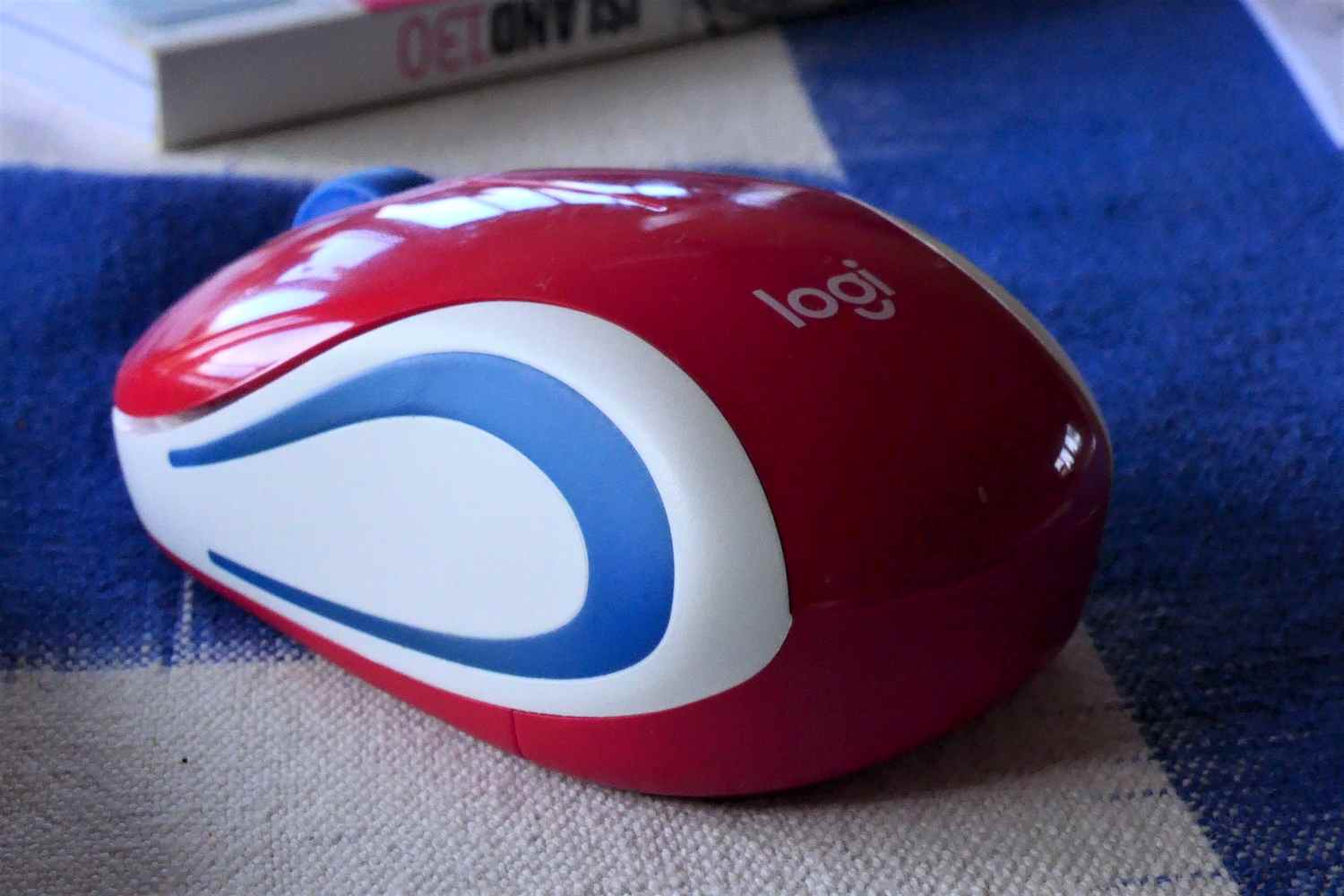 [2] Martha Hollander, An Entrance for the Eyes: Space and Meaning in Seventeenth-Century Dutch Art, Berkeley, CA: University of California Press, 2002, p153. Yet the eye doesn’t wander off, it catches the sensual nature of material matter. ‘De Hooch, I am suggesting, gave us for the ﬁrst and only time a wholly sensible world of touch and sight that was sufficient in itself, a world of things that was fully or properly knowable through the senses and thus which affirmed us in our sensuous nature.’ Jay Bernstein, Wax, Brick, and Bread: Apotheoses of Matter and Meaning in Seventeenth‐Century Philosophy and Painting, in Dana Arnold, Margaret Iversen, Eds., Art and Thought, John Wiley & Sons, 2008, p47.

[3] It is a myth that Filippo Brunelleschi (1377-1446) invented the technique and and demonstrated to his fellow Florentines in two dramatic peep-shows between 1405 and 1425.’Perspective, in transforming the ousia (reality) into the phainomenon (appearance), seems to reduce the divine to a mere subject matter for human consciousness; but for that reason, conversely, it expands human consciousness into a vessel for the divine,’ Erwin Panofsky, Perspective as Symbolic Form, tr. Christopher Wood (New York, 1991, p72. Perpendicular lines converge on a narrow angle of view for easygoing realism. Perspective was gradually developed, which we take for granted as natural, as reducing the world to human proportions and giving us access to objective nature

[4] ‘In Amsterdam, and in some of the great cities of that small province … the generality of those that build there, lay out a greater proportion of their estates on the houses they dwell in than any people upon the earth.’ Simon Schama quoting a contemporary source, The Embarrassment of Riches: An Interpretation of Dutch Culture in the Golden Age, London: Fontana, 1988, p297.