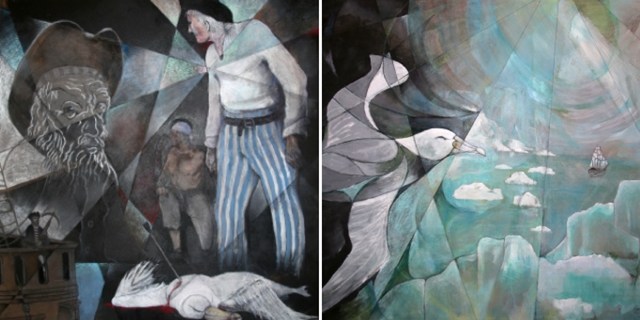 Geoff Mould, from the Rime of the Ancient Mariner series

We celebrated with Geoff Mould, Sawtell artist currently showing the Rime of the Ancient Mariner series at the Regional Museum.

Geoff is a Sawtell local of vintage years, but still making art, still teaching art and coaching Coffs Harbour’s first grade rugby team. He is one of Australia’s leading rugby coaches for NSW Country, Australian Barbarians and the Australian 21s. I was in conversation with him, and easy task, he’s a funny guy. I asked about his time at the National Art School with William Dobell as one of his teachers, and how art and sport seem to be on different continents with different languages.

Interestingly, in the last 40 years or so there have been many musical interpretations, but not visual – to mention a few:
Iron Maiden, heavy rock from the Album Powerslave;
The Tiger Lillies, cabaret multimedia project;
The English composer Howard Skempton, for piano quintet, French horn and double bass 2015, a lovely piece I have that focuses on the rhythm of the language; and then there’s
The Dead Poets electronica from a couple of years ago.
Geoff often listens to Shostakovich when he paints.

I then gave a brief overview of the Rime and sea poetry:

The Rime was written in 1797 and 1798, at the same time as the unfinished “Kubla Khan; or, A Vision in a Dream: A Fragment” which Coleridge said was inspired by opium, though not a full blown addict at the time. Both are dream worlds.

In Xanadu did Kubla Khan
A stately pleasure-dome decree:
Where Alph, the sacred river, ran
Through caverns measureless to man
Down to a sunless sea.

As an aside, when Genghis Khan was killed besieging Yinchuan, a Chinese city, Kubla Khan obeyed his last orders, slaughtering every last inhabitant, and it was said their language Tangut, was never spoken after 1226 (not true).

The Rime began life as a potboiler to make some money in partnership with Wordsworth, but then the poem transmuted after five months of hard work into an epic of life and death on the high seas. The Rime is a ballad, a mysterious story with archaic diction and a rhythm that’s seen as either hypnotic or clopping , and Coleridge himself thought it too pious, yet it’s still popular.A writer has to use the imagination and can invent realities. He had never been to sea, had only ever once crossed the Bristol Channel on the ferry to Chepstow.

The anonymous poem Seafarer, an Old English poem c 900AD, foreshadows Coleridge – the quest for redemption for a man alone at sea: ‘My soul unceasingly to sail o’er the whale-path / Over the waves of the sea.’

Joseph Conrad spent twenty years in the merchant navy, eventually commanding a ship sailing from Sydney to Mauritius. He often wrote about the sea testing the human spirit and the passing of the age of sail. He wrote, ‘The sea has never been friendly to man. At most it has been the accomplice of human restlessness.’ He captained steamboats on the Congo and his “Heart of Darkness” reveails his disgust at the violence. And now we are doing violence to the sea – with plastics, acidification, and overfishing.

Not everyone likes to go to sea. You may have heard Aboriginal elder Uncle Milton Duroux from the Solitary Islands history project. He grew up Pipe Clay (now Corindi Beach).
He says of the islands: ‘Oh there’s some stories but I don’t go out, cause if god wanted me to go out there he would’ve given me gills or flippers or something like that. I’m not one for going out on the ocean on a boat. I like to have the wajaarr (the land, the ground) under my feet.’

We celebrated World Poetry day by acknowledging the range and diversity of poetry and having an open reading where poets read their own poems about the sea, or poems by others.

There is such variety:

There was a Young Lady of Portugal,
Whose ideas were excessively nautical;
She climbed up a tree to examine the sea,
But declared she would never leave Portugal. Edward Lear

or a Japanese haiku by Basho,
seas darkening the voices of wild ducks my mysterious companions.

The sea is treacherous, 200 hundred years ago John Keats wrote in a letter
‘I was at home And should have been happy, – but I saw Too far into the sea.’

More than 3,000 migrants have died trying to reach Europe from north Africa in the last few years and in Australia individuals drown every week (280 deaths 2015/16).

Here’s a recent poem of mine:

‘Emergency services have suspended the search for a 22-year-old after he was swept out to sea at Valla Beach on Saturday, February 17, 2018.’

The helicopter and rescue boats have gone
but there’s everything else to see,
the river stippled in humid summer gold,
the sky thriving with colour. The sea pulls
and pushes the rocks and washes through the sand.

The river mouth is a new frontier, the breakers
scuffing blue. I find a body beached,
an alien spaceship with one gleaming black eye
and stubby ancient tail. I just don’t know.

Thursday 22nd
As the river empties small fish skip upstream
in shallow corners of the eye, half imagined.
Some lucky fisherman has left a fish tail flapping
in the tide and a rib arch for me to capture.
Past the bar the sea is still thrashing
and the young man still missing,
his body being rolled like a pebble
and rubbed, but not polished to shine.

I’ve been out there naked, pummelled,
skin soft as water, in slow motion
subcutaneous fat sliding off muscle,
muscles rippling as I try to keep my depth,
nervous bones feeling for the bottom,
the body enclosed inside an invitation.

The provocative horizon is locked between me
and the swinging weight of sea, language
shifts buoyancy as if some sort of life belt.