Birds are beautiful and they know it, Oct 7

Alfred Russel Wallace thought all ornament was linked to adaptive advantages, from security from predators, access to food or indirect benefits like better genes for the offspring. On the other hand, Darwin slowly came to the view that animals could appreciate beauty. 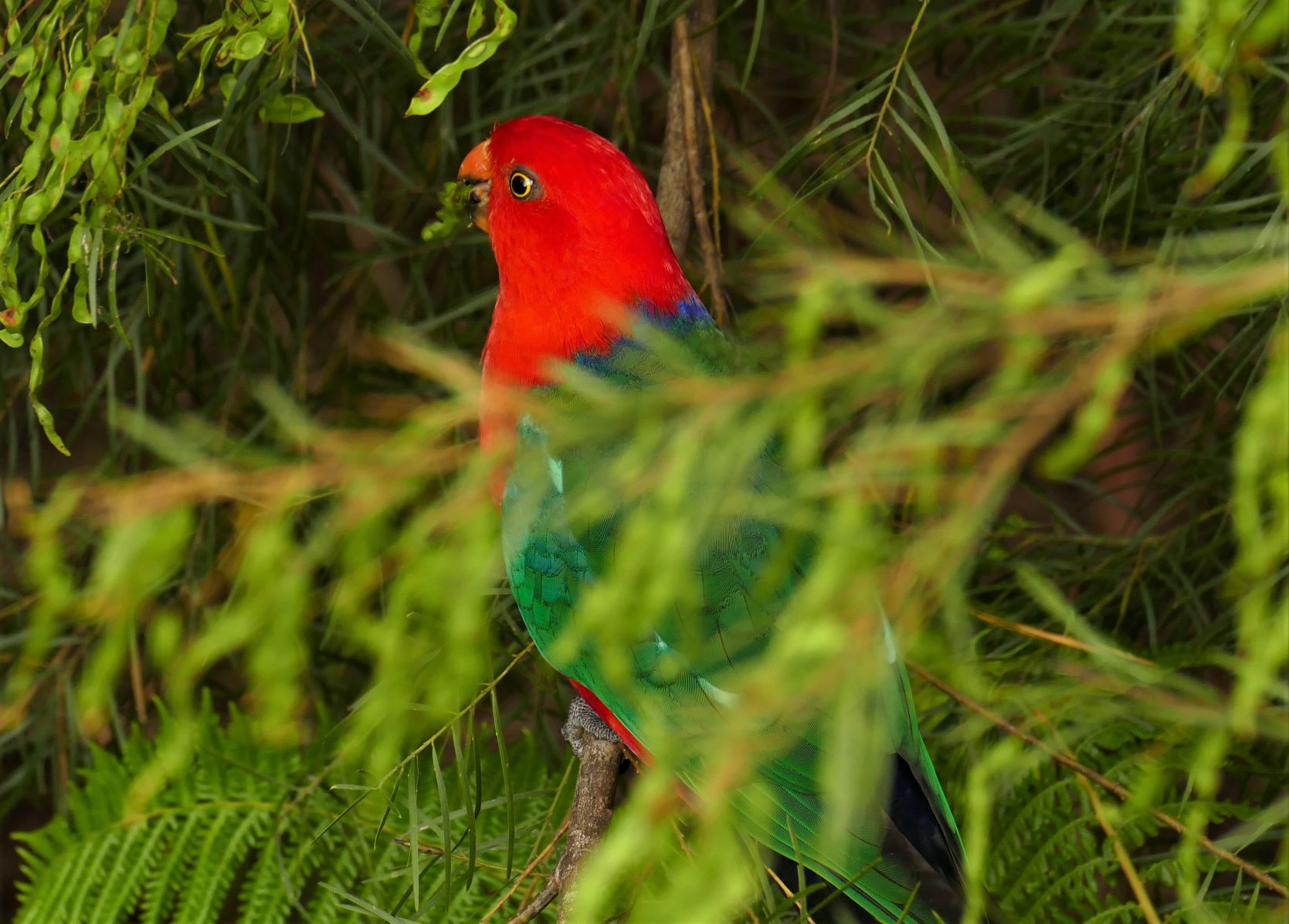 Arriving back from the Coffs Botanic Gardens we find the King Parrots are in our Acacia fimbriata, commonly known as the fringed wattle.

The peacock’s tail worried Darwin, and more, made him feel ‘sick’. It did not fit natural selection, as evolving fitness to the environment. In last book, The Descent of Man, he thought he had found the answer – ‘natural selection in relation to sex’ with animal and human aesthetics being a continuum. In 1882, just a few hours before his death, Darwin defended his view in a lecture to the Zoological Society: ‘Many naturalists doubt, or deny, that female animals ever exert any choice, so as to select certain males in preference to others. . . after having carefully weighed, to the best of my ability, the various arguments which have been advanced against the principle of sexual selection, I remain firmly convinced of its truth.’[i]

Ornithologist Richard Prum argues that there’s an evolutionary history of clues that shows us that these birds like beautiful things. It is their subjective sense that guides their mate choices.[ii] A peacock’s tail is not all about fitness and good genes.

There are still many who argue for beauty as a sign of fitness and advantage. Butterflies and birds are often brightly coloured, they can fly away from predators, while most flightless birds, or ones that nest on open ground, tend to be dull and camouflaged. Blue and ultraviolet-coloured feathers need to be well groomed to be vibrant – so a male demonstrates health (and time wealth) with a particularly intense plumage.

Evolutionary biologist Amotz Zahavi thinks the male peacock’s tail signals adaptive fitness by imposing a survival cost. Males who survive despite such a handicap are likely to have fitter genes.[iii] Stephen Jay Gould and Richard C. Lewontin have argued that not all biological traits are adaptations. Many traits are by-products of adaptations, or genetically linked to adaptive traits and not selected in their own right.

Michael Ryan argues that some species make use of their existing sensory preferences, that neural systems that help them find food and avoid predators can be repurposed for sexuality. For example, species that hunt for bright-coloured prey are likely to chase bright-coloured mates.[iv] 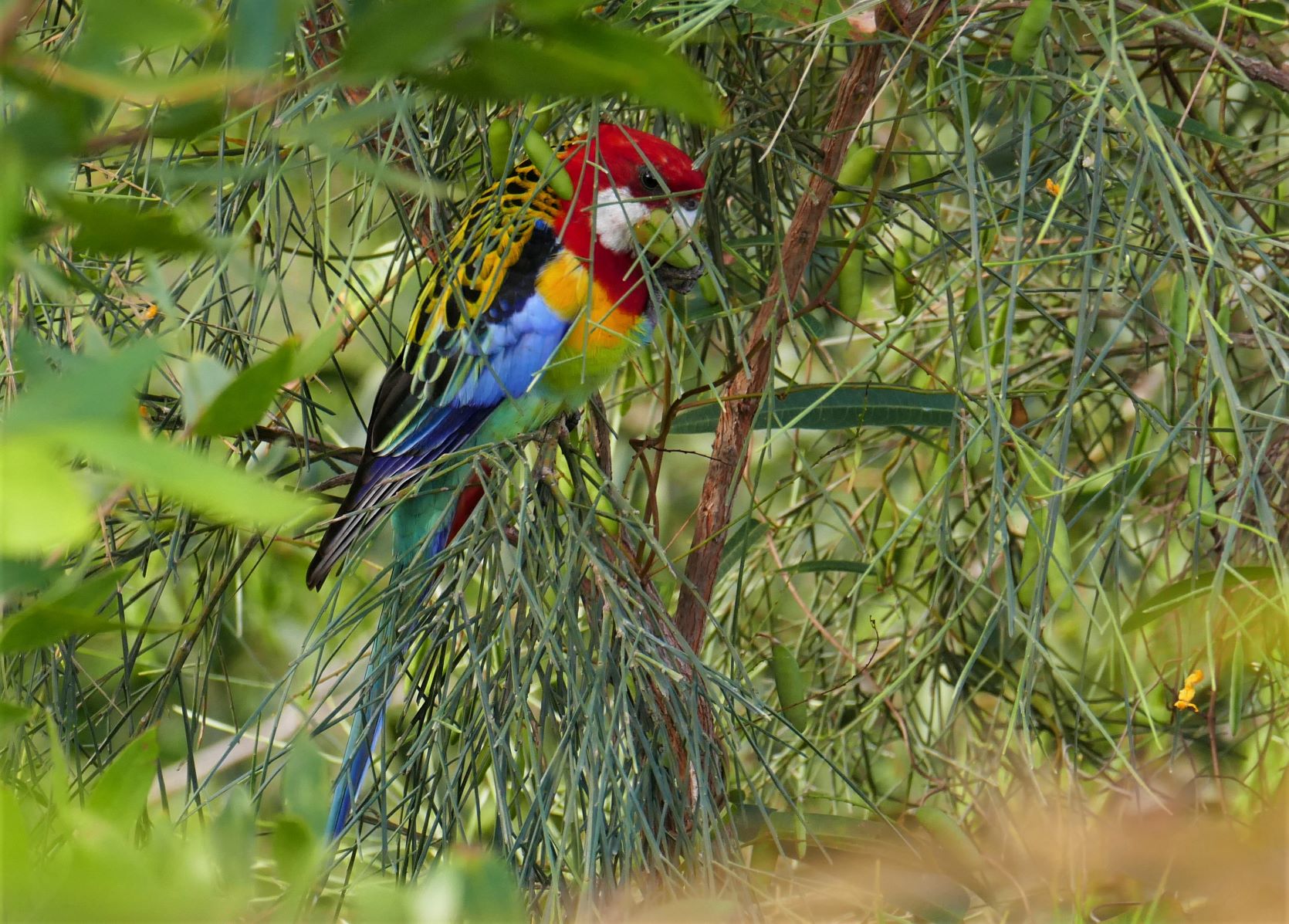 and Eastern Rosellas were in the wattle.

Satin Bowerbirds play a large part in these arguments. Environmental philosopher David Rothenberg begins his book on beauty as a selective vector in evolution with bowerbirds and asks, ‘Are not these spectacular creations beautiful works of art?’[v] He talks of beauty selection rather than sexual selection. Wolfgang Welsch notes of Bowerbirds, ‘The males build beautifully arranged and decorated bowers for the sole purpose of mating. In order to be able to do this, they must possess aesthetic sense (as do the females who choose their partner by evaluating the bowers). With bower-birds even the production of aesthetic artifacts seems to originate within the animal kingdom. Whereas beauty is usually invested in the male body, the male bower-birds are unimposing.’[vi]

Yesterday I was leaving Coffs Botanic gardens at the same time as a couple speaking a foreign language. On the spur of the moment I said, Hi. Can I show you something? Because there was bower a few metres from the entrance. They were from Karachi, Pakistan, had never heard of bowerbirds and were delighted. They were also amazed that I had spent Christmas in Swat Valley. The male Satin Bowerbird watched us from above. We should share the wonders.

I have undertaken an intervention designed to draw out the creative interconnectivities between a male Satin Bowerbird (Ptilonorhyncus violaceus) and Homo sapiens.  Previous studies have examined the complex behaviour of male bowerbirds in the building and decoration of bowers, and artists have been fascinated by their concern/obsession for objects as aesthetic ‘treasures’. See a short video on my experiment here.

I am lucky enough to have seem the two most beautiful birds in Australia: Gouldian Finches, Pentacost River, The Kimberley. And Red-bellied Pittas in Cape York.

Graeme Chapman, the Australian Field Ornithologist writes, ‘Red-bellied Pittas are one of the most beautiful and exotic birds to occur in Australia and also one of the most sought-after by keen birdwatchers. Unless you go to New Guinea, you have to visit the humid rainforests of northern Cape York Peninsula in the wet season – that is between December and March. Not only will you get wet, you may even be marooned by rising rivers or local flooding. Many people seek them at Iron Range, now easily accessible by vehicle, but few succeed. You can’t really risk staying there after mid-December and at that time they are only just arriving from New Guinea.’[vii]

[i] Darwin, ‘A preliminary notice: On the modification of a race of Syrian street dogs by means of sexual selectio’ [1882], 278. See Wolfgang Welsch, Animal Aesthetics, Contemporary Aesthetics, paper from 2004, available at: https://www.contempaesthetics.org/newvolume/pages/article.php?articleID=243

[ii] Richard Prum, The Evolution of Beauty: How Darwin’s Forgotten Theory of Mate Choice Shapes the Animal World—and Us, Doubleday, 2017

[iv] Michael J. Ryan, A Taste for the Beautiful: The Evolution of Attraction, Princeton University Press, 2018. See Charlie Tyson, ‘Why Professors Distrust Beauty’, The Chronicle of Higher Education, 3.6.2018. ‘A shift from the ascetic to the aesthetic is underway. At its center: evolutionary biology.’ ‘Female guppies, for example, feed on orange fruit and prefer males with orange coloration. Why? Because male guppies have evolved orange coloration to take advantage of a general attraction to orange that arose first in the realm of food preference, then migrated to mate preference.’