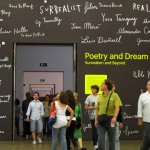 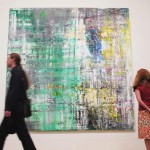 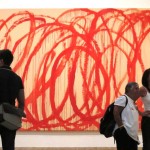 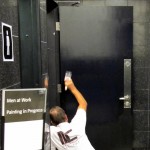 A homage to John Cage who declared “I have nothing to say and I’m saying it.”

“By ‘modernity’ I mean the ephemeral, the fugitive, the contingent, the half of art whose other half is the eternal and the immutable.” Baudelaire 1863

The work sucks attention into the canvas,

the eye seeks form in this other world of oil strokes,

streaks and rivulets rippling across the field of view.

Art is cannibalistic, that’s its temperament

and though art has become a brand  for international capitalism,

with no boundaries it’s a reminder of our ghostly presence.

The philosopher Richard Wollheim could spend hours watching a painting, “it was only then . . . that the picture could be relied upon to disclose itself as it was. I spent long hours . . . coaxing a picture to life.” We don’t have that passion or patience. A study found that people who had rushed and queued to see the world’s most famous painting gazed on the Mona Lisa for an average of 15 seconds.

New Year’s Eve 1978 – Roland Barthes, inspired by some Twombly drawings, took a pen to paper but found it incredibly difficult to draw ‘a line that isn’t stupid’.

“They literally consist of nothing more impressive than enormous white canvases covered from head to foot in loops of red paint. Some of the loops have dribbled down the canvas. These are described by the blurb accompanying the paintings as ‘sanguine floods of paint that ooze and cascade down the canvas.’ . . .  Twombly was probably too lazy to let the work dry properly, and returning to find that the colours had run, sat down in a heap on the floor and tried to dream up some pseudo-philosophical justification for his negligence.” Harrywaight’s Blog, Oct 2010.

In July 2007, the artist Sam Rindy left lipstick traces on a Twombly painting. She said she kissed the artwork because she was “overcome with passion. . . I stepped back. I found the painting even more beautiful. . . . This red stain is testimony to this moment, to the power of art.”

One way we can tell that is by its power and the fact that every culture has art, and we feel strongly about art.

John Berger writes: “I can’t tell you what art does and how it does it, but I know that art has often judged judges, pleaded revenge to the innocent and shown to the future what the past has suffered, so that it has never been forgotten. I know too that the powerful fear art, whatever its form. . .’[i]

The philosopher Richard Wollheim often spent four hours in front of a painting and  recommended looking for 2 hours: “I evolved a way of looking at paintings which massively time-consuming but also deeply rewarding, For I came to recognise that it often took the first hour or so in front of a painting for stray associations or motivated misperceptions to settle down, and it was then, and only then, with the same amount of time or more to spend looking at it, that the picture could be relied upon to disclose itself as it was.”[ii] He was thinking of his favourite painter Poussin. The critic Timothy Clark spent six months looking at two paintings by Poussin for his book The Sight of Death, he was lucky to be still alive to finish it.

We don’t have that passion or patience. The Louvre found that people despite queing up to see its most famous painting looked at the Mona Lisa an average of 15 seconds. We don’t have to be so serious, though art is serious play. What repays attention – that’s my definition of good art – rather than Damien Hirst’s definition of great art, and I quote, “Great art is when you walk round the corner and go, ‘Fucking hell! What’s that?’” This is a modernist approach – Diaghilev demanded of his dancers – “Astonish me!”

The critic James Elkins argues, “It seems artificial or unnatural to look closely: after all, it runs against the grain of today’s very distracted, fast-motion seeing. And yet poets do it all the time: close reading is part of good reading.”[iii] Qualities of attention characterise artists as well as critics. The eco artist Andy Goldsworthy was “really annoyed” at having to be guest of honour at the gala dedication at Stanford of Stone River, a 320-foot-long, 128 ton flow of sandstone (taking him into land art territory). He’d been photographing the work from before sunrise, as the light changed. He said. “I’ve stayed here watching it the whole day. I’ve seen incredible changes.” And complained that there was now “a gap in my understanding of the piece.” How many of us can we offer a fraction of that attention to anything other than love?

[i] John Berger preface to the catalogue Here Is Where We Meet, 2005. He continues optimistically, “ when it does this, and that among the people such art sometimes runs like a rumour and a legend because it makes sense of what life’s brutalities cannot, a sense that unites us, for it is inseparable from a justice at last.