The French pavilion by Christian Boltanski, vast scaffolding running pictures of new born Poles and dead Swiss, life and death blurs, press a button and a klaxon grinds it all to a halt.

‘Track and Field’, the north American pavilion. A Centurion tank upturned on the lawns of the Giardini, an athlete running on top, her treadmill turning the giant tracks a mechanical grinding. The tank looks helpless as a tortoise until that infernal noise starts up, life and death again. 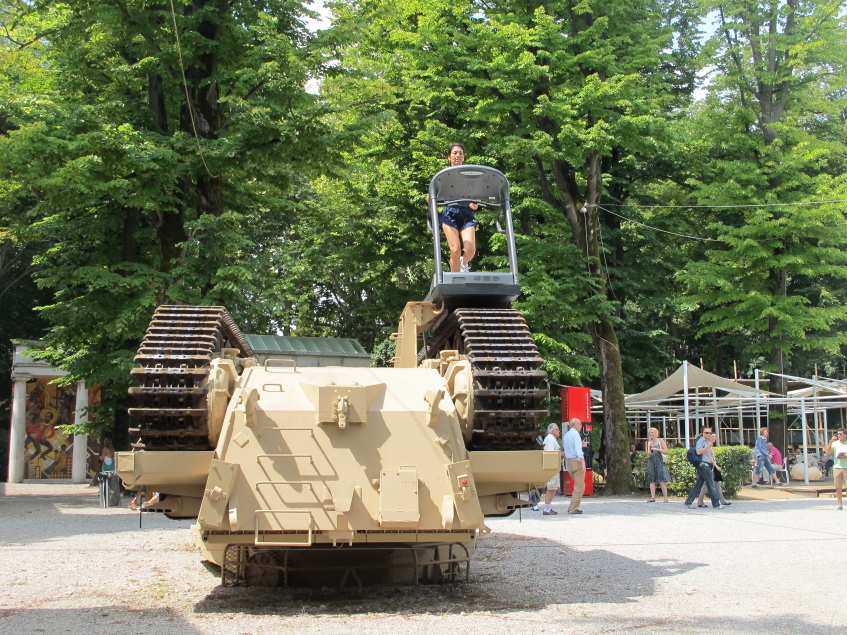 The Golden Lion for a national pavilion went to Christoph Schlingensief and his dark German Gesamtkunstwerk, so over the top,overpowering and yet mesmerising. A church transformed with objects and flickering screens. A weird crucifixion complete with bicycle hangs over the altar adorned with a hare referring to Durer or (more likely) ‘How to Explain Pictures to a Dead Hare’, by Beuys – you do it by holding tight a dead hare. Flickering images include his old films and X-rays of his black lungs that killed him last year. Death and life again.

Outside the two main areas, The Iraqi Pavilion was all about water, a successful show I thought through a coming together by five different artists. Nearby is the ‘Memory of Books’ a site-specific installation by Chiharu Shiota in collaboration with the Gervasuti Foundation using books she found there (part of the Foundation’s library) piled on a desk with a seat but impossible to reach being in the centre of a web of thousands of strands of black wool intersecting walls, floors and the ceiling of the space.

The Australian Pavilion was very disappointing (best known for its glad bags at the opening, but provided the funniest moment when I asked the young woman minding it what she recommended in the outside venues (Zimbabwe – we didn’t get to) and told her I’d asked the guy selling me the tickets the same question and he replied, “I don’t know. I come from the other side of Italy. I hate Venice.” She was gobsmacked, astonished. It reminds me of being in Rome during the last World Cup and surprised how uninterested they were, being parochial and obsessed with Roma.

An honourable mention should go to the cafe for their work of art – a crab sandwich (white bread with the crusts cut off) – art can be so decadent.