The World Health Organization has cast doubt on the usefulness of antibody tests for Covid-19 . . . initial evidence did not suggest large numbers of people were developing antibodies after having the virus, meaning the chances of creating “herd immunity” were not high. BBC

Health bosses in England are preparing to ask doctors and nurses to work without full-length gowns when treating patients, as hospitals are set to run out of supplies within hours. Guardian

We forget our trespass, our British past, the brutality of our regime, black and white, what we did here and how we survived that first year or two (while the locals died of the pox).

January 1788. After three days in Botany Bay, Phillip realised that the site was useless for founding a colony. It had poor soil, limited freshwater supplies and was exposed to strong southerly and south-easterly winds. Port Jackson, a little further north, was a fantastic site, yet by May, the British were experiencing severe food shortages. Many cattle had wandered off, and in July, the first farm’s first wheat harvest failed due to rats, poor soil, no fertiliser and being planted out of season. The seasons took some getting used to.

The convicts ate anything to hand kangaroos, possums and birds, including emus. The ship HMS Supply was sent to Lord Howe Island, to collect turtles many had been seen earlier in the year, but it returned empty. The fish in the harbour were much less plentiful in winter.  In December, Charles Wilson, a convict aged 27, was the first to die of starvation.

The convicts suffered from a deficiency in vitamin C caused which leads to scurvy, a most feared disease by sailors, open wounds, bleeding gums, loose teeth and skin rashes and death. They were saved by the bush tucker in our garden Tetragonia tetragonoides (warrigal greens and Commelina cyanea (scurvy weed). The Cadigal also ate Dianella caerulea (blue-flax lily), Prostanthera ovalifolia (mint bush), which we have and Carpobrotus glaucescens (pigface) that is found on the dunes.

In October 1788, the Sirius was sent to Cape Town to gather supplies for the colony. Phillip cut rations to half and abandoned public works. All effort was on finding food. March 1789, six marines were hanged for consistently stealing from the near-empty public stores. In May the Sirius returned with little more than four months’ worth of flour. By the end of the year, the colony was near starvation.

The Second Fleet arrived in June 1790, carrying provisions but also another thousand or more mouths to feed, and many sick and dying. It was a commercial venture on the cheap, its mortality rate was 40% compared to the First Fleet’s mortality rate of 5.4 per cent.

There will be starvation in the world from this virus, (Coronavirus could double number of people going hungry. Guardian, April 9) and there already was. ‘Only 40 countries worldwide are on track to eliminate chronic child malnutrition in the next 10 years. Instead, rates of undernourishment are on the rise in South America and Africa.’[1] Southern Africa has been in severe drought and then widespread flooding, millions were hungry at the turn of the year 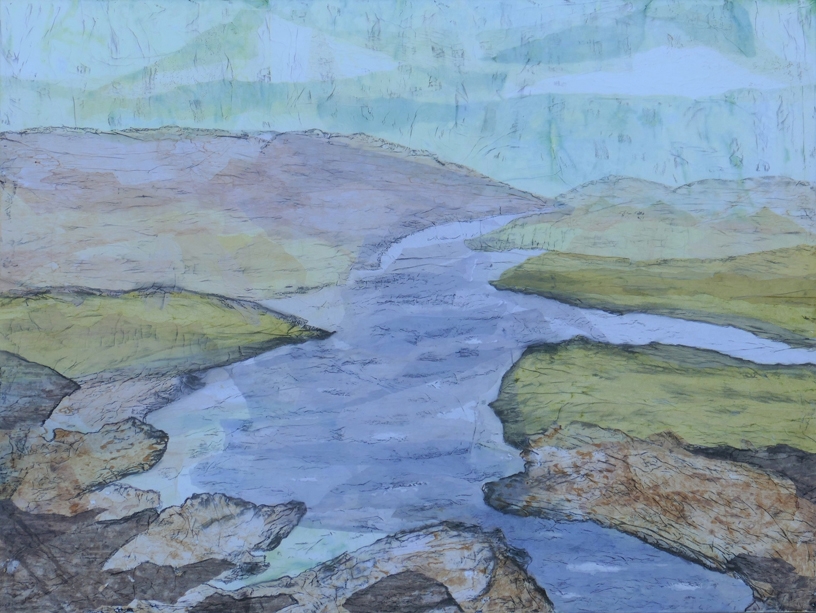 Commelina is vigorous invasive plant with creeping stems shooting roots at their joints and it produces seed. Wyn harvests them for her art and I pull them out. She picks the flowers early in the morning when they are their best, collecting the delicate flowers with tweezers. The flowers close as the light leaves then fall, hence their common name ‘dayflowers’. Depending on the mordant, the petals produce a blue or green dye. 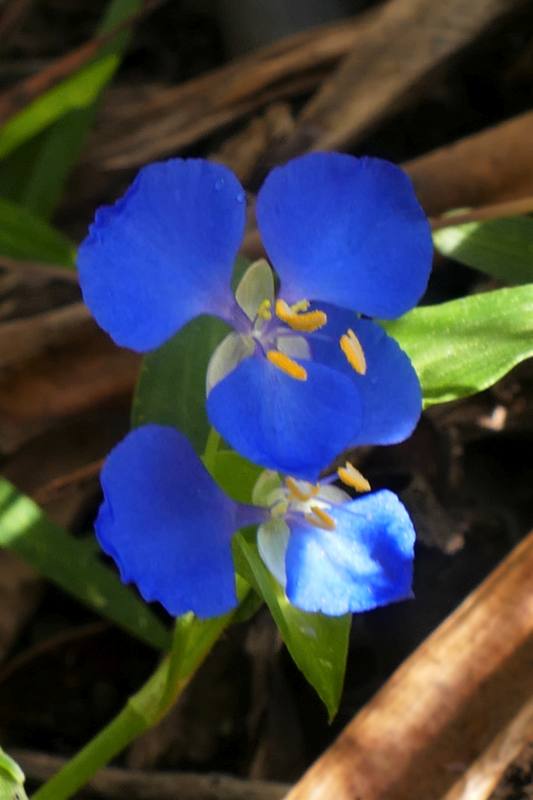 This flower is a vibrant specimen, lucky enough to have found the vegetable garden which we net, weed, water, compost and mulch with sugarcane.

Novalis was an obsessive romantic for whom poetry is life is nature is dream is a mystical world. The young protagonist in his unfinished novel, Heinrich von Ofterdingen, dreams about a blue flower which obsesses him and which will offer a dream-like state of consciousness which will help him write and compose. When published in 1802, the ‘blue flower’ became an archetype of romance. 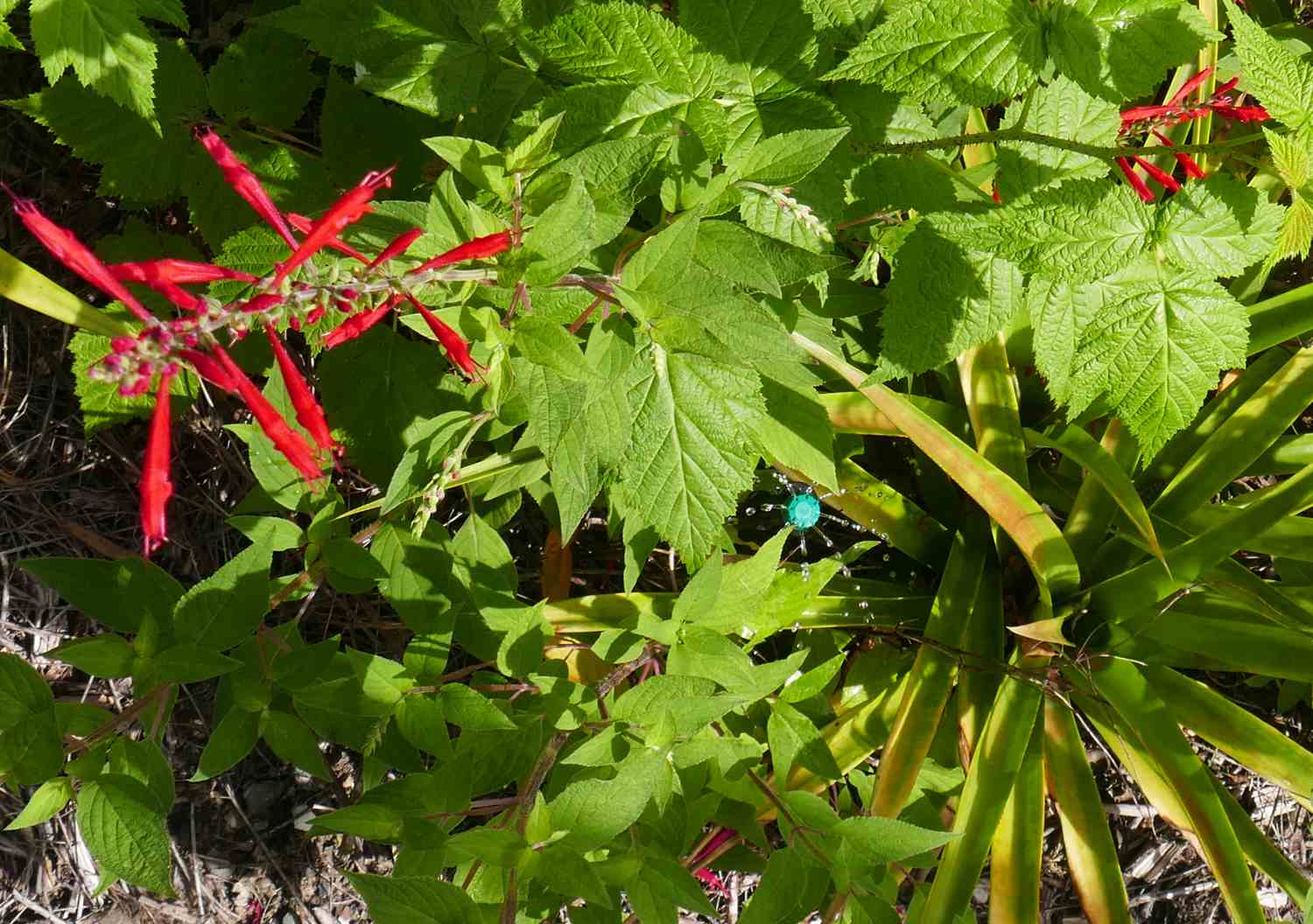 Watering, Red Sage (for insects), Pineapple (for us)

That romantic world is over-hyped and bourgeois. The blue flower of German Romanticism is useless here and now. Walter Benjamin had a mystical bent, from his Jewish side, but wrote, ‘No one really dreams any longer of the Blue Flower. Whoever awakes as Heinrich von Ofterdingen today must have overslept . . . No longer does the dream reveal a blue horizon. The dream has grown gray.’[2] The right wing elements in Weimar were nostalgic for such a lost past, just as the alt-right is today. Benjamin was a left-wing thinker sympathetic to the Frankfurt School, worried about modern life lacking depth. He thought we need an everyday aesthetic. Symbolism is dead.

Siegfried Kracauer explored distraction a modern form of aesthetic attention providing a Gesamtkunstwerk of effects.[3] He suggested that distraction can focus the chaotic state of the world. We tend to blame television particularly for an, ‘ontology of everyday distraction’.[4] Benjamin used Kracauer’s ideas to argue that the new mass-reproduced arts allow us insights into capitalism and opportunities for change. We cannot watch a film with the unbroken attention we direct towards a painting. Optimistically he thought montage technique has a liberating potential, allowing the worker to experience the world as malleable. And if it can be manipulated, it can be changed.[5] Now that personal screens have become ubiquitous, we can see this was wildly optimistic. Change is occurring, but it’s all one way towards larger human populations, more consumerism, and more destruction to natural environments. What we need is to feel the power of natural environments, the elements, the fauna and flora we once were intimate with. 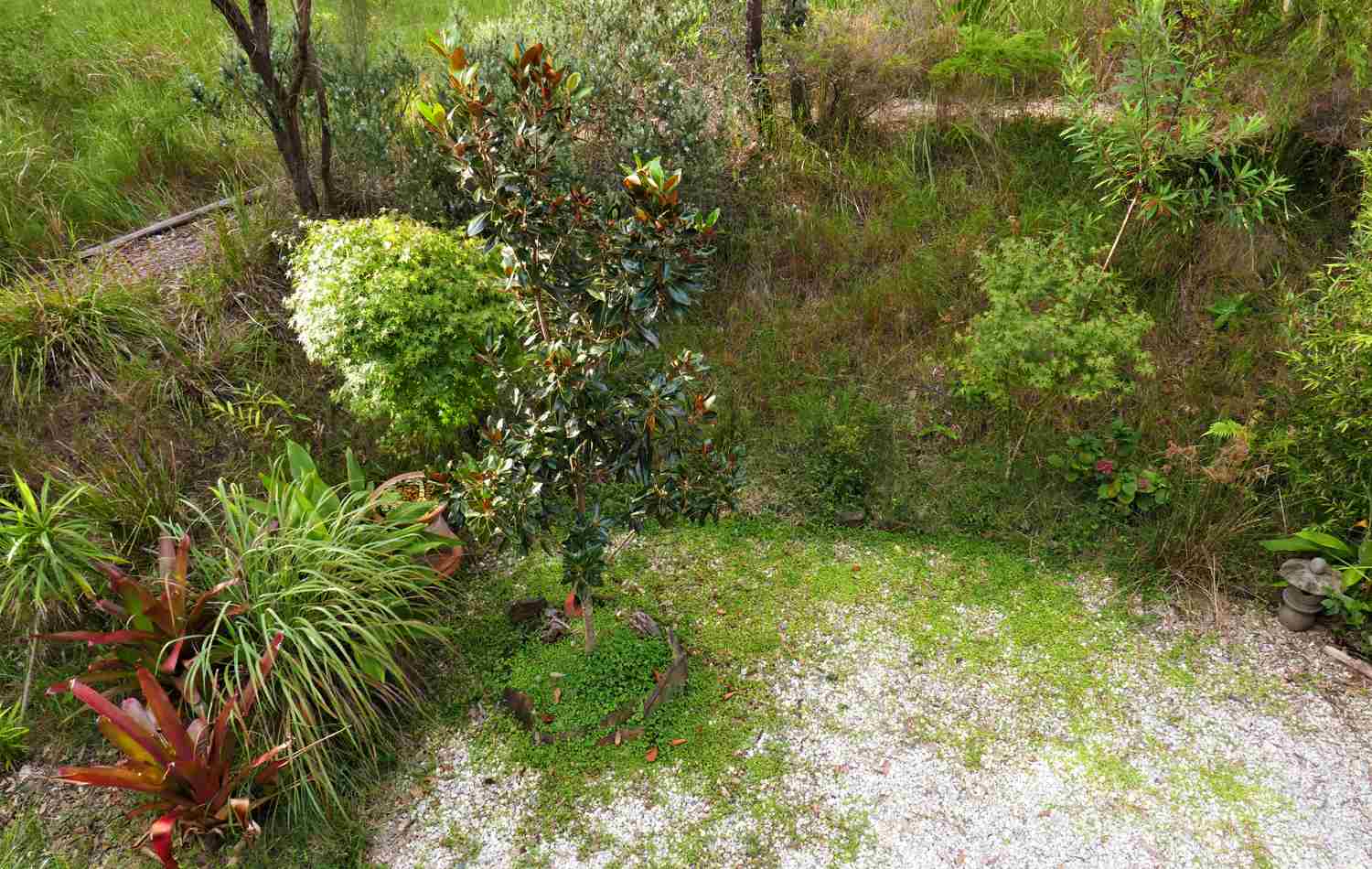 Hydrangea in the Asian garden, with Magnolia, Japonica, maples, gingers

Can Rilke help? I don’t understand his attraction, the myth of the poet as seer (Lady Gaga has a Rilke tattoo). One of his best selling books is ‘Letters to a Young Poet’ (1903), definitely not a useful manual for poets.[6] His four stanza blue flower poem ‘Blaue Hortensie’ (Blue Hydrangea) is not to my taste. To give you a taste, the best I could find of the last stanza are:

From ‘New Poems’, written summer 1906. Less overly romantic perhaps than previous poems. Rodin had told him to focus on the world, but I don’t agree with some critics claim for Rilke’s new direction as ‘factual precision’.[7] 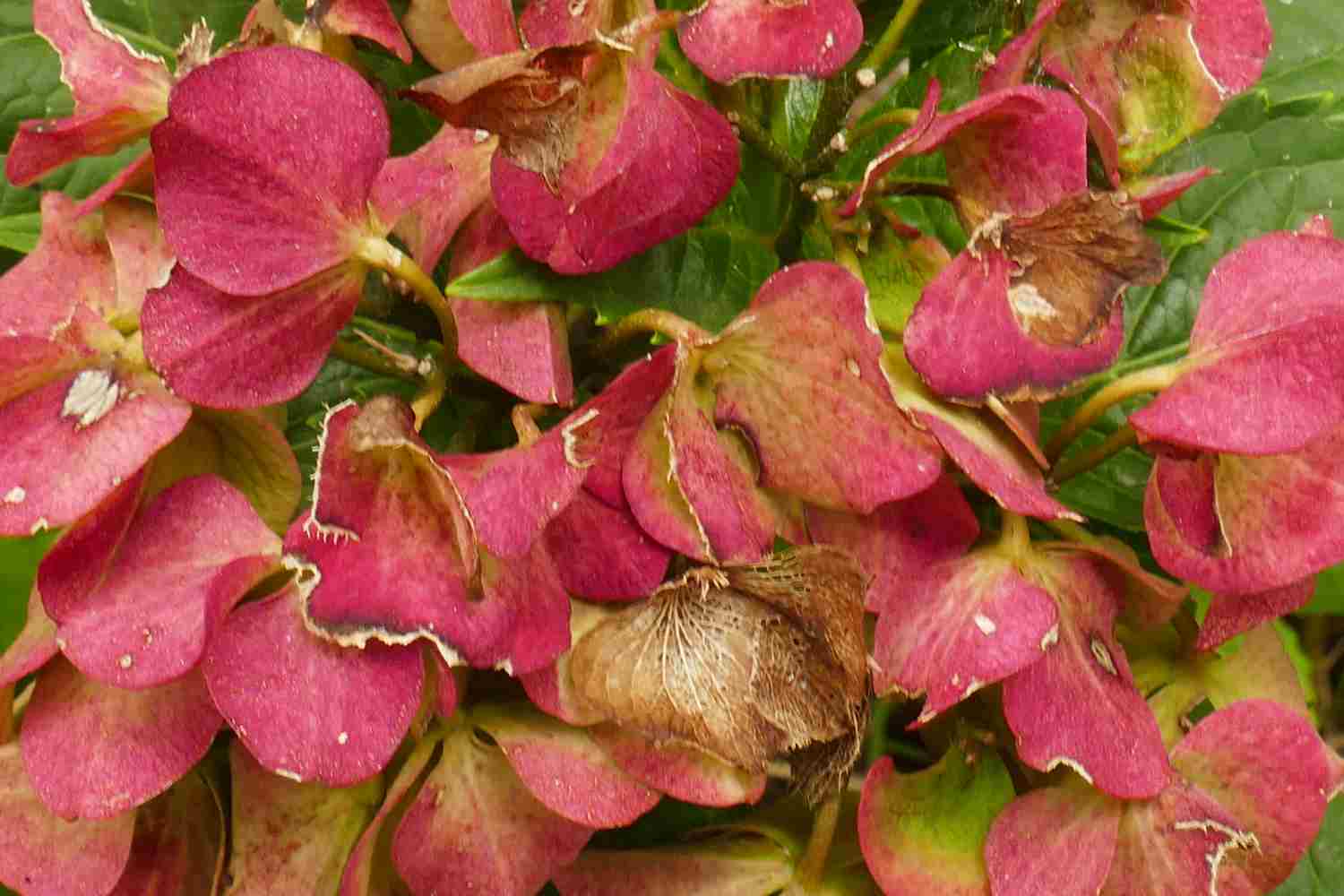 Our flowers are red, an alkaline soil and the leaves burn off in summer, it it is not very happy but hangs in for the cooler moths. It was a present and grows in the Asian garden among other gifts, the maples, or self seeded plants like the slender Water Gum behind. 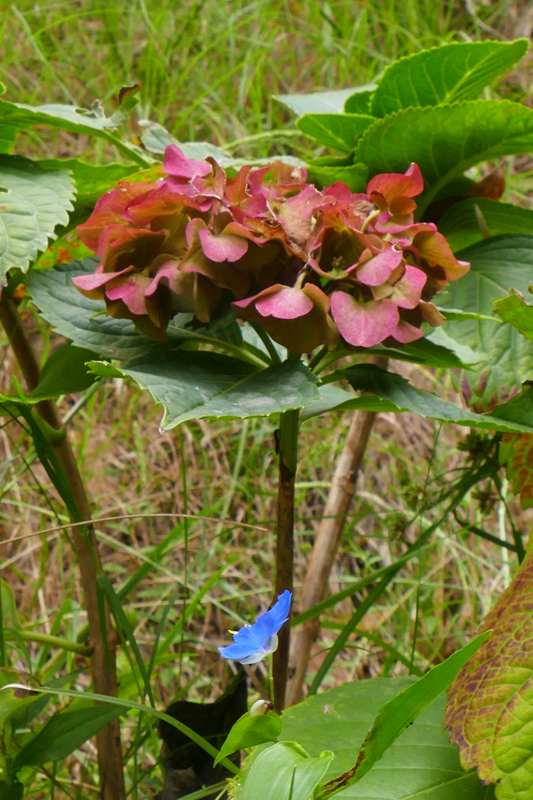 The opening to his First Elegy of the Duino is one of his most famous lines, Who, if I cried out, would hear me among the angelic orders? (Wer, wenn ich schriee, hörte mich denn aus der Engel Ordnungen?), (Trans., Edward Snow). My angelic orders are the beautiful raucous corellas that have appeared here in the last few years. They couldn’t hear a siren above the racket they make.

No need for blue or red. Our oriental Osmanthus was given to us by neighbours who didn’t want it. It has hardly grown in ten years, but flowers almost continually, when you walk down the stairs into the garden the scent energises you. In Chinese mythology Osmanthus fragrans flowers (gui hua) grow on the moon. They are a traditional symbol of Love and Romance. 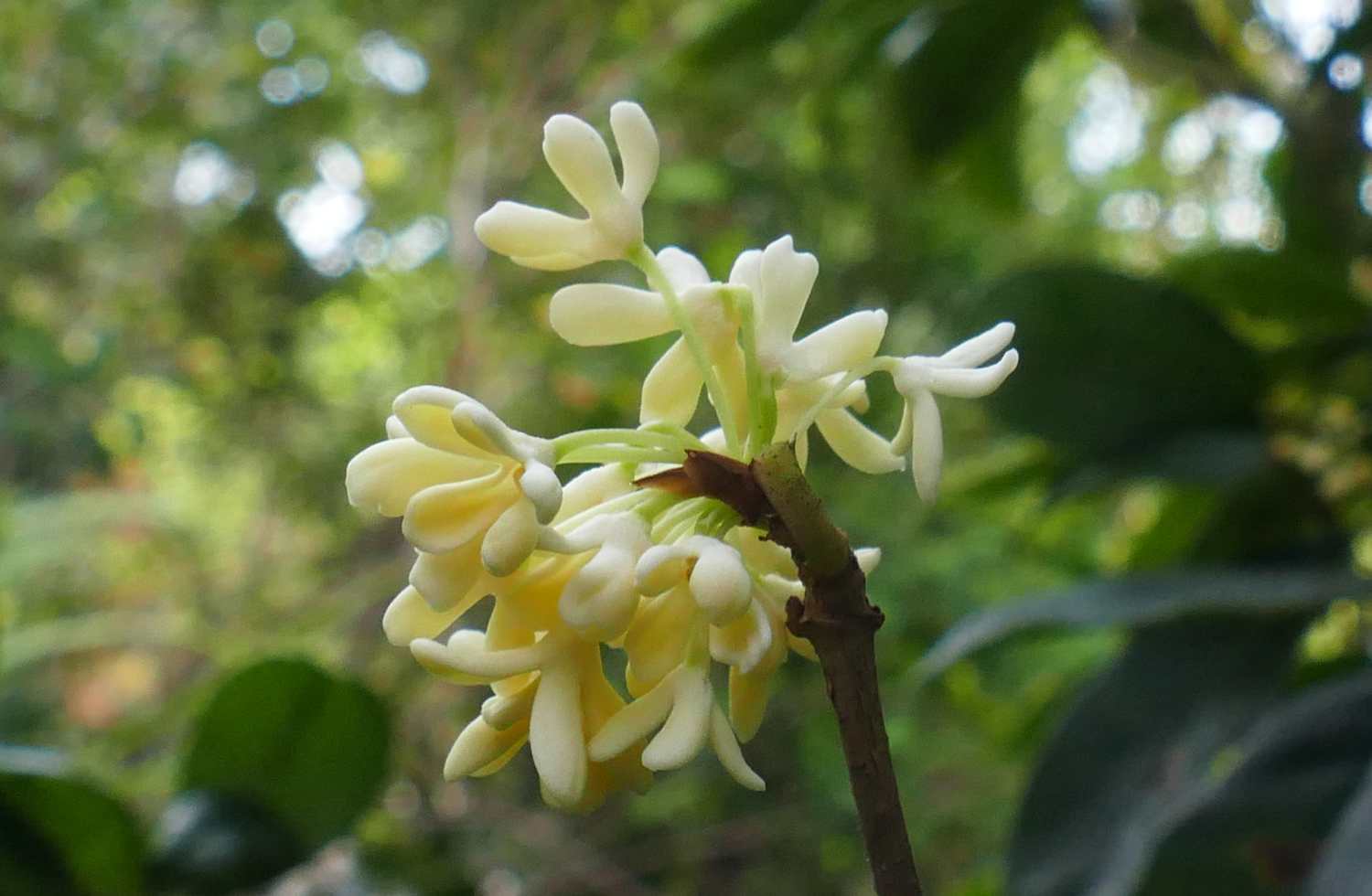 Dear John B, This will bring a smile to your face. Love, Georgie

We took a walk down to the creek this morning and were shrieking with joy when we saw this little man up in the tree. We saw him about half way down the dirt road on the right hand side. I have attached some photos. It’s the first koala I have seen around here for a very long time.

[3] He argued that a movie audience being bombarded by information has no time to think about or make sense of what they are experiencing, and this satisfie4s the workers’ need for entertainment and distraction to escape the humdrum tedium of everyday life. Siegfried Kracauer Theory of Film: The Redemption of Physical Reality, (1926) OUP, 1960.

[4] Margaret Morse, ‘An Ontology of Everyday Distraction: The Freeway, the Mall, and Television’, in Patricia Mellencamp, ed. Logics of Television: Essays in Cultural Criticism, Bloomington: Indiana UP, 1990, p193.

[6] I agree with Rilke, ‘Read as little as possible of literary criticism — such things are either partisan opinions, which have become petrified and meaningless, hardened and empty of life, or else they are just clever word games, in which one view wins today and tomorrow the opposite view.’ Rainer Maria Rilke, Letter 3 to Franz Xaver Kappus, April 23, 1903, Letters to a Young Poet, D. H. Norton, Trans. Norton, 1993.