Scientists investigate cases of post-Covid-19 fatigue: Some sufferers report long-term symptoms such as difficulty concentrating and aching muscles. The Guardian

$2.5 billion lost over a decade: Nigerian princes lose their sheen, but scams are on the rise. The Conversation

Dramatic decision to shut border for first time in 100 years as Victoria’s cases surge. The Age

Ugly truth: Trump’s promise of a fading pandemic and a roaring economy has gone. The administration’s response to COVID has been full of delusions and magical thinking. It sets up an ugly year’s end. The Age

Koalas are notoriously difficult to detect. Traditional methods are costly and labour intensive. So we found a more efficient way to locate koalas in eastern NSW, using drones. The Conversation

Trump claims victory as US nears 130,000 coronavirus deaths.  The Guardian

This revolutionary product converts your tap water into a disinfectant. Time of India

As the planet continues to warm, extreme weather events such as heatwaves and heavy rainfall are becoming more frequent, intense and longer, according to global weather data. The Conversation

Zoonotic pathogens, which include not only COVID-19, but HIV/AIDS and Ebola, have increasingly emerged due to stresses humans have placed on animal habitats, according to a new United Nations report.  NPR

The forest glows as if alien photons are rising slowly from underground, floating upwards not sifting through the canopy from the full moon – an uncanny bliss, which passes.

An hour later I photograph the moon falling, then turn to the forest and see Janus.

First sight of a new joey, staring directly at their abundant world, mother looking behind, grooming her back.

On my way to the doctors, I stop for the sign. Kangaroos are often grazing next to the road here and sometimes Red-necked Wallabies, but usually earlier.

Across the road, light cascades down the rigging of the parasite, a beautiful veil of dodder. This parasite is clearly alive and flourish (I battle with it in our garden). CIVID-19 could be considered a parasite except  viruses are not considered to be true living organisms by most scientists. I call it a parasite, that’s its modus operandum.

I arrive in the village renewed, strewn with families, first day of the school holidays, as if the past few months is a dream. Taking a photograph on the boardwalk, I notice a woman taking one of the shore, not the obvious view of two rivers feeding a ravenous sea – teeth showing. 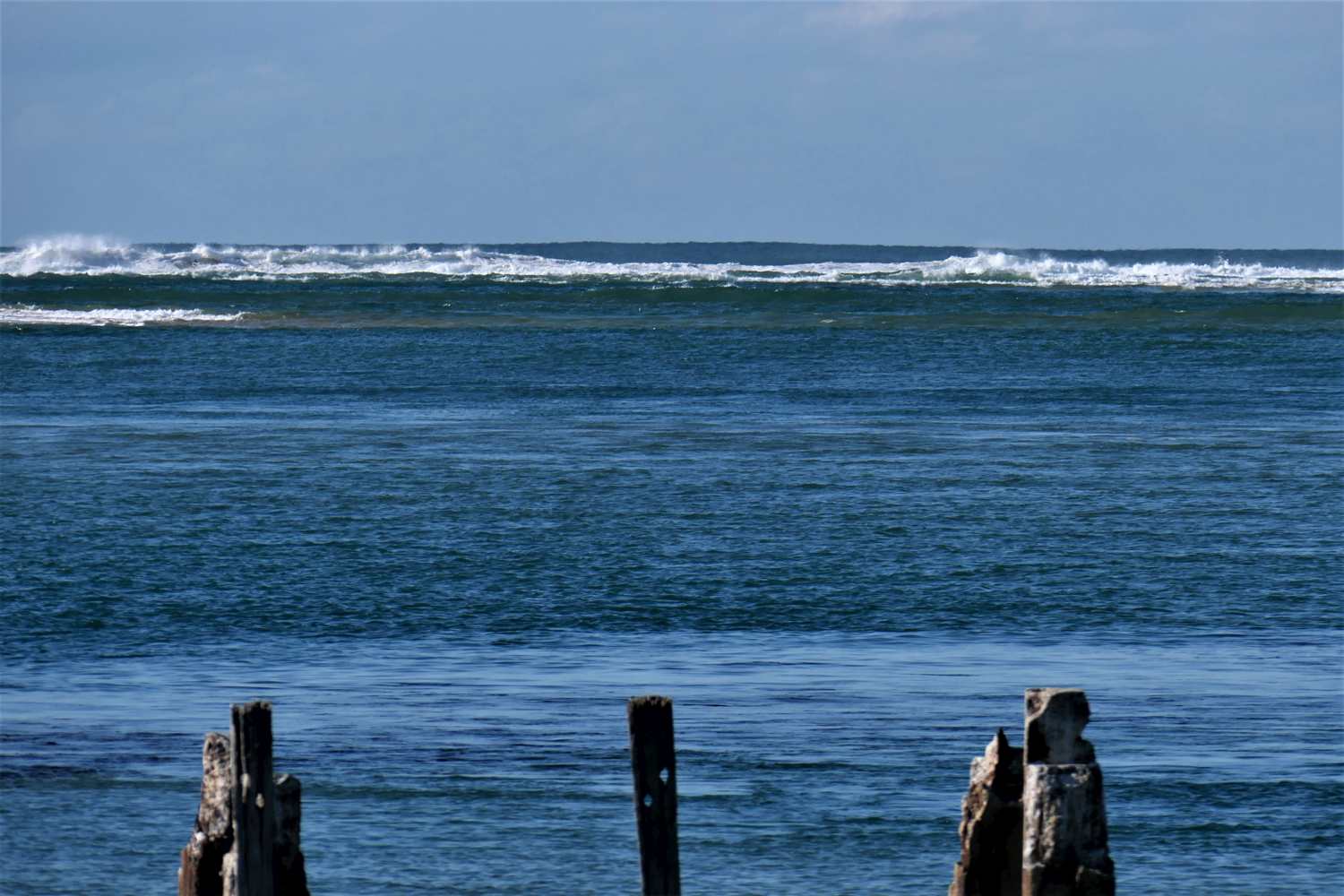 ‘Are you a landscape photographer’, I ask, then realise at once, she’s in a black suit, ‘Oh, you’re a real estate agent.’ She laughs, ‘I bet you’re a better photographer than me.’ I shout after her, ‘You can hire me!’ We are not that different. My photographs are also instrumental, not art. The majority exist to bear witness to my experiences –too literal for art. 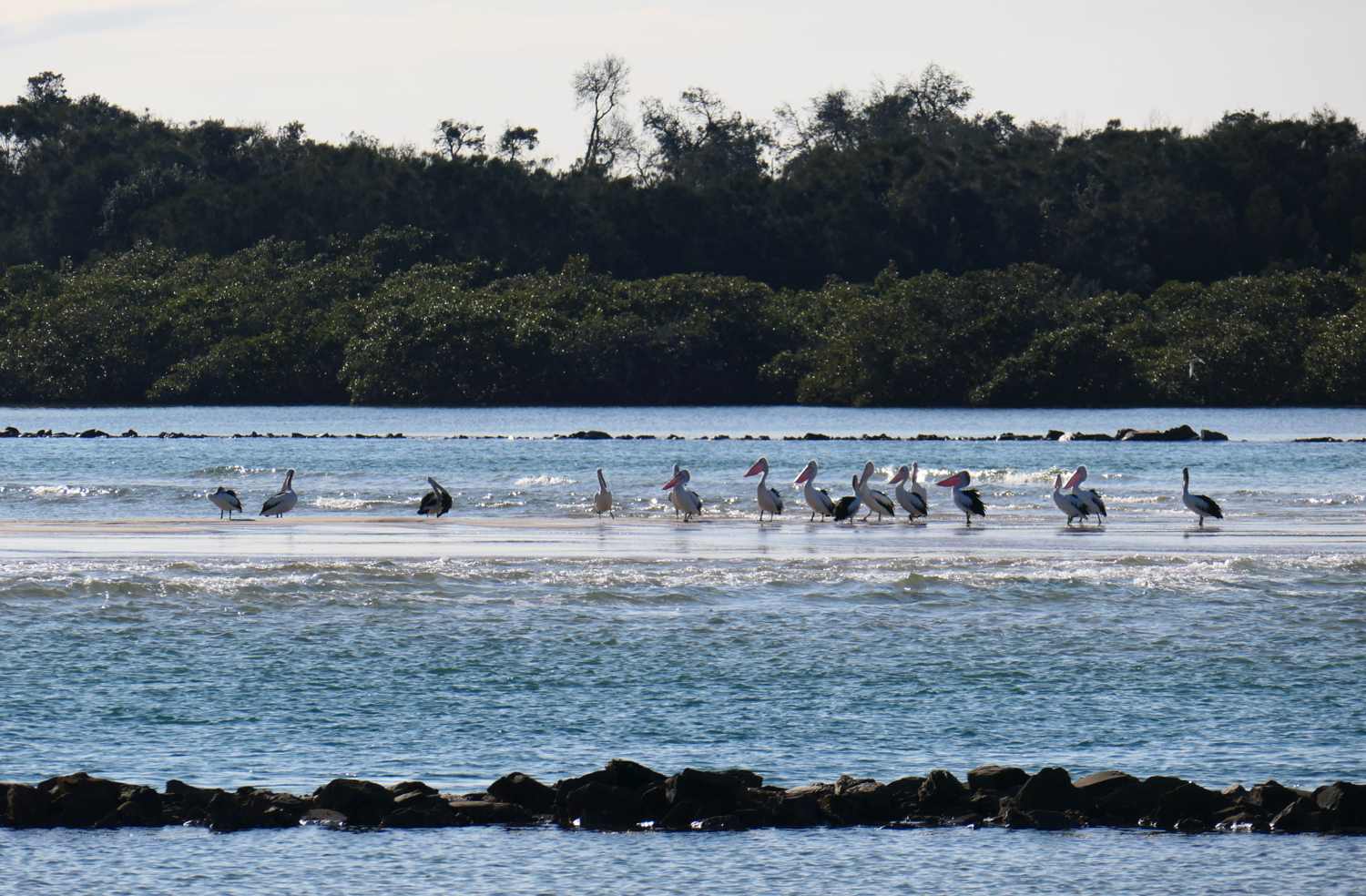 The pelicans are soon washed away, their spit emptied by incoming waves sliding in. 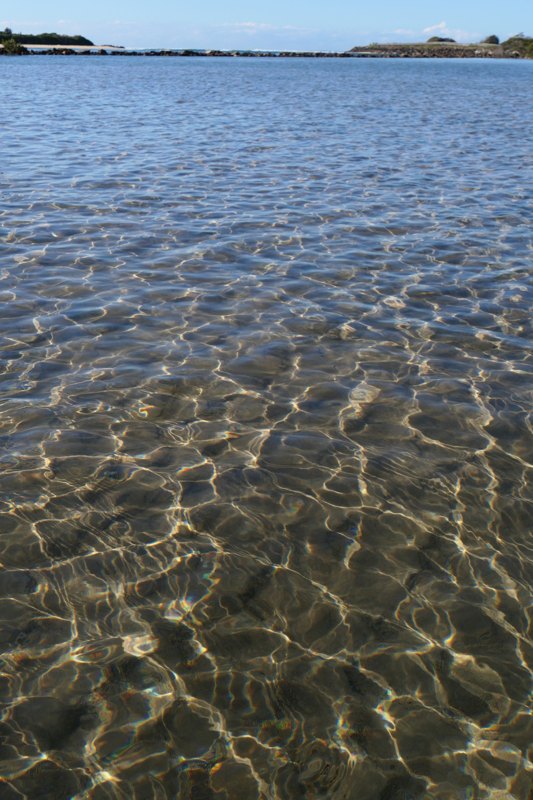 Too slow for a huge back crab that scrabbles down the lowest step, legs in a scurry to flip underneath and wait hidden upside down. 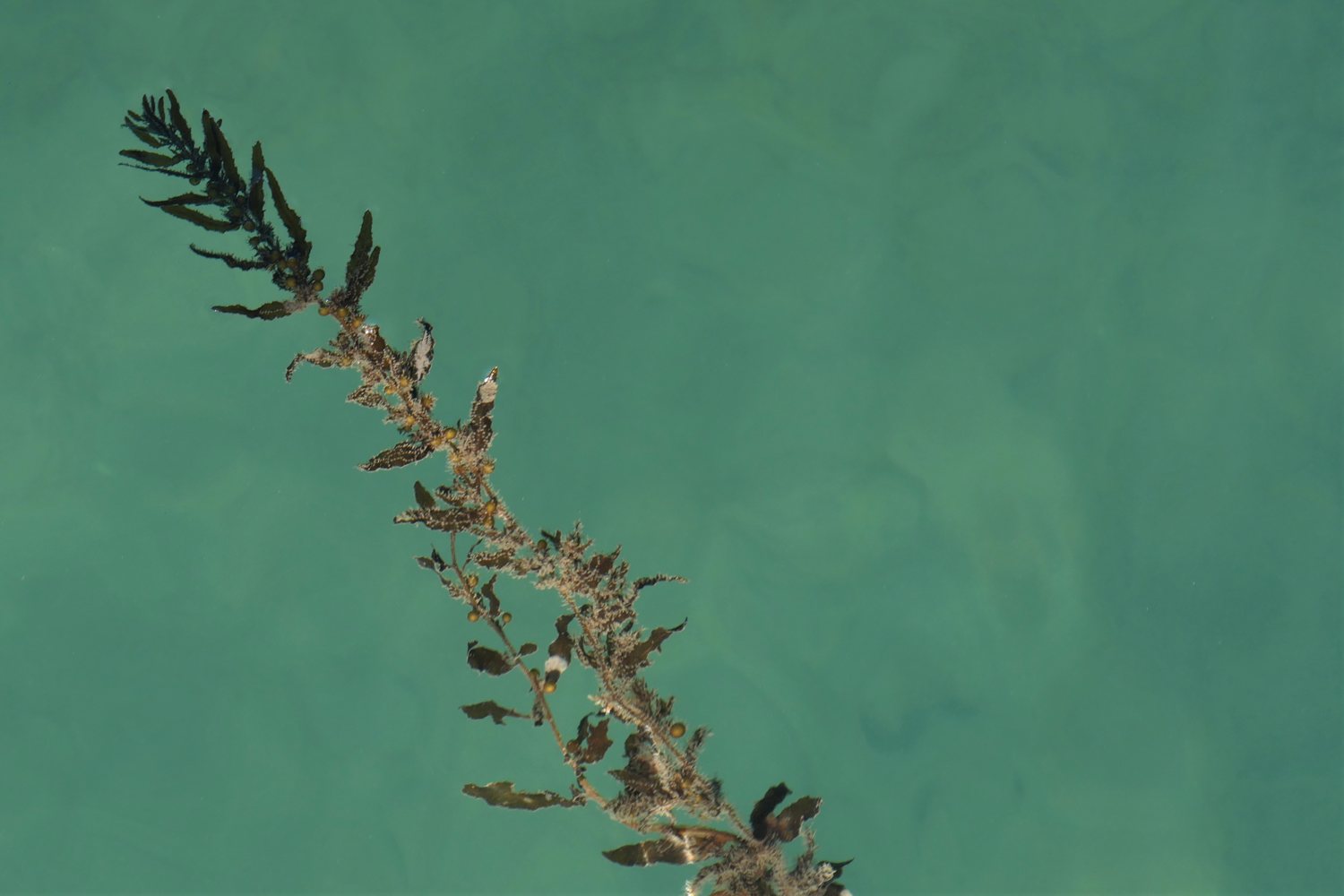 A passing family says there’s a large stingray further back. Which side? I ask. I had been looking the other way, to Nunguu Mirral. I rush back, track down to the new pontoon for a shoal of shadows, mullet. Weed strings into the light. 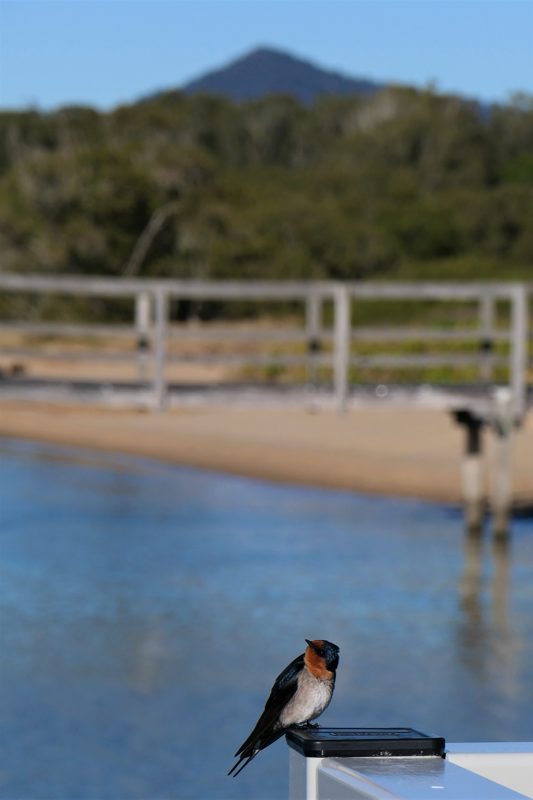 We admire Welcome Swallows for their fast sweeping flight, jet fighters of the air, energetic acrobatics and speedy manoeuvres with elegance, for being, as Ted Hughes put it, ‘whiplash swimmer, a fish of the air’. We don’t think of them as perching songsters, but this individual sang for several minutes with a variety of squeaks, clicks, whistles, cheeps, peeps, tweets and alto twittering, and laughing trills.

Sang for me (I saw no other sentient beings close by.

A Magpie swoops on a Norfolk Pine, starting to sing immediately its feet land.

The doctor is pleased with my blood pressure and the blood test, says my blood is perfect. ‘So I am an Olympic athlete bloodwise, it’s just everything else’, I say.

Wyn is out Koala spotting with NPWS before tomorrow’s burn. Sends me a photo of Lil to show how difficult it was. 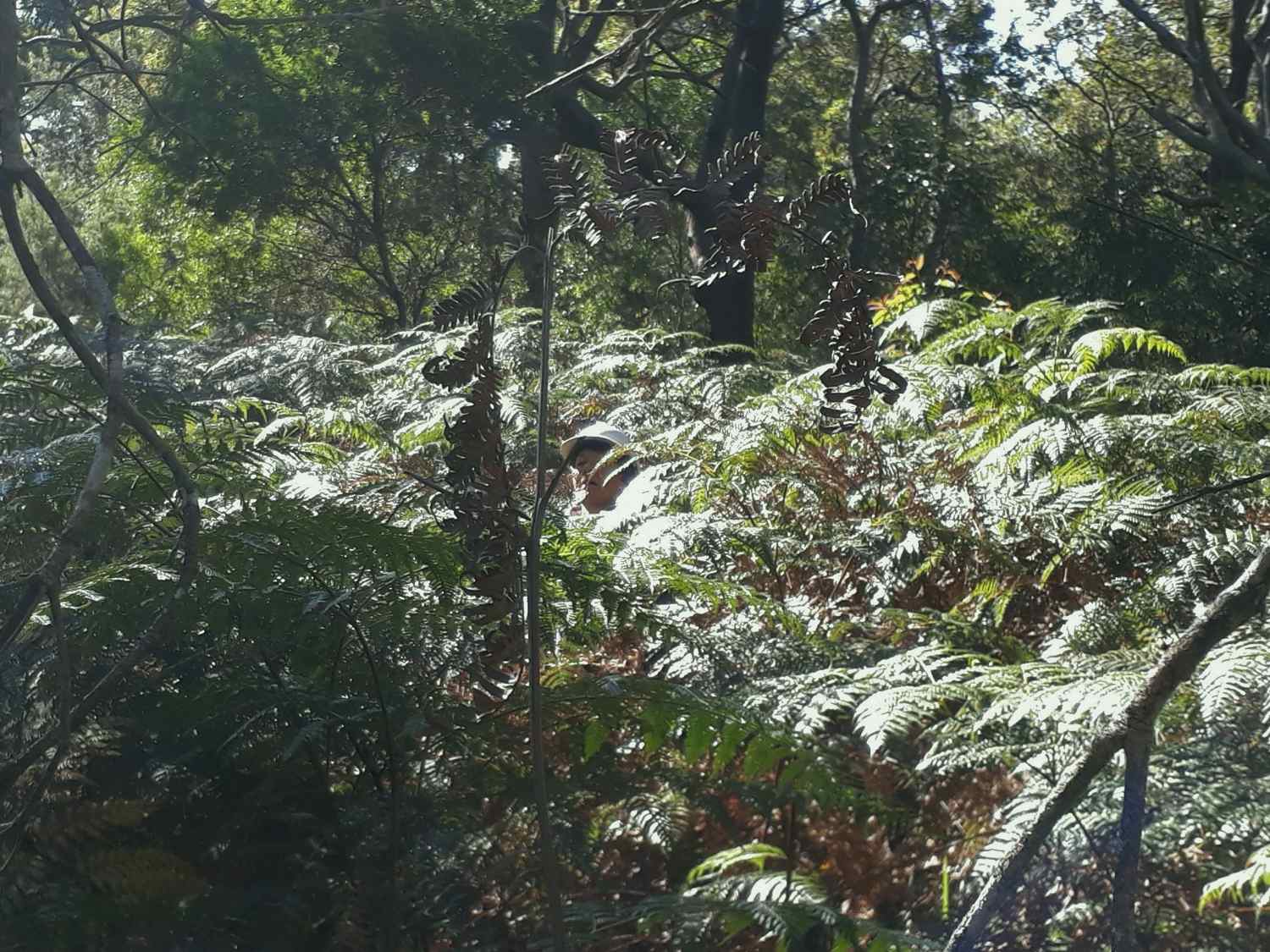 I am on deck, hear a growling, a plane bisects the cloudless sky and passes exactly overhead. This can’t be chance, as if so much depends on our green wheel barrow out of sight, directly below me,

I catch up with the Rangers Lindy and Simon. He told me he had visited the local very upset and very angry, about her favourite walk being burnt, worried about the goannas and other creatures. She had hassled Georgie to do something immediately, as soon as she heard. I said she should to pick her fights. NPWS are understaffed as it is.

To the Independent Planning Commission

Please read my submission objecting to the Narrabri Gas Project.

How much do we care about the future of a healthy environment for our children and their children. In just over 200 years we have decimated natural environments throughout this State.

We are being so destructive due to short term thinking and a voracious appetite for profit. Nearly all of the gas produced in eastern Australia is exported. The project will pump 1.5 gigalitres of water each year from the Great Artesian Basin, and release 94.2 million tonnes of potent climate pollution during mining and when the gas is finally burned. Pilliga and the surrounding areas have already suffered so much destruction of their habitats.

I have seen the Regent Honeyeater, I hope you have too. It is a majestic bird, its disappearance would be a tragedy and a stain on all of us living in this State

I am happy for my name and submission to be included on your website.
I look forward to hearing from you in regards to this submission.