We carry the responsibility for continuing to care for and look after the land upon which we live. Take a moment to connect with this site; consider that this place has an active memory. As you stand here, you are its most recent memory and part of a contemporary ceremony, an action and process marking the beginning of change. Tony Albert, Healing Land, Remembering Country, 2020

Freedom and Justice for all including the so called ‘non-life’. For it is within these moments that we shift perceptions and expand upon our values of respect. Ibrahim Mahama, No friend but the mountains, 2012-20

My work centres around ways in which humans are uprooted from their lands due to social, political and cultural pressures and change from the outside. . .  Once a population is uprooted, so too are their languages and histories rendered irrelevant . . . Anna Boghiguian, The Uprooted, 2020

A life in question will unfold tattoo parlour to the tote of this glass pipe the nation shall rise up in a hail of burn outs, black eyes and southern crosses. Warwick Thornton, Meth Kelly, 2020

My work revolves around notions of power and the mechanisms at play in contemporary society. One form of power remains that of control: control of information, control of bodies, control of territory and language. Mohamed Bourouissa, Brutal Family Roots, 2020

On the way to the station, not birds in the trees but phantoms. 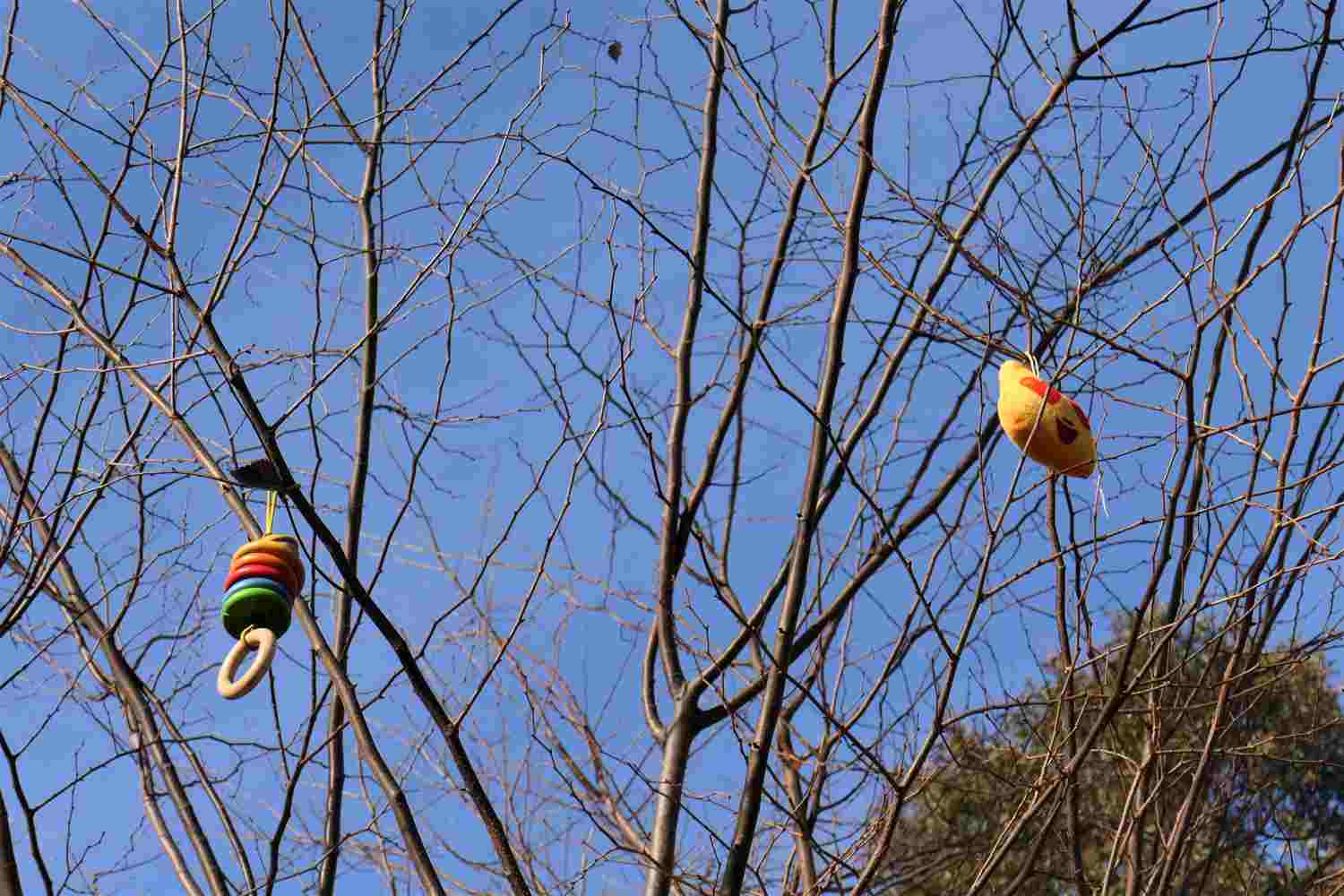 The canopy from the platform is metal and leaves, the views barbed. 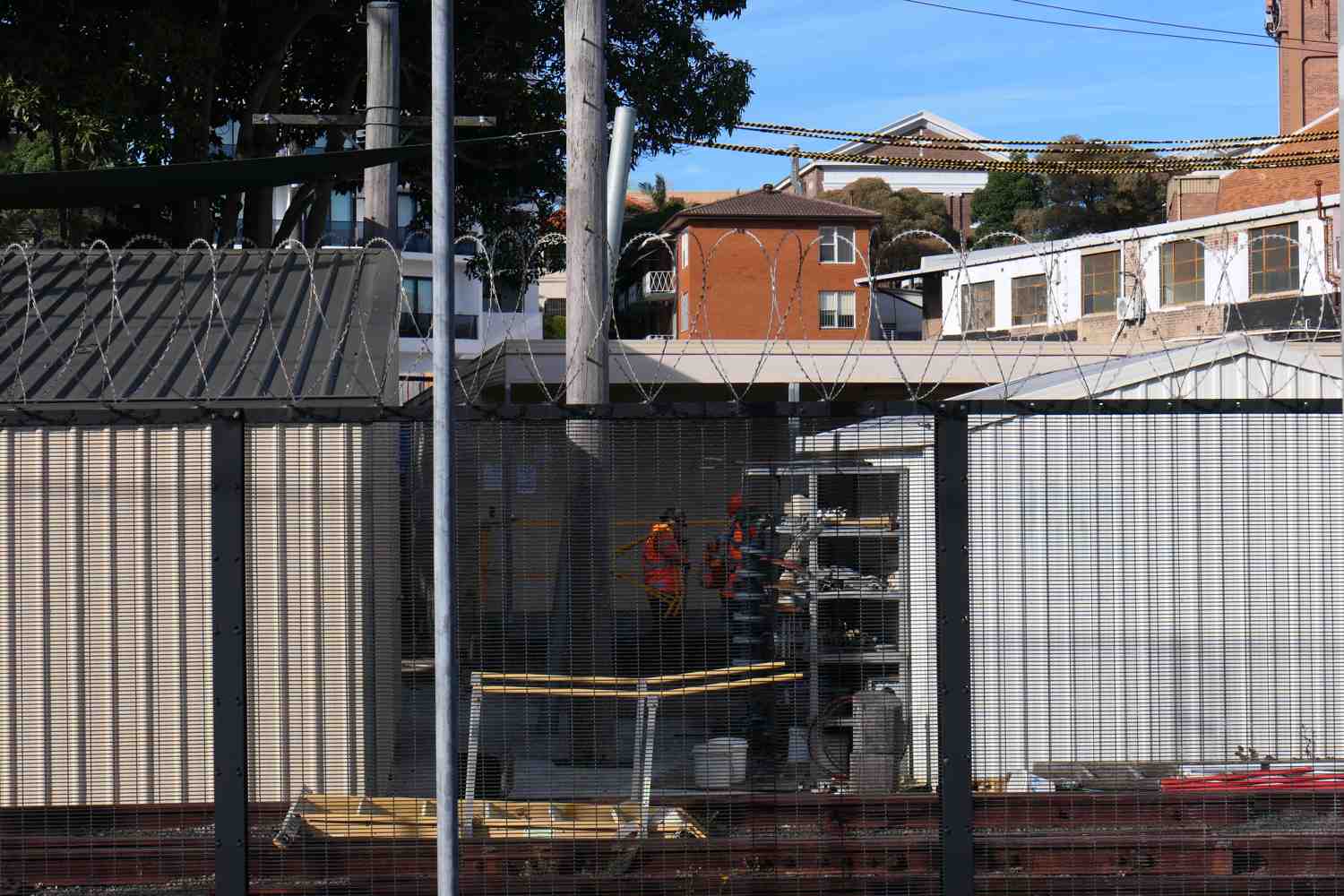 Circular Quay is quiet without the daily cruise ships. 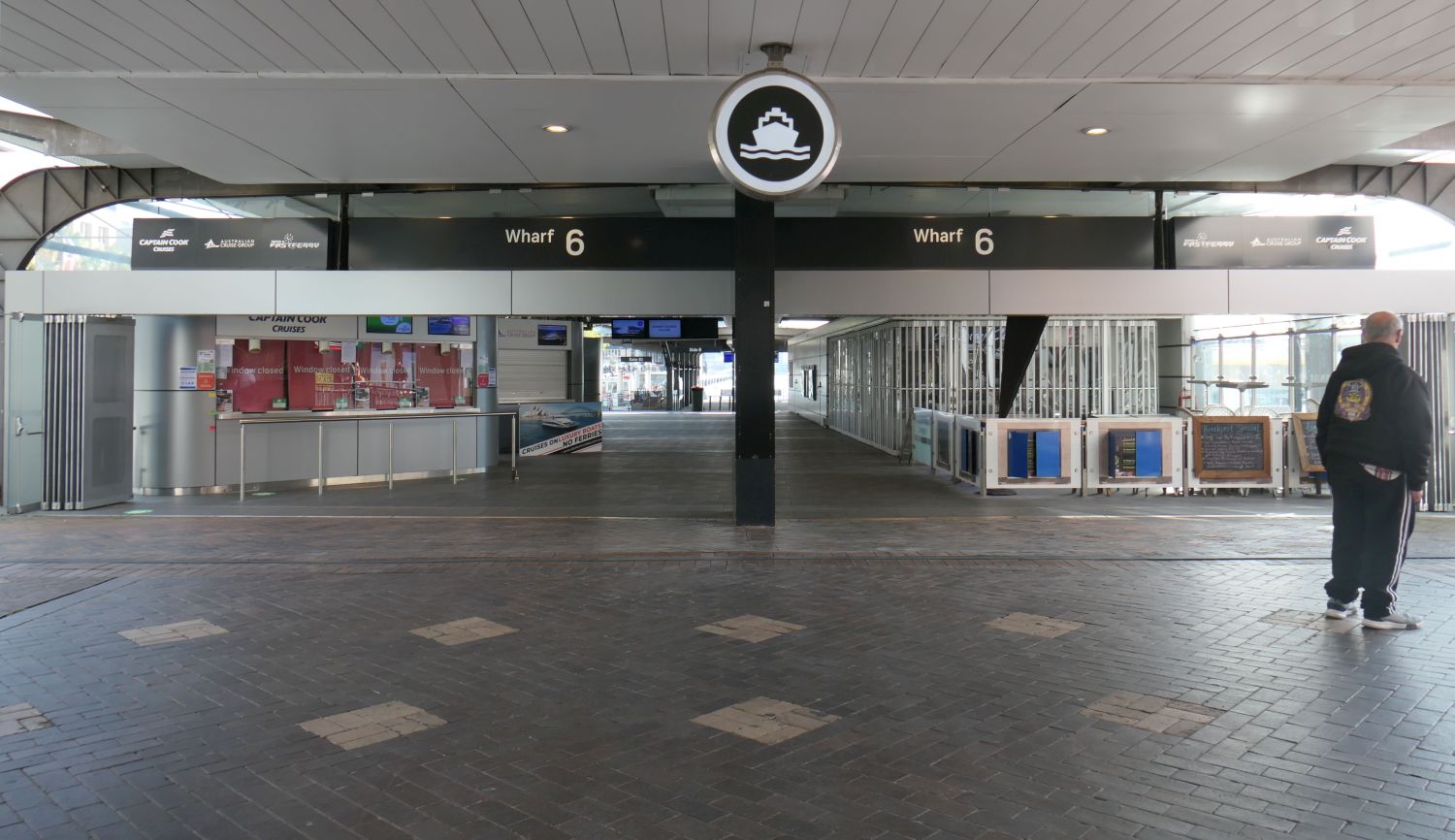 Most of the cafes are closed, Captain Cook dressed in the part is not out spruiking his cruises, ‘Discover the world’s most beautiful harbour and all it has to offer. Explore and experience the spectacular sights and attractions with us on one of our specialty cruises. Choose from luxury dining cruises, dinner cruises, lunch cruises, high tea cruises, catered sightseeing cruises . . . 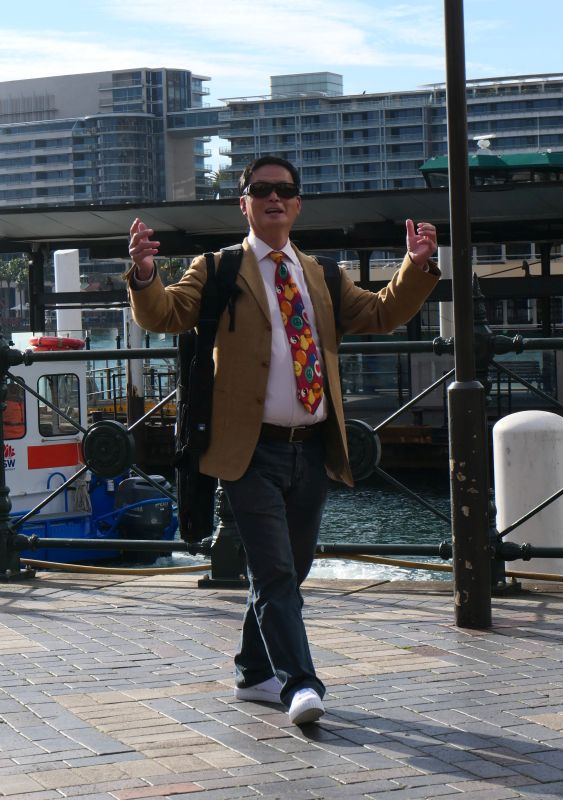 I hear a man singing, he dances towards me, I raise my camera and he performs for me, then dances off to talk to a faux policeman. 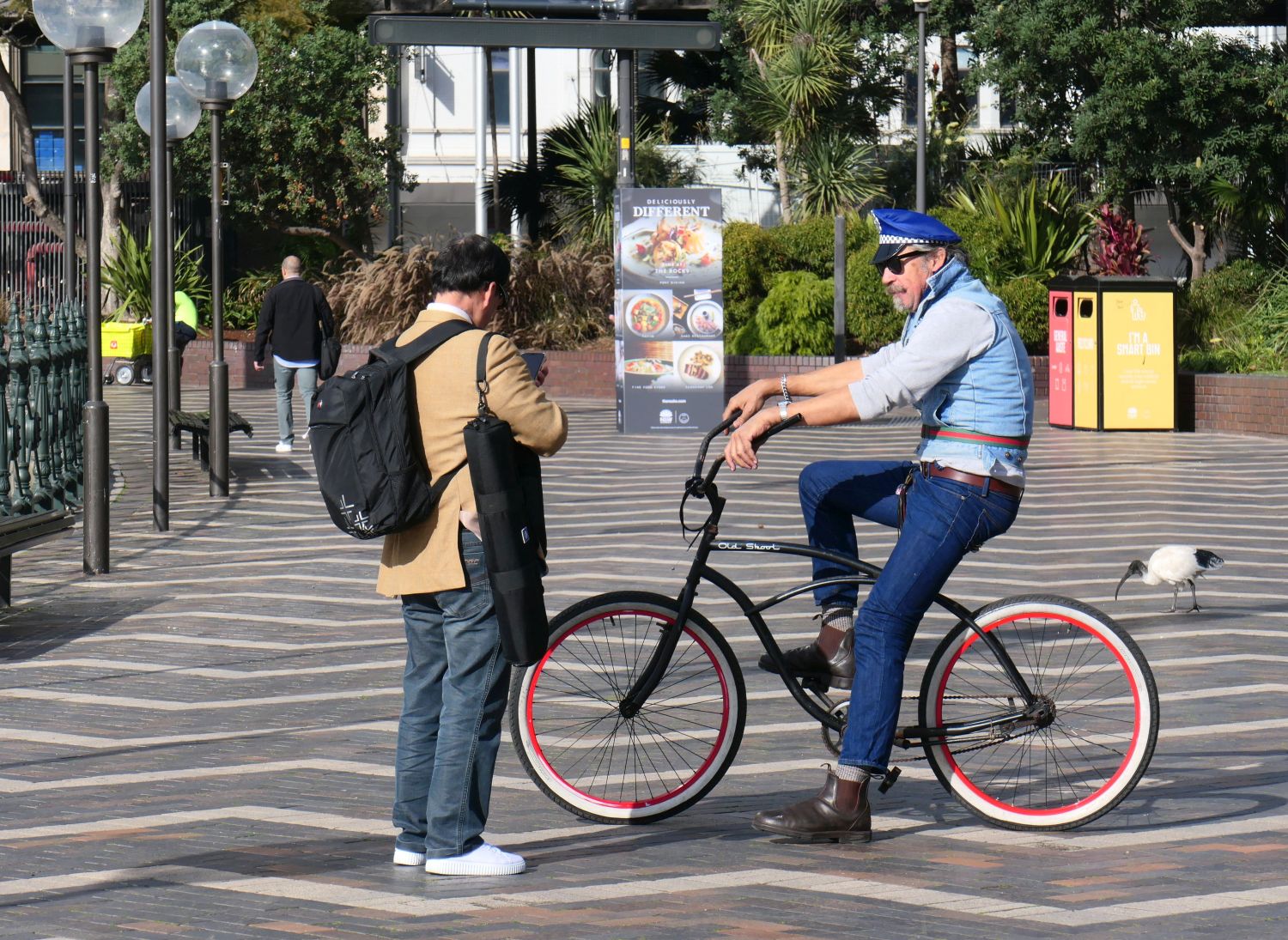 There’s an end of term feeling here without the tourist hordes, but construction can’t stop. 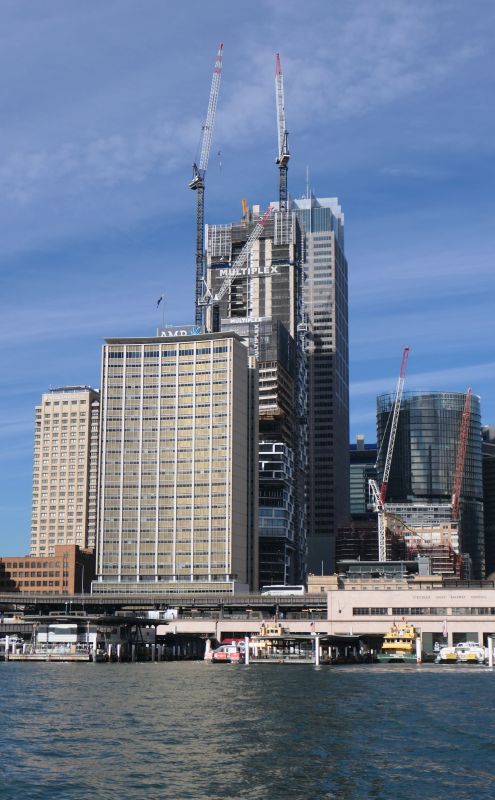 The ferry to Cockatoo Island has taped the outside seats, odd I thought since the virus doesn’t like sun and air. I lean out if the window, the air is fresh, lubricates my blood, I fill my lungs, the air feels, taste, wholesome.

An unexpected stop, not on the board,  Barangaroo a travesty of a build on a human scale, skips and small machines run up and down as smoothly as in TV spaceports. 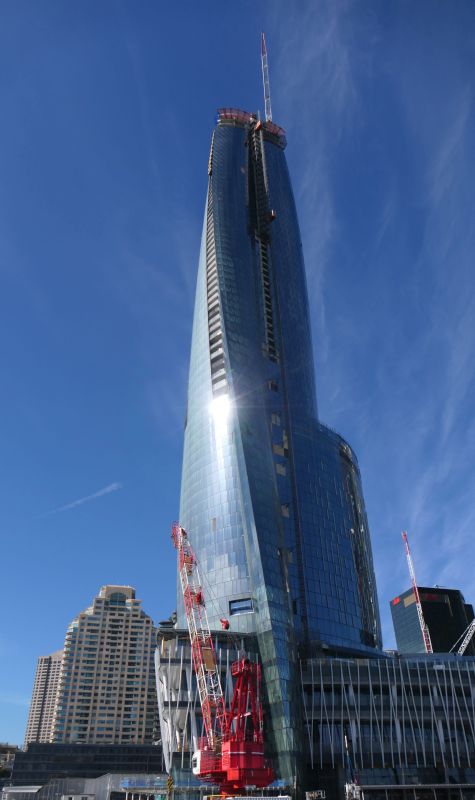 A community objection to the Crown Resorts tower at Barangaroo failed in the Land and Environment Court. 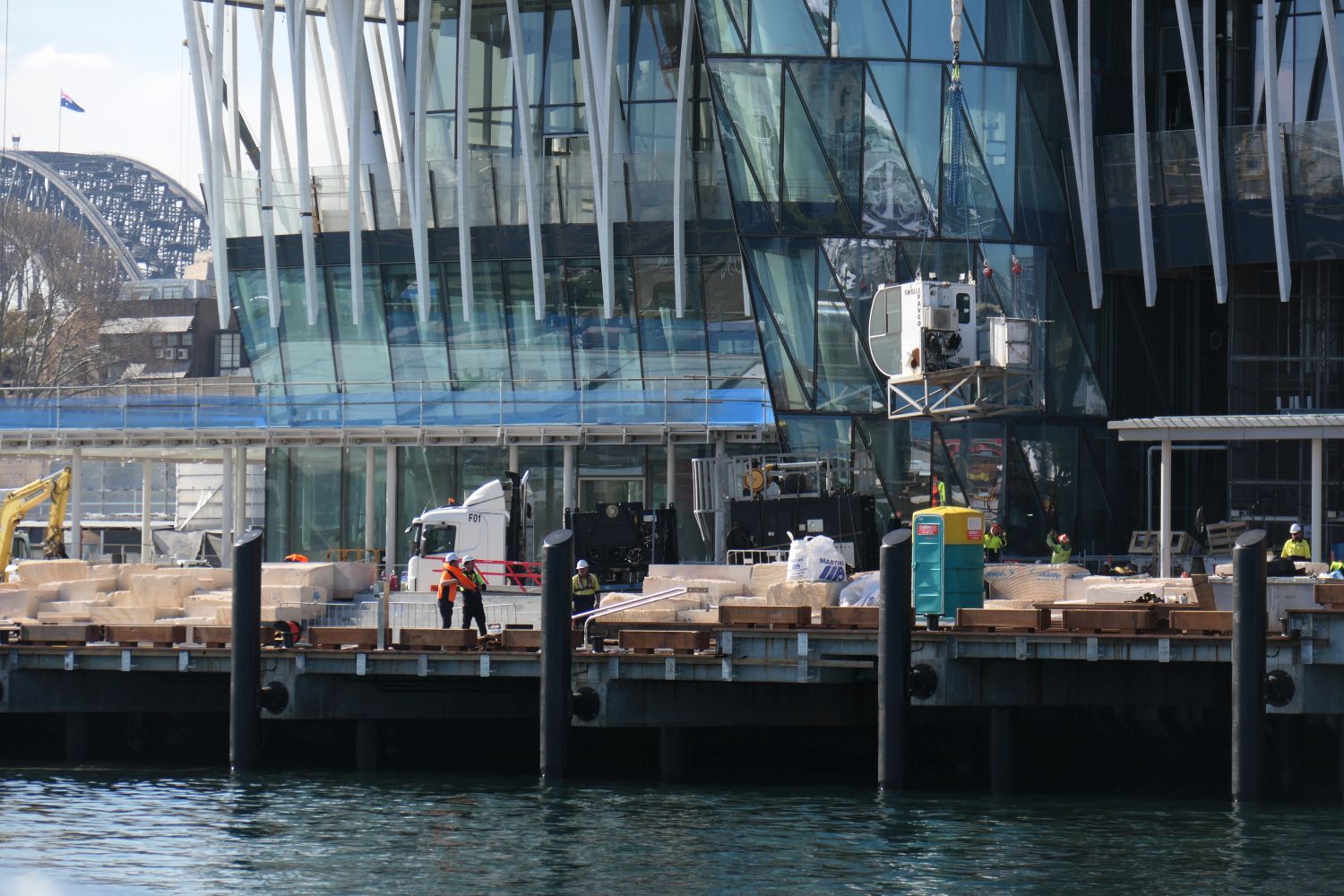 Then we passed some prime real estate at Birchgrove. 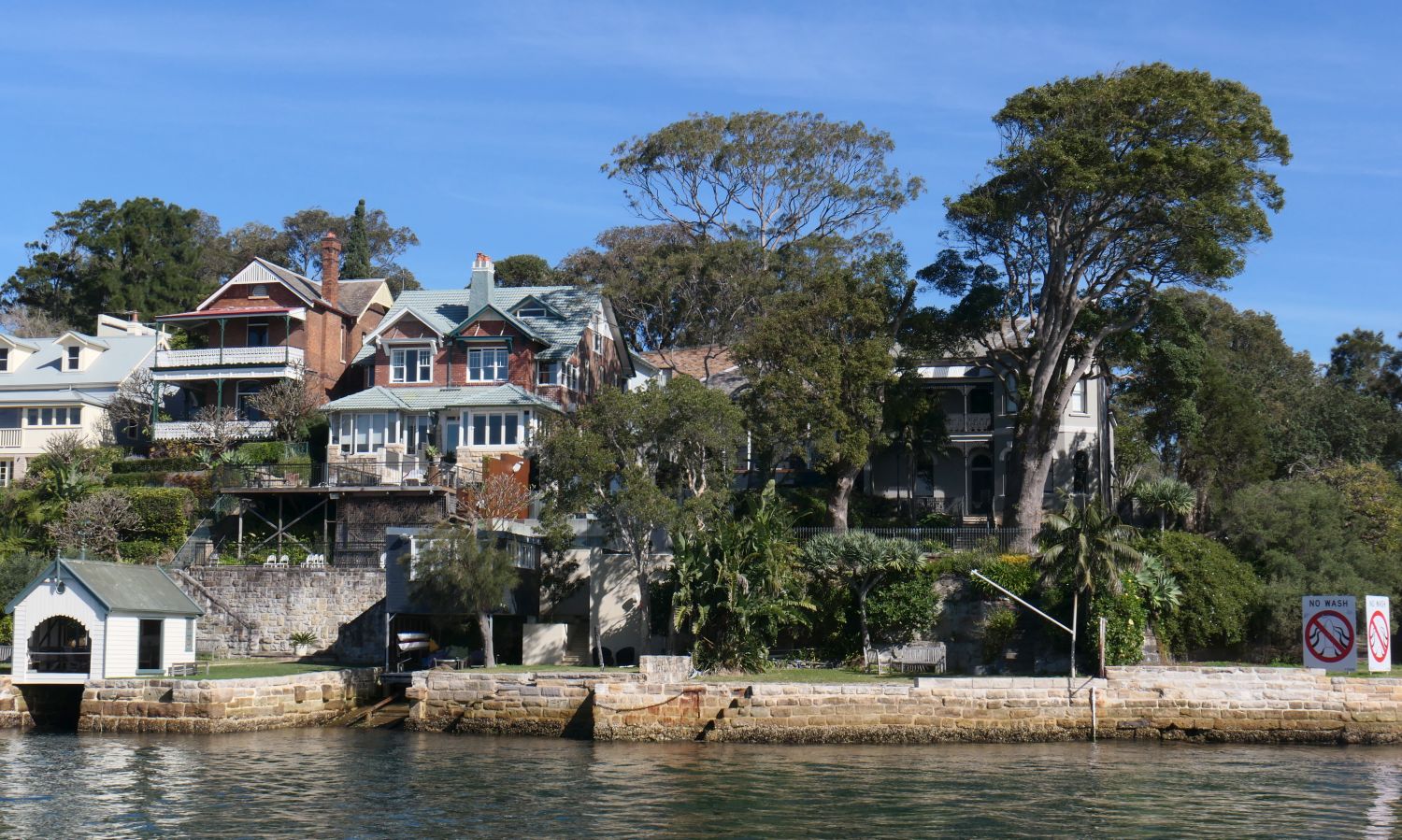 Arrival has a slogan, an extract from Melanie Mununggurr poem, ‘Portal to the Past’ written for her paternal grandmother, known as Momu. 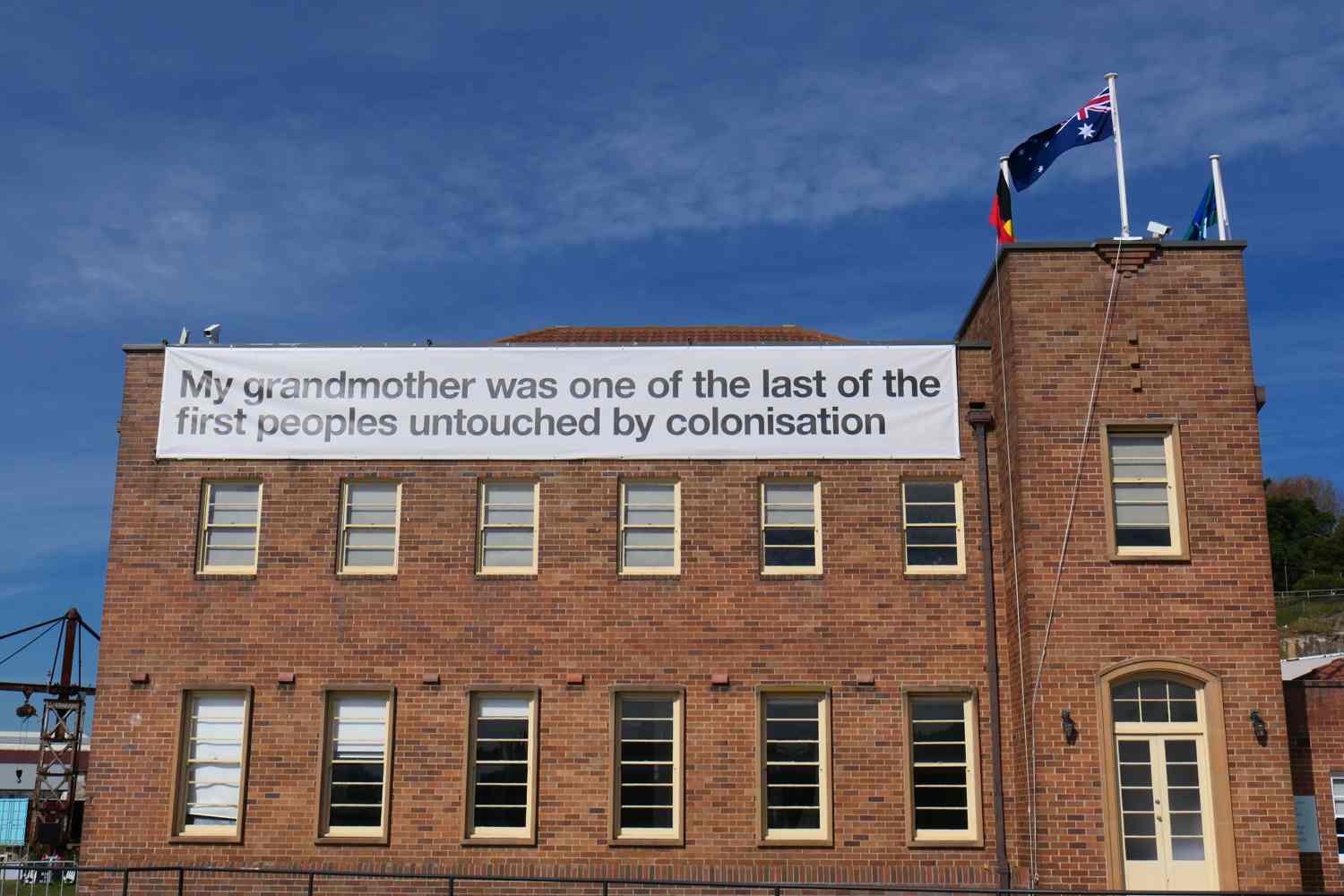 I head straight to the Dog Leg Tunnel. Last Biennale I got to I 2014 there was Callum Morton’s ‘The Other Side’, a ghost train ride, a great idea but boring. This this time it’s ‘Into All That Is Here With The Two Cockatoo Too’. 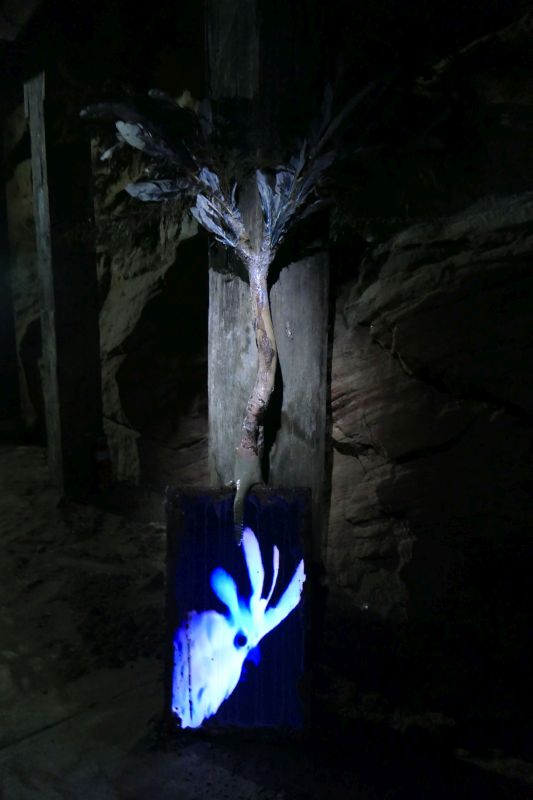 A guide with a torch leads you into the darkness with installations and video works popping up along the way. Fun but idea what her subconscious was up to. Not surprising since Laure Prouvost, the French artist ‘Lives and works in London, United Kingdom; Antwerp, Belgium; and a caravan in the Croatian desert.’ I have been to Croatia, don’t recall a desert. 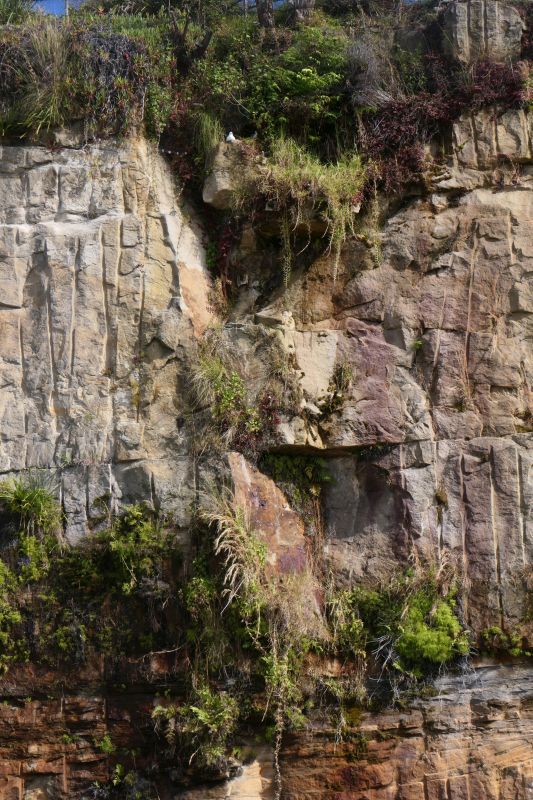 Then it’s a climb to the top, ducking to avoid seagull attacks, they are nesting everywhere. 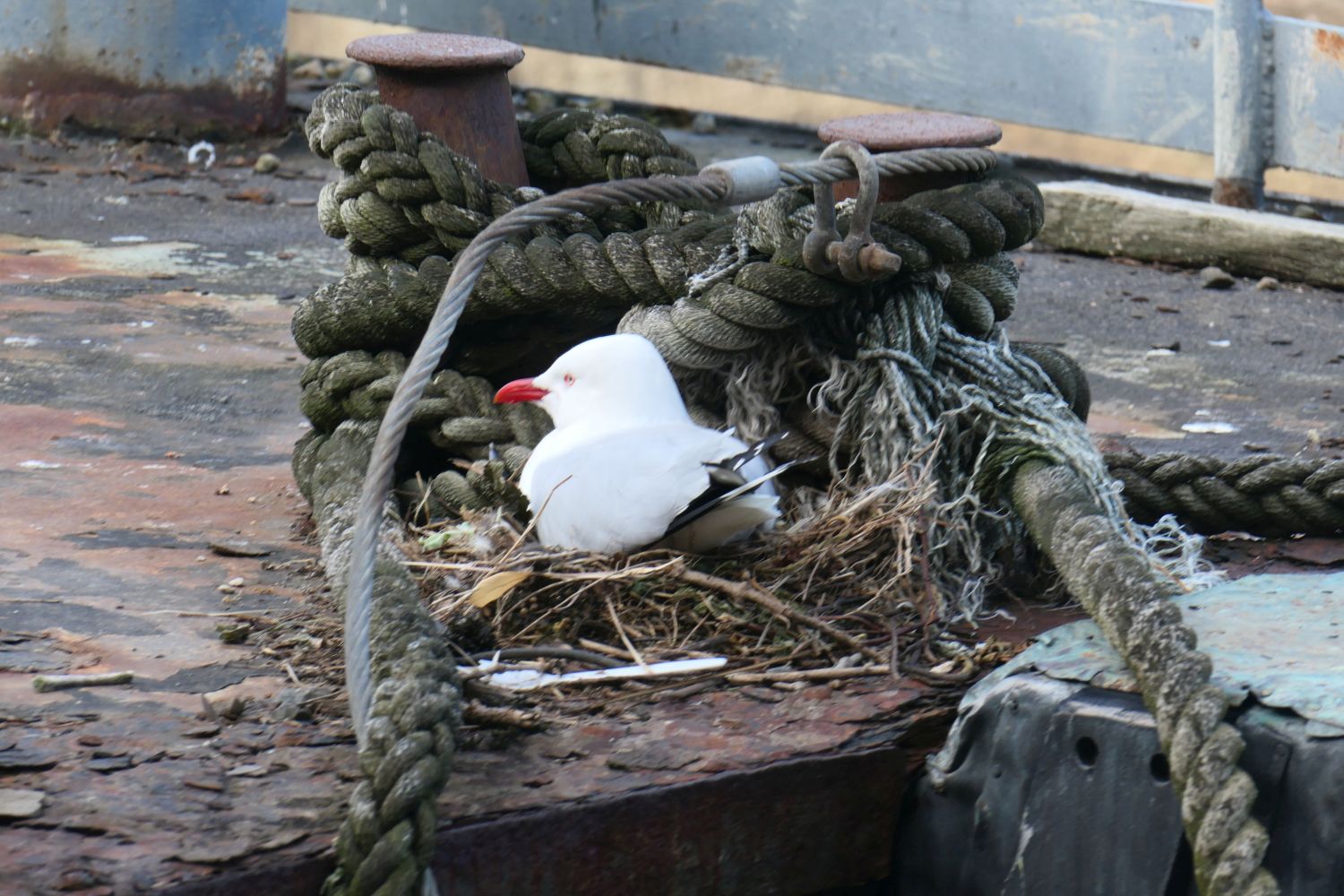 In the large room there was a lively, but ephemeral,  conference in the 2008 Biennale with Michael Taussig finding that art, community and ethnography are terms that are too opaque. What does art do better than ethnography? Talking of field work he noted that a stranger can understand better what’s going on in many respects, and yet is also completely ignorant – I feel that applies to my experience interacting with many of these art works. 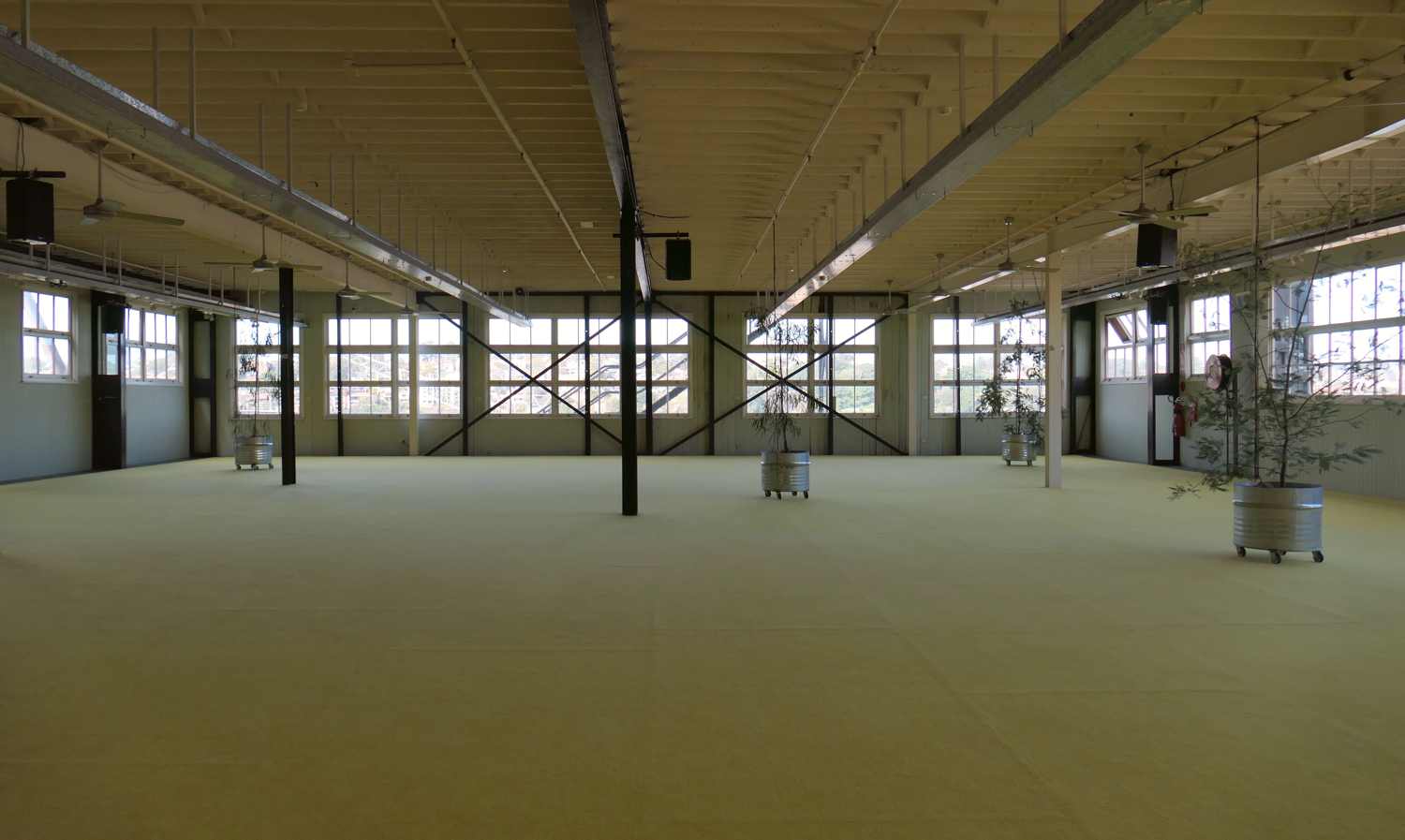 There is an installation of acacia trees with recorded voices Mohamed Bourouissa’s, Brutal Family Roots, is an oars of calm, outside its seagull racketeering. The wattle links this Algerian artist to his childhood and. the dispersion and adaptation of plants as with language. The attendant asks me to take my shoes off and walk around the potted trees, she wanders off. I am alone, start tai chi walking trying to make sense of the chopped up sounds, ‘Forming connection between the dispersion and adaptation of plants like the Acacia and the passages of language’.[1]

Tony Albert invites you to gift a positive memory as part of his project ‘Healing Land, Remembering Country’ 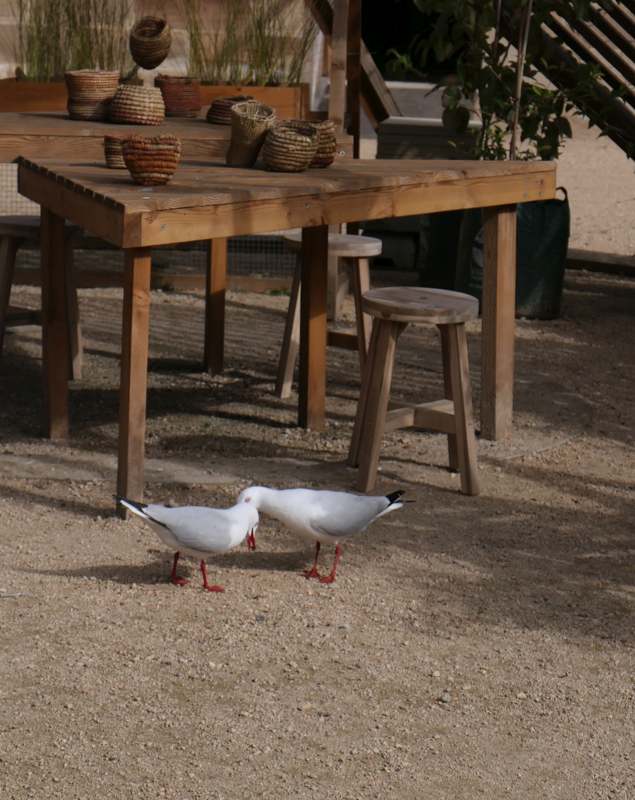 ‘A Silver Gull trying to nest beneath a table. Two Silver Gulls courting. The urge of life – of birds, animals, insects and plants to make the most of what we are creating, both the positive and the destructive.’

Once you have imparted your memory, it will be inscribed by the greenhouse gardeners on paper embedded with the seeds of local plants and placed in one of the baskets that has been carefully woven by the hands of many Aboriginal artists from all over Australia. In time, this paper will be buried at distributed at various sites and will sprout new life, reinstating endemic flora and gently healing the ecosystem. This project aims to rejuvenate and also heal the land.” 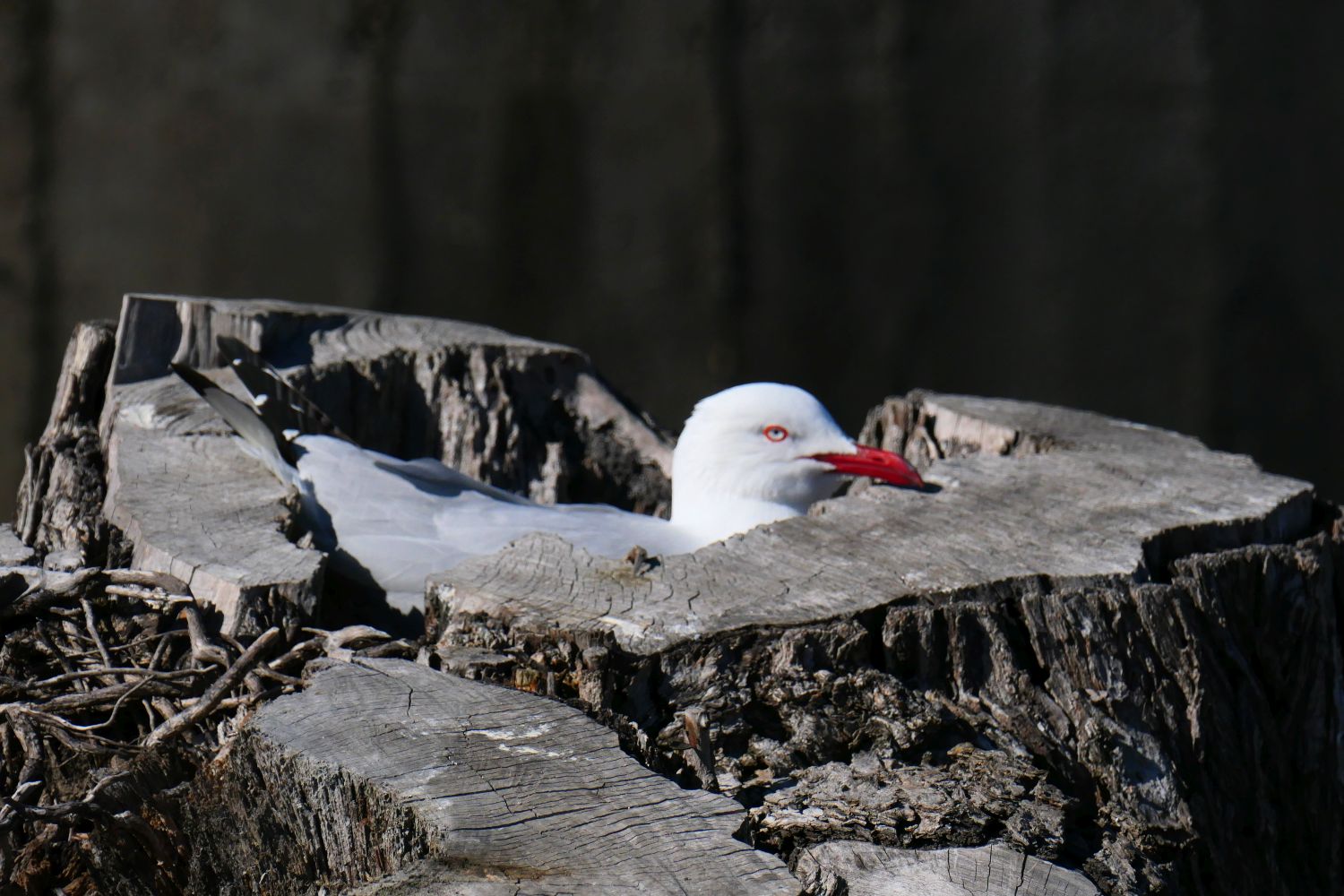 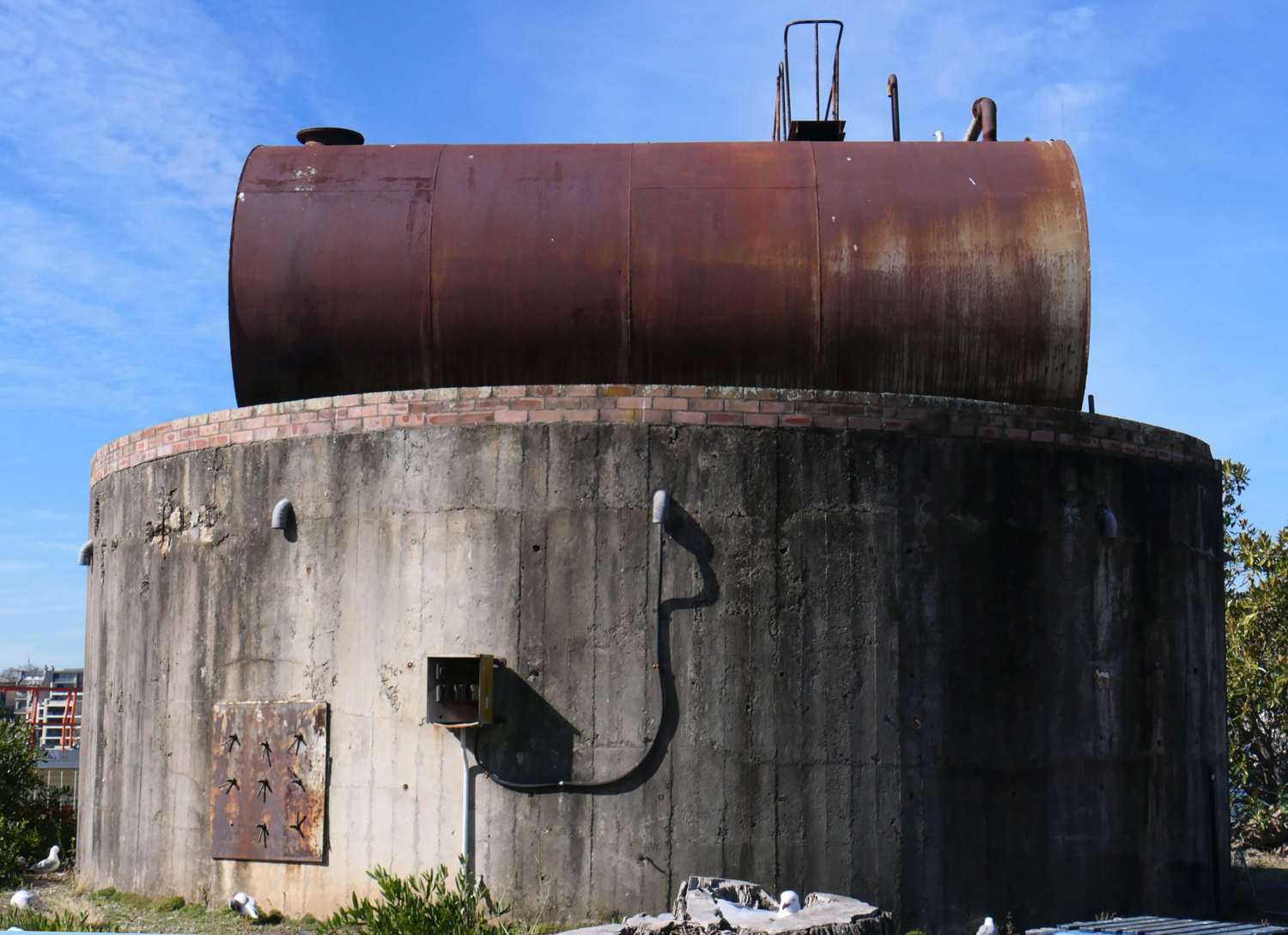 Anna Boghiguian is an Egyptian artist who has snagged a room I have never been in, opened up for the first time and it is a beauty. Any art would work here. Her cut out figures in the installation, ‘The Uprooted’, are in exile, refugees in a room packed with old technologies. 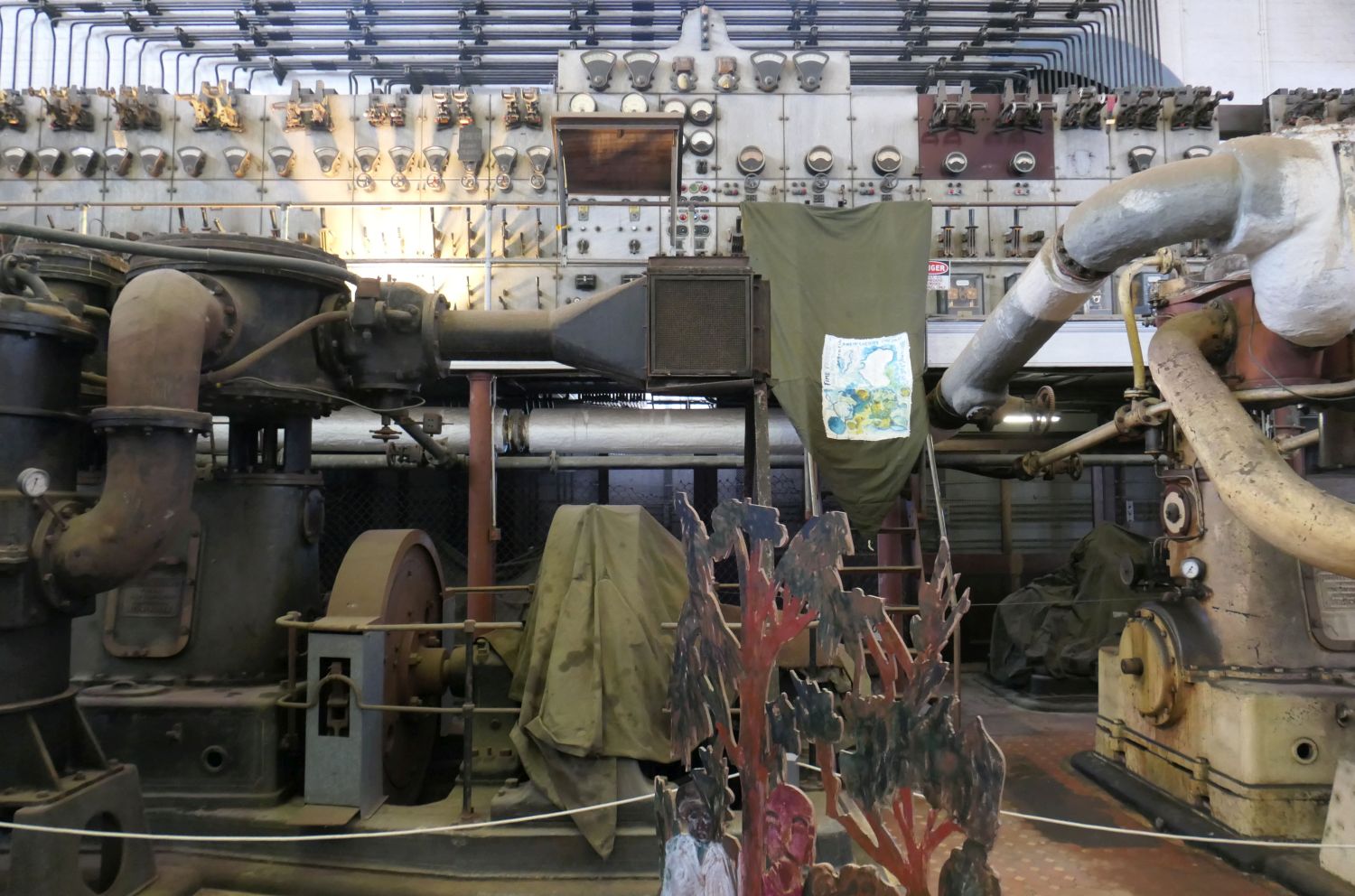 The first time I set foot on this haunted island was in 1984 for the launch of the last ship to be constructed on the island was HMAS Success. 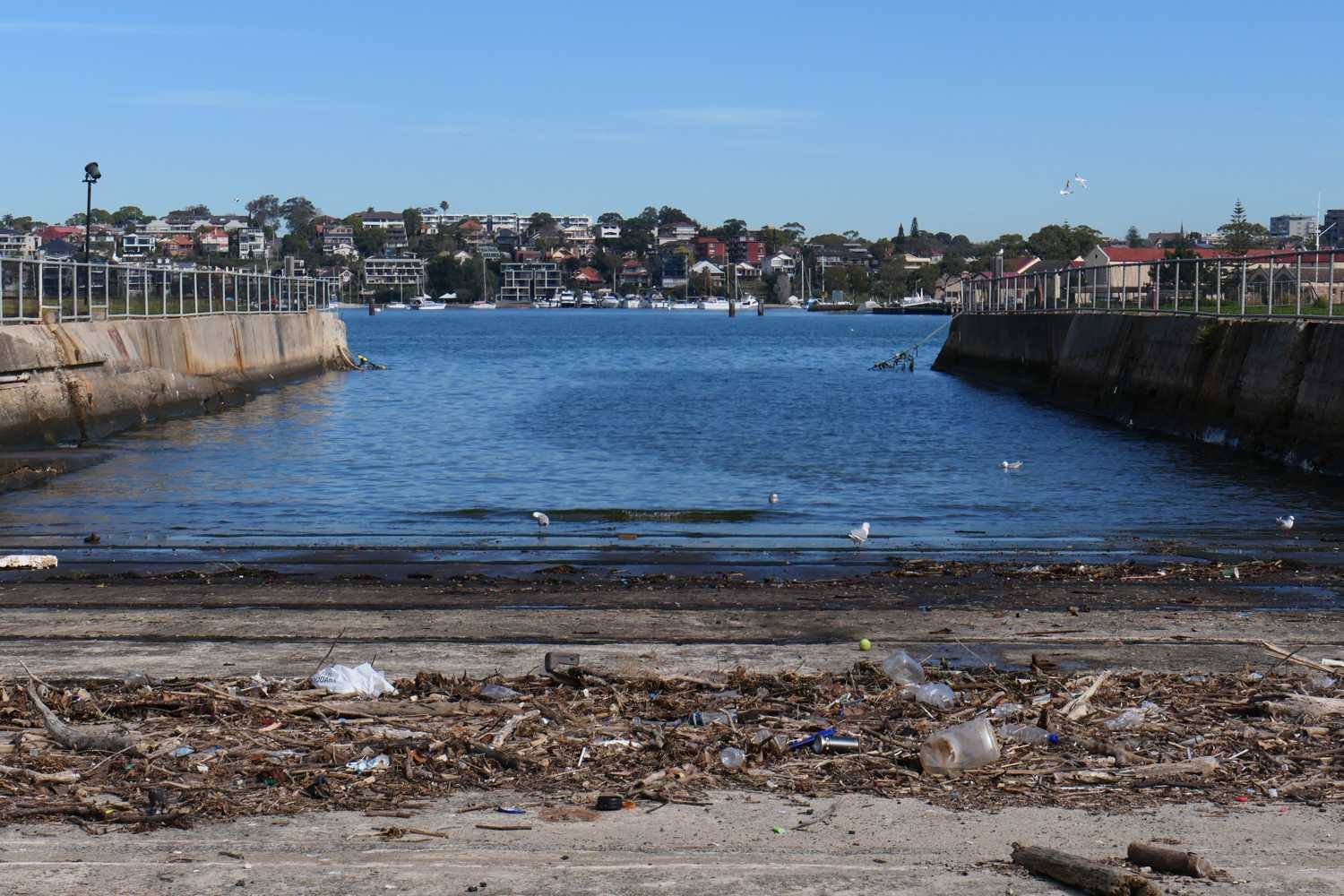 It was the largest naval vessel built in Australia, and I was surprised how moved I was by the ceremony as the men knocked away the blocks on the slipway and the vessel slid into the harbour with a huge surge of water. 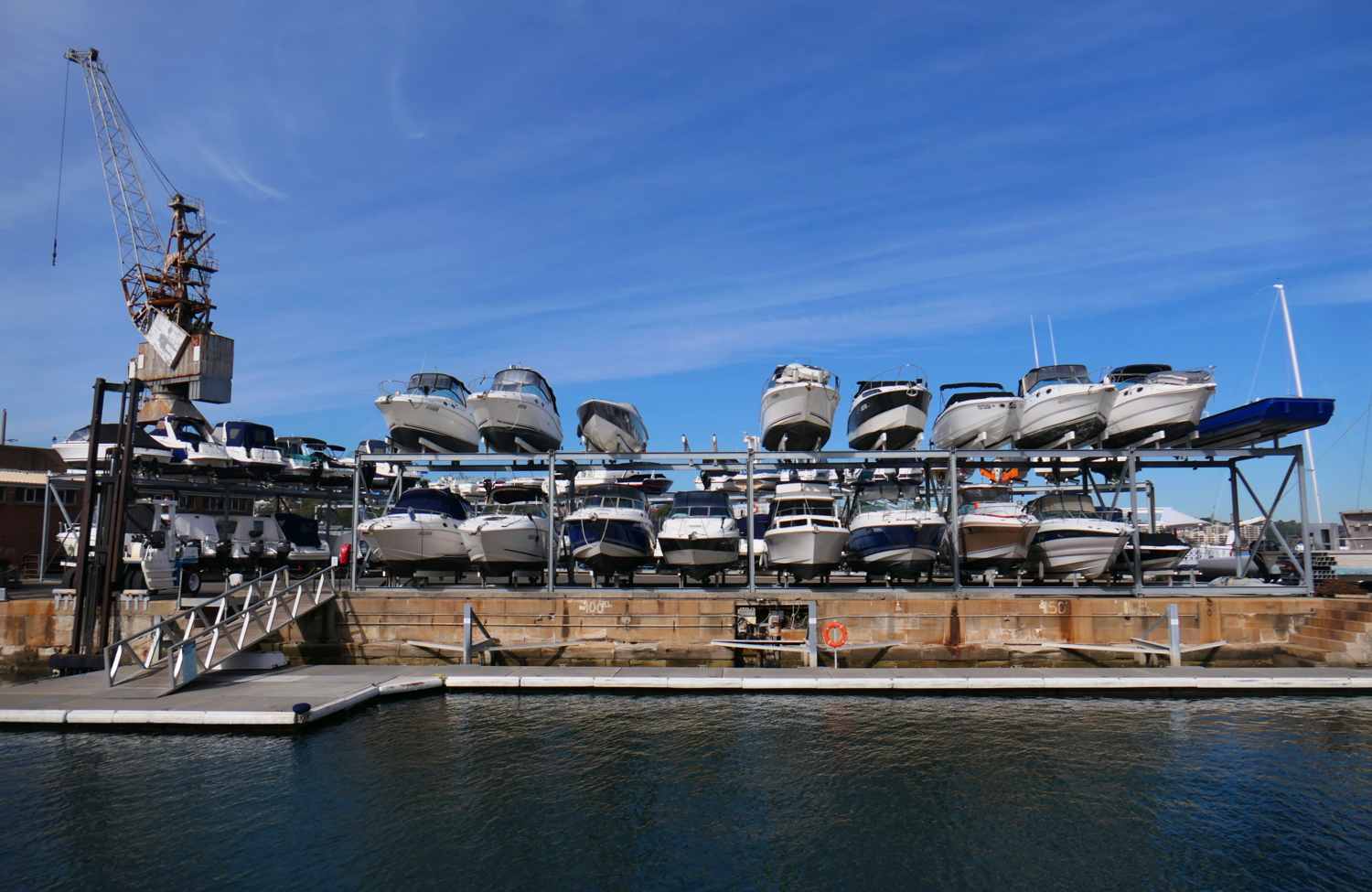 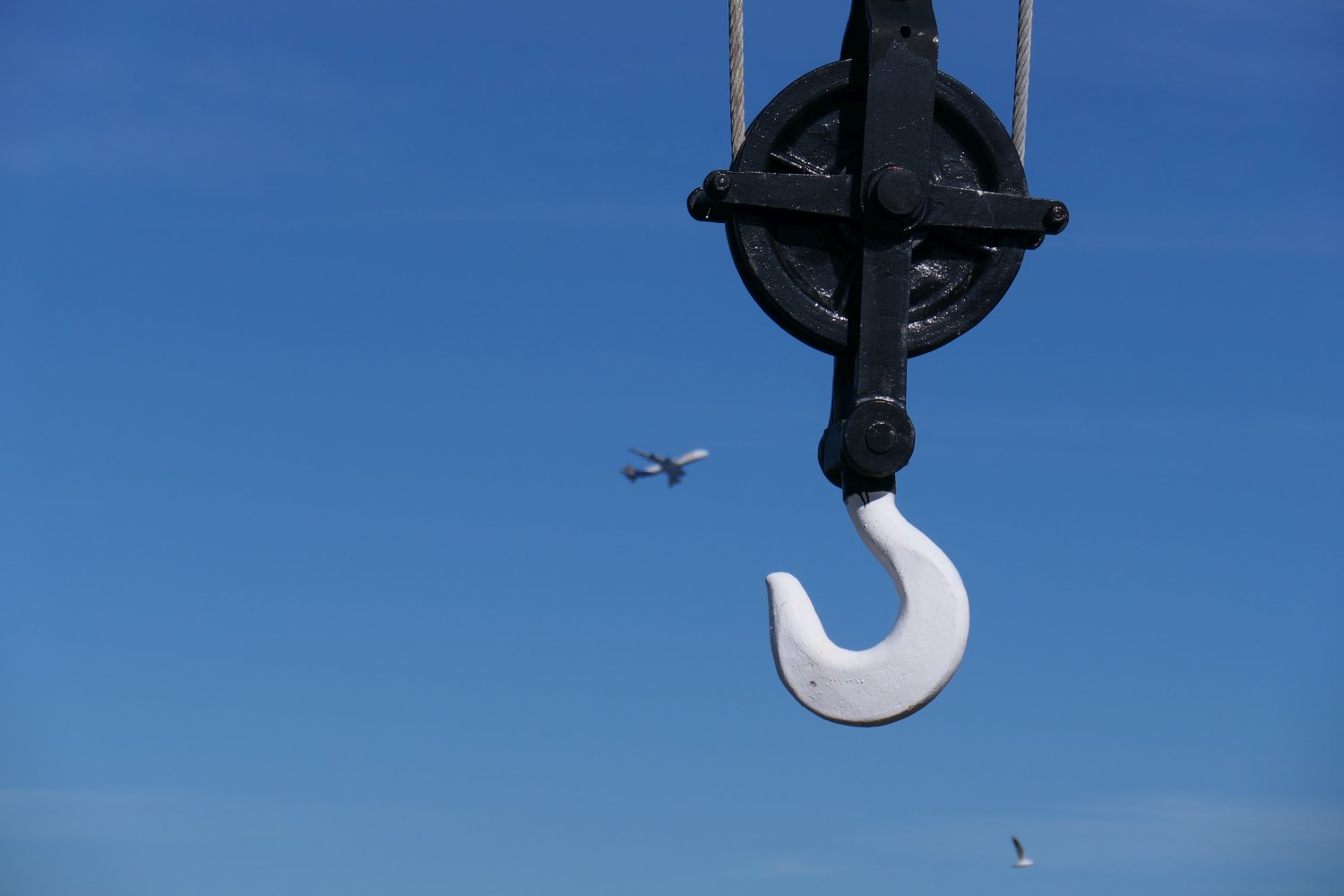 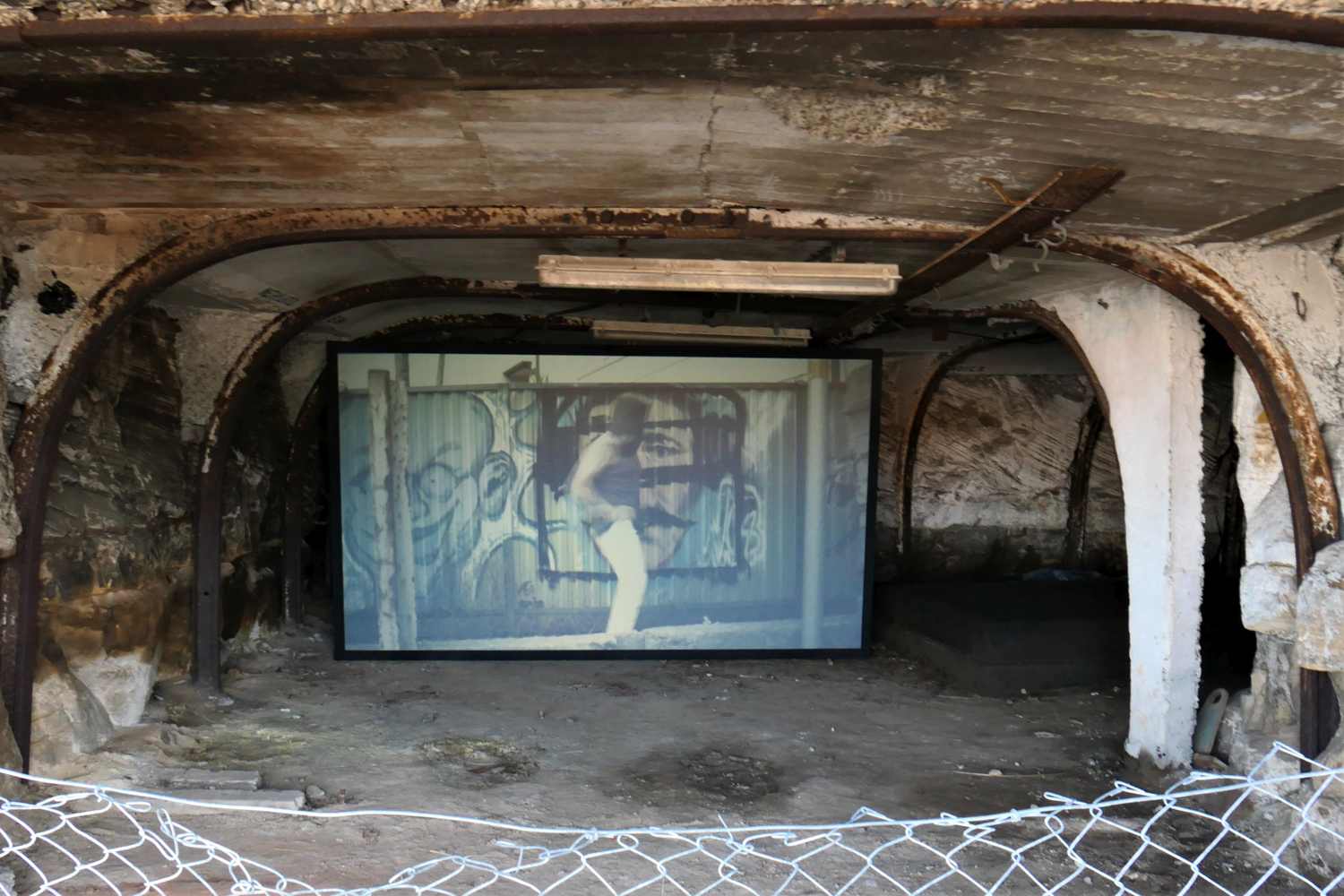 This is Warwick Thornton’s ‘Meth Kelly’.  His self directed documentary ‘The Beach’ 2020 about his time getting away from it all after years of “excess, neglect and self abuse”, on a remote piece of Kimberley Coasty was gloriously filmed. As was the drama Series 2 of Mystery Road (2020), directed by Warwick Thornton and Wayne Blair, about drug smuggling in an Aboriginal community in northern WA. One of the most beautifully shot works I have seen. 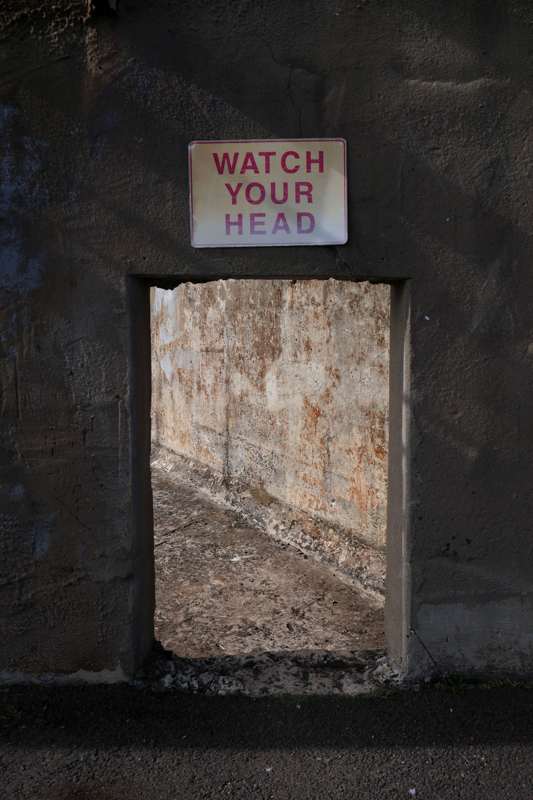 A full moon is setting. 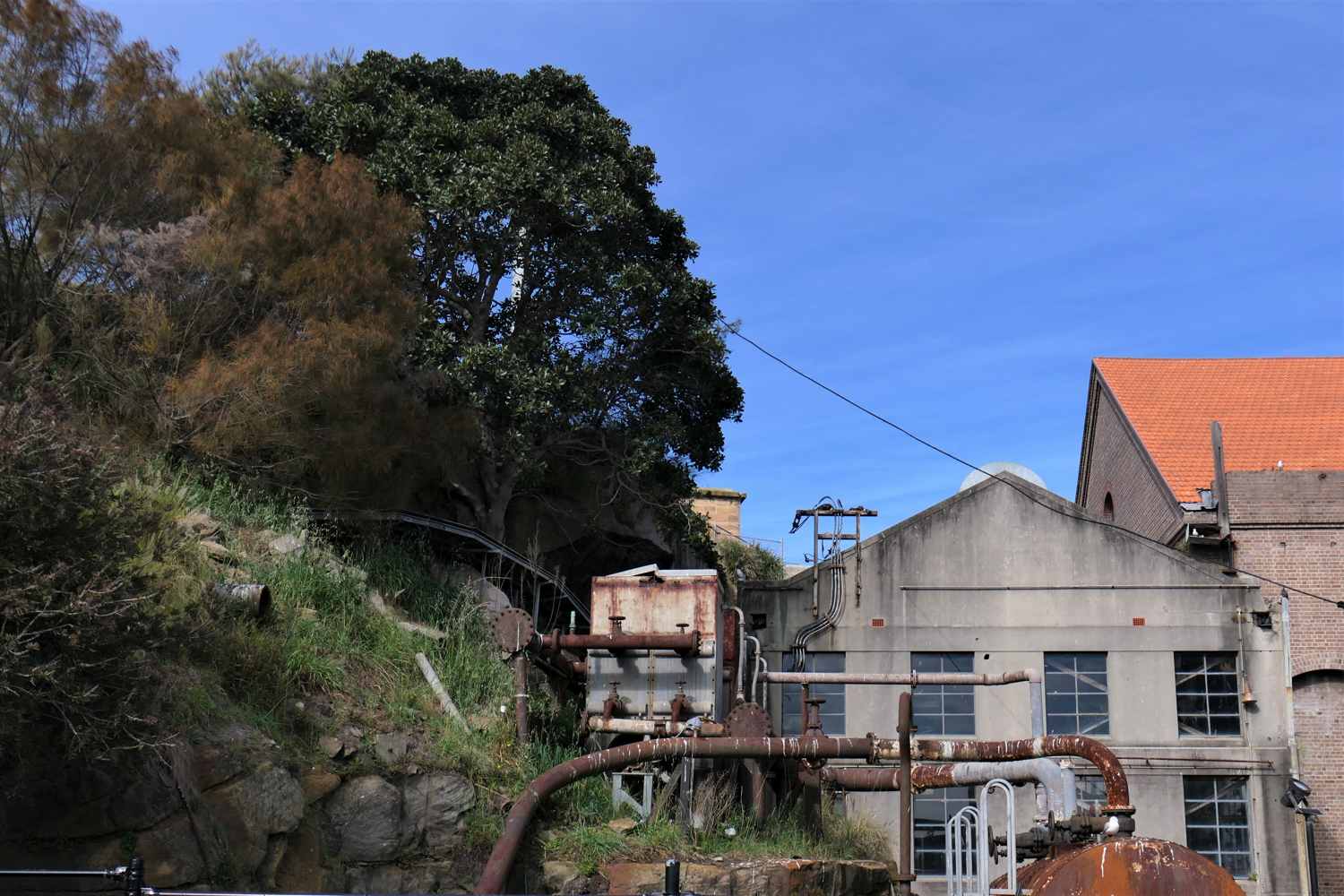 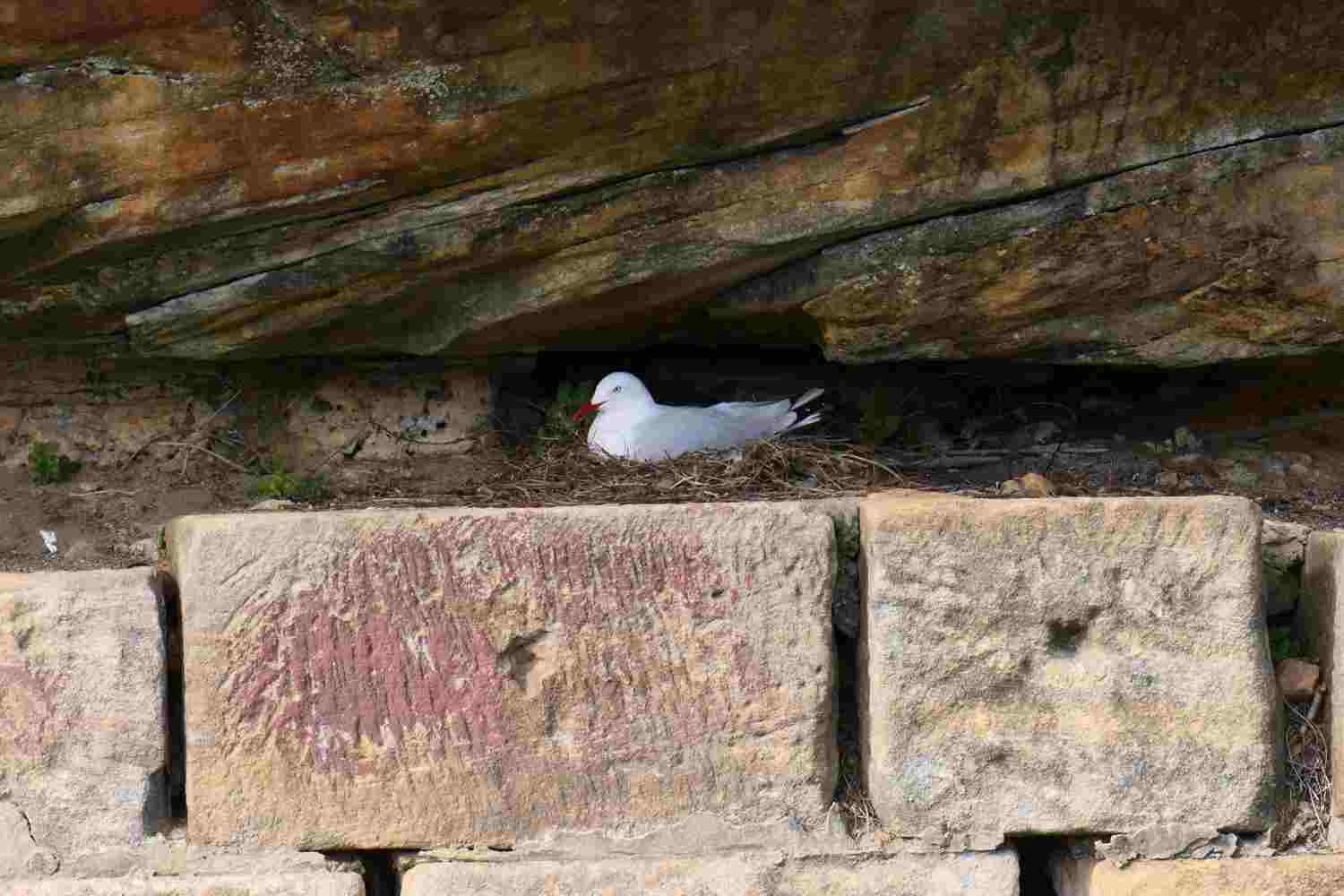 The vast Turbine Hall is wallpapered with jute sacks in Ibrahim Mahama’s No friend but the mountains 2012-20.

It’s a quilt of labour that he hopes will reference the labour and sweat of this island, once a prison and then a shipyard. 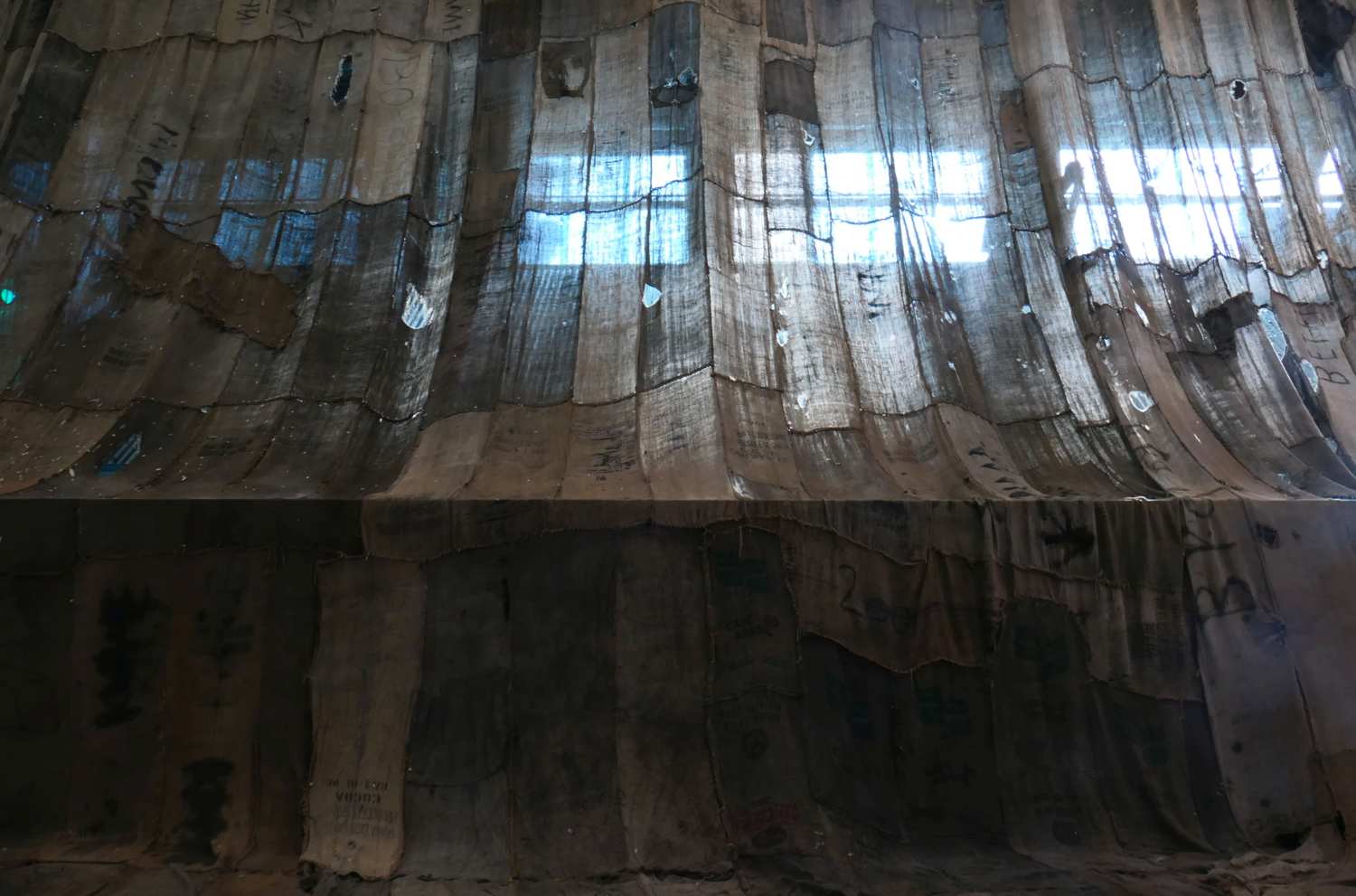 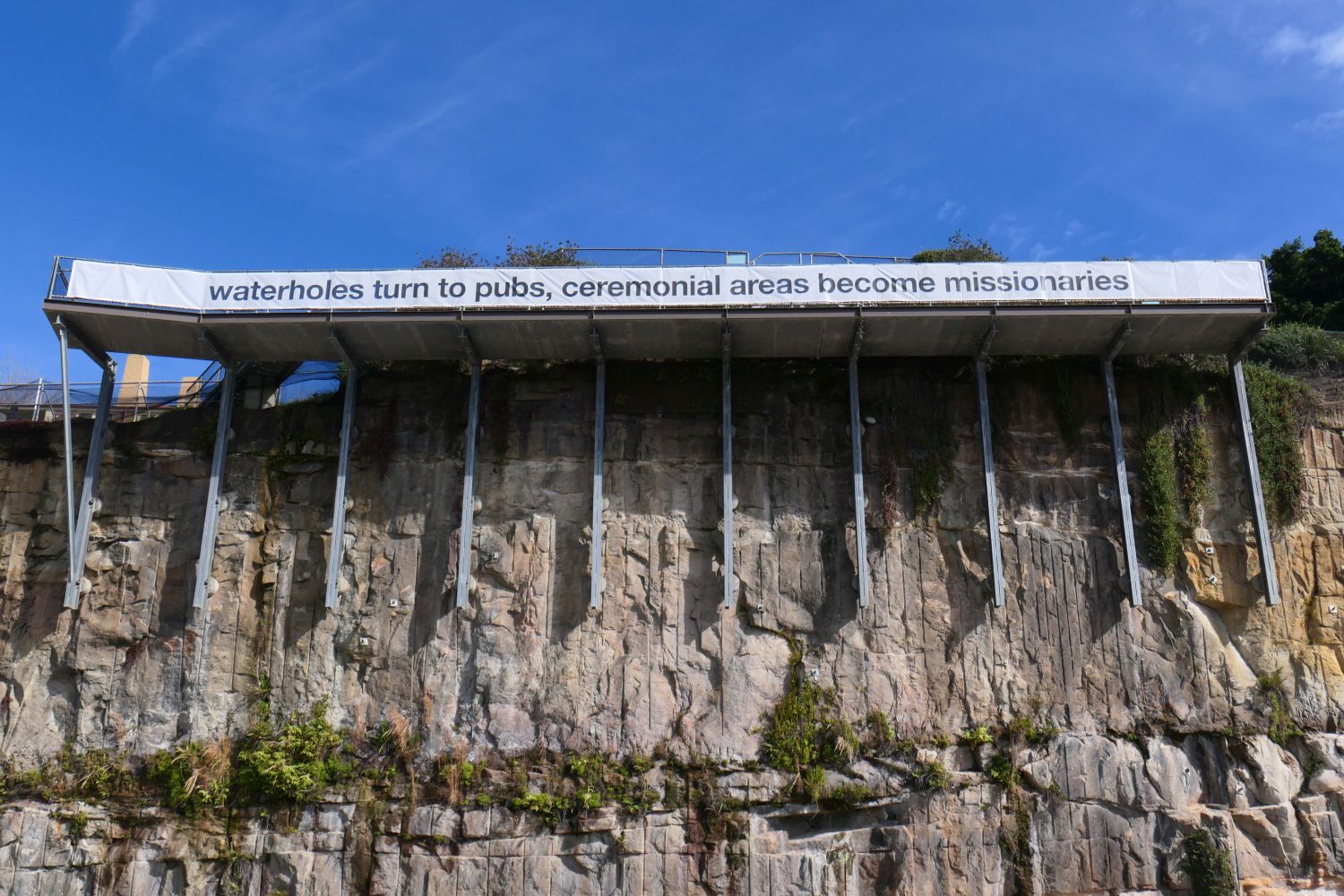 I recognise Kabul, that dusty spread where blood leaks out and simply evaporates. In Aziz Hazara’s, Bow Echo (2019), five small boys stand each ion one of the five-channel video on a small peak the city beneath them. The boys blow toy trumpets with different notes over a low emergent drone. 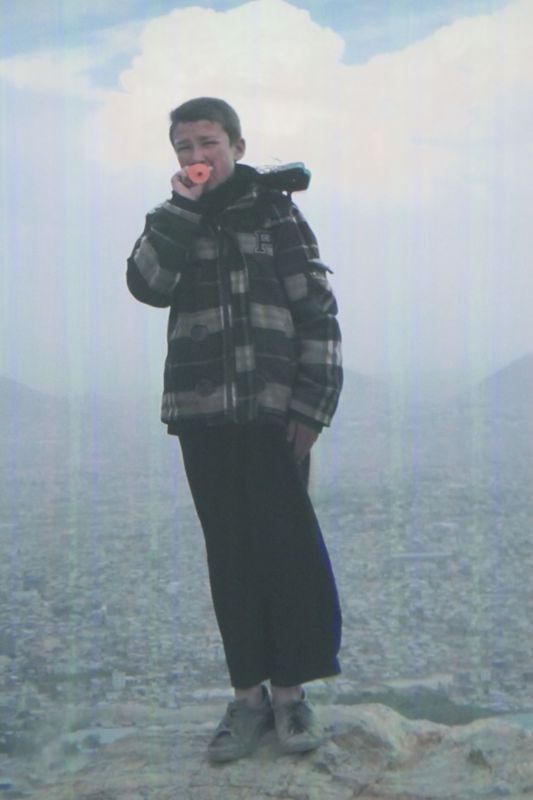 It’s windy, two of the boys get pushed off by the force of air, scramble back up to resume playing these plangent sounds into the wind way above the present or the past below. I was there when the Russians were invading, there was a curfew in Kabul I was sick. I recognise the city, I nearly died climbing out of that gorge, when the bus out from Kabul passed another on a corner and I heard a tyre scrabble and I looked down from the back of the bus and the wheel below me was off the road in air, and Kabul Gorge Tang-e Gharu, a dark grey limestone rock of death waited thousands of feet below me, and I looked at the deserted view, an interested spectator.

The 40-mile stretch, a breathtaking chasm of mountains and cliffs between Kabul and Jalalabad, claims so many lives so regularly that most people stopped counting long ago. Cars flip and flatten. Trucks soar to the valley floor. Buses play chicken; buses collide. The mayhem unfolds on one of the most bewitching stretches of scenery on all the earth. The gorge, in some places no more than a few hundred yards wide, is framed by vertical rock cliffs that soar more than 2,000 feet above the Kabul River below. Most people die, and most cars crash, while zooming around one of the impossible turns that offer impossible views of the crevasses and buttes.[2] 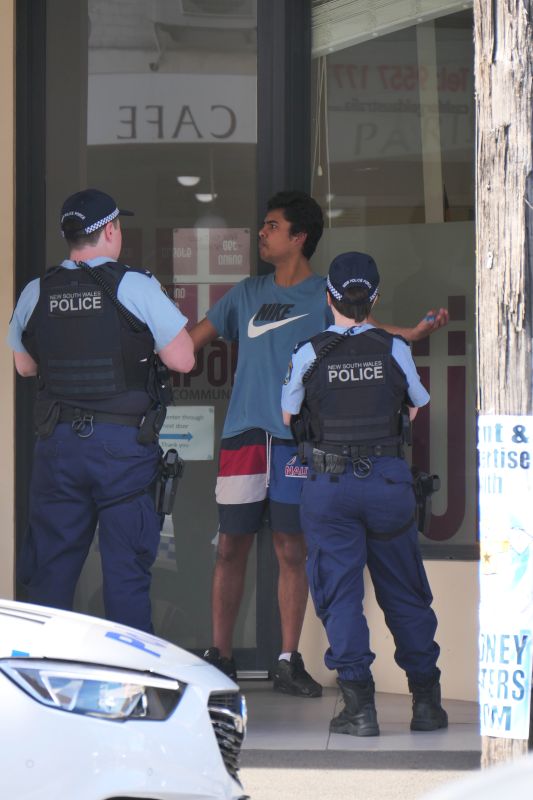 Back in the city, the Inner west where I once lived, conflict and tensions.

Read this first – near Andrew’s place 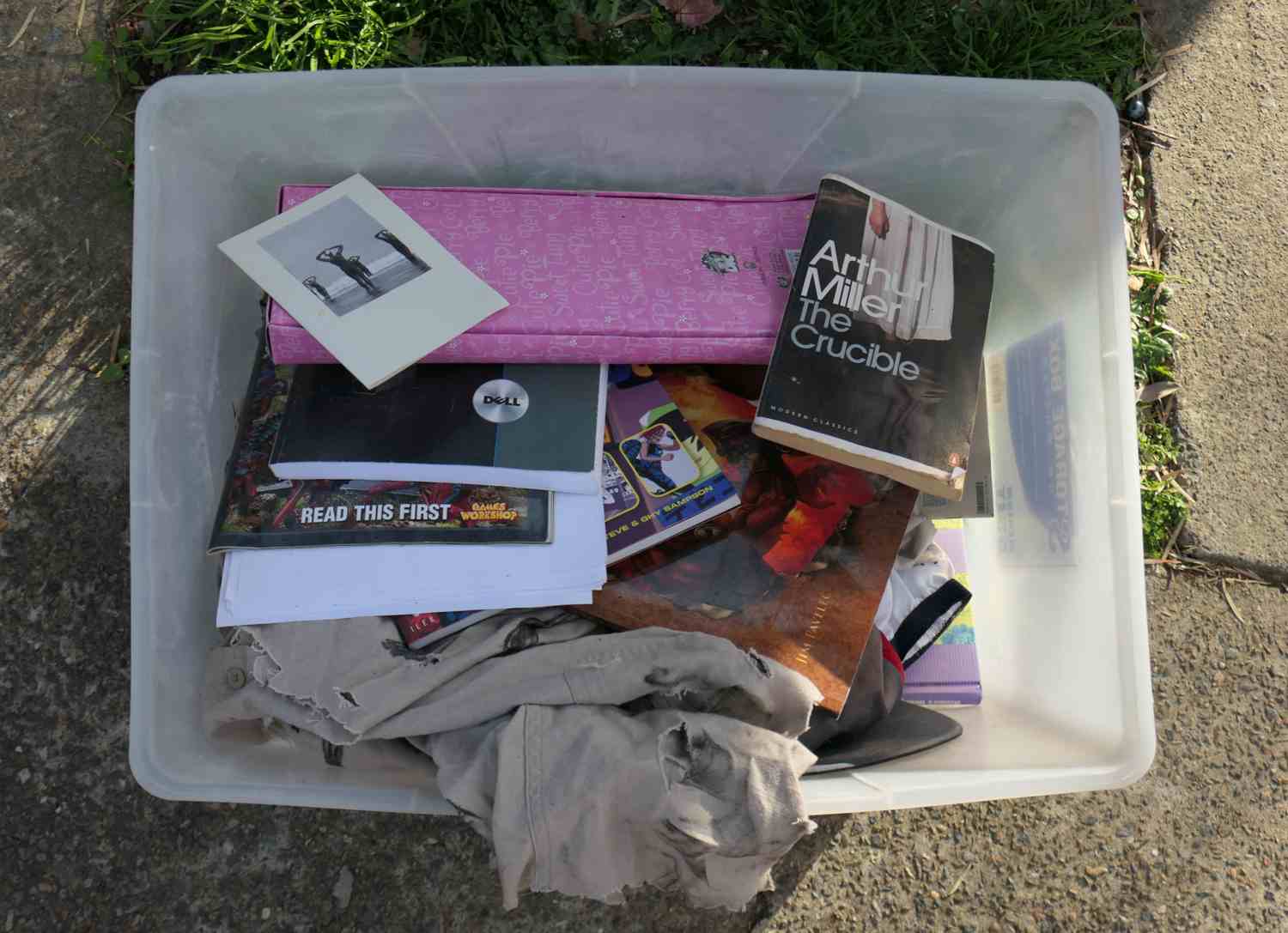 [1] Bourouissa has developed a complex algorithmic system that translates the unspoken language of the Acacia tree in order to share its story. Bourouissa collaborated with MC Kronic (a Waddi Waddi man of the Yuin Nation and local hip-hop/rap artist, activist and poet), Nardean (an Egyptian-Australian MC, poet, singer and songwriter) and French sound designer and programmer Jordan Quiqueret to transform the active energy frequencies of the living Acacia into audible, rhythmic frequencies.’ https://www.biennaleofsydney.art/artists/mohamed-bourouissa/