Climate activist Greta Thunberg is teaching kids about the environment in NSW schools, after the education department encouraged students to study her speeches. Coffs Coast Advocate

‘Just one plane ride away’: Slowing coronavirus is speeding the spread of other diseases. SMH

Three new cases of COVID-19 were diagnosed between 8pm on 13 June and 8pm on 14 June. This brings the total number of cases in NSW to 3,131. NSW Health

Australian sentenced to death in China for drug trafficking honest to a fault, friends say. ABC

We have planted trees and just as many have self-seeded in our garden that began from scratch ten years ago. Our garden also backs onto a forest Jagun Nature Reserve. We went for walk this morning and I thought of artists and trees. 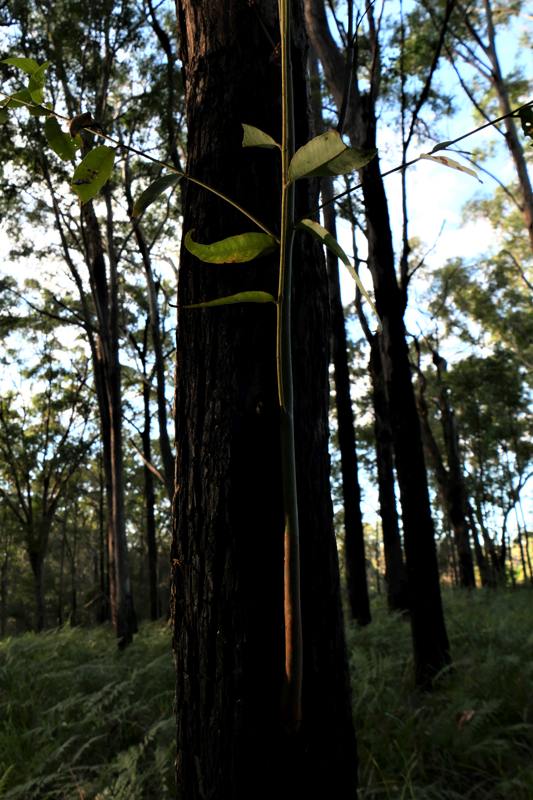 Some artists have personal associations with trees. Vincent van Gogh painted a vivid Mulberry in the autumn of 1889 at an asylum in Saint-Rémy. He wrote to his brother that this was his favourite Mulberry Tree.Chelsea Steinauer-Scudder exhorts you to, ‘Go outside and find a tree that you feel drawn to: perhaps in your front yard, growing in the park down the street, or newly met on a hike through the forest. Go out with the intention of dedicating time to spend with this tree. Set aside real, valuable time.’[1] Less than a year before he was dead. 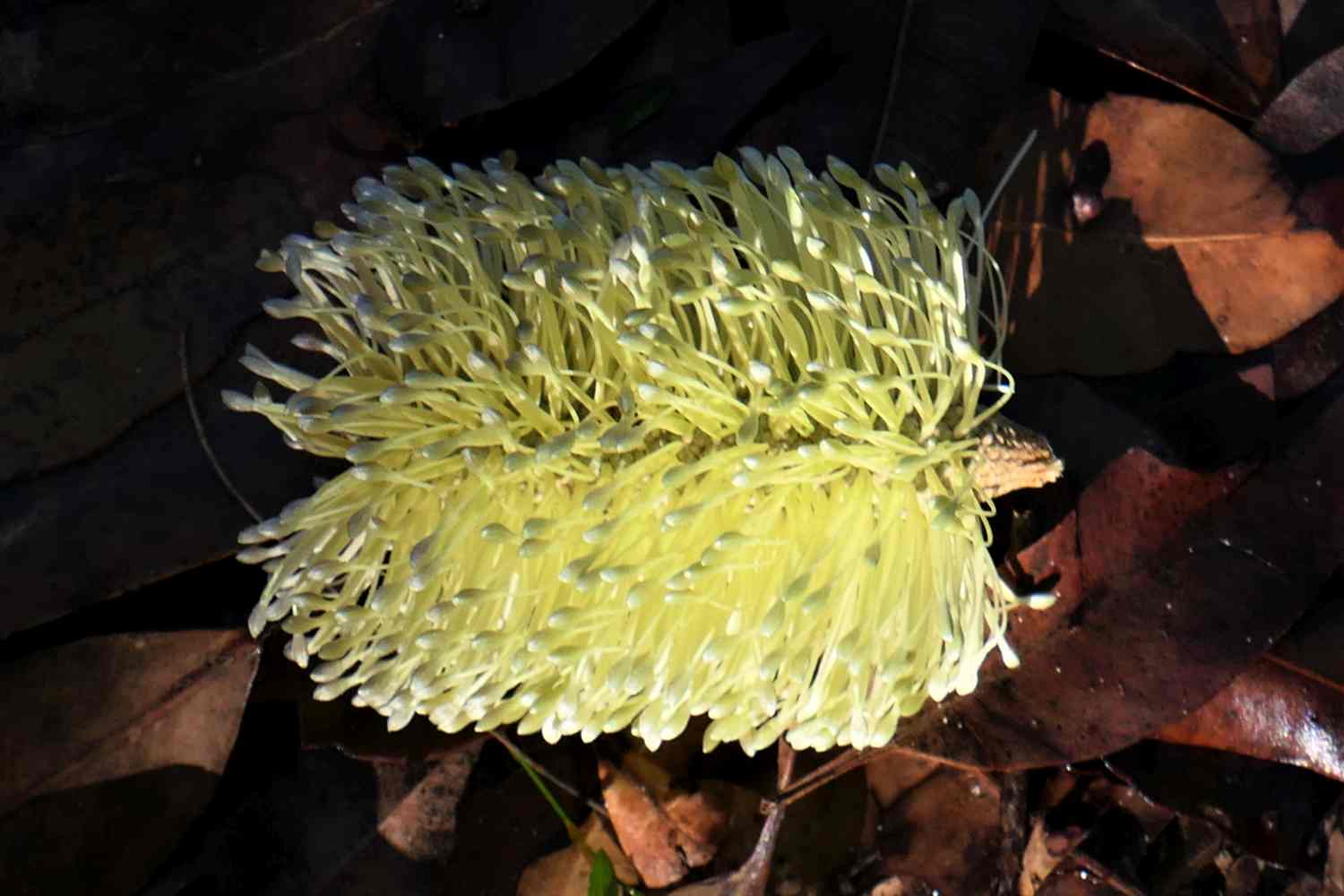 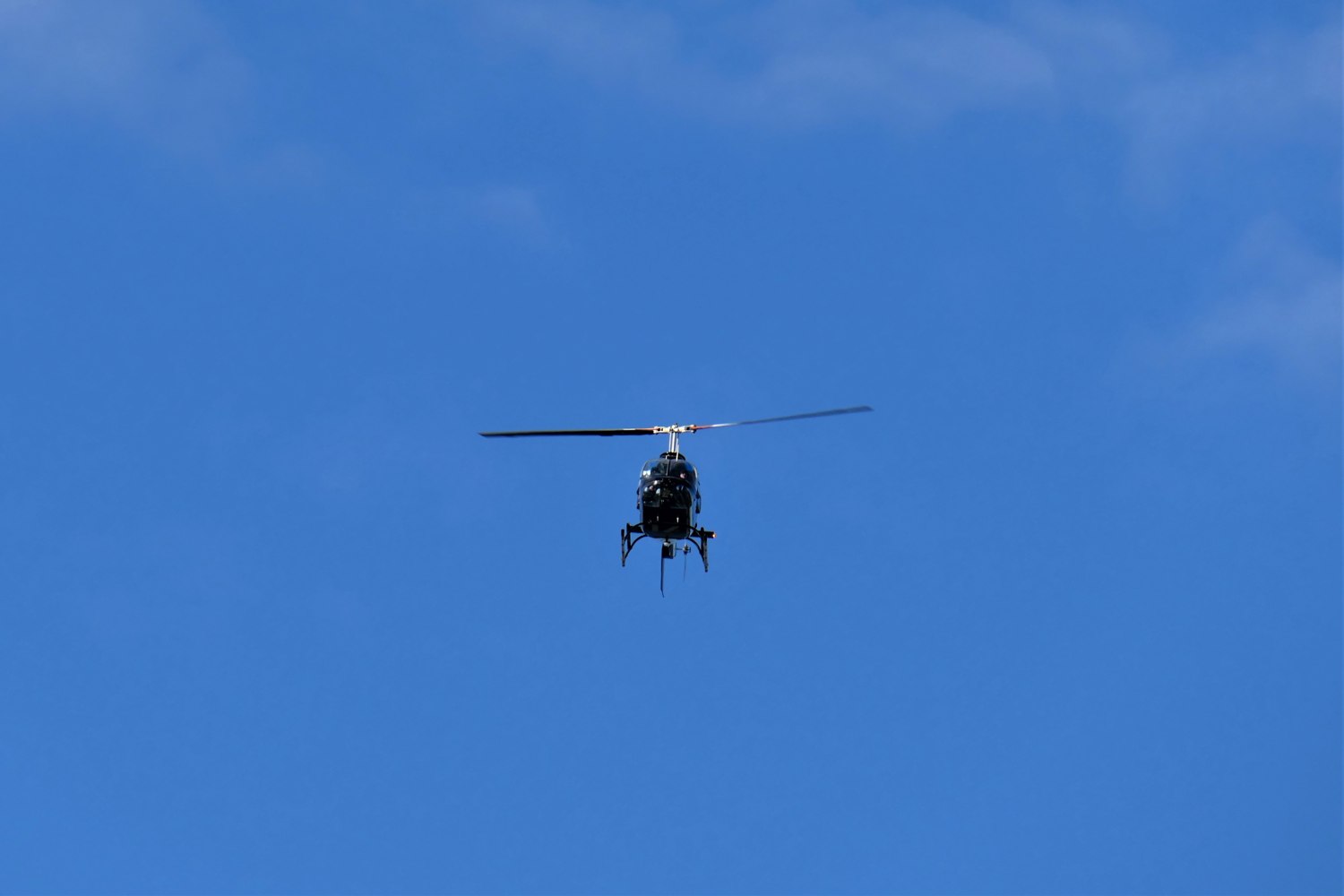 Claude was a pioneer of plein air sketching. His Compagna notebooks (c1638) are immediate and free. A favourite work is his flowing sketch, ‘A ploughed field with artists’ (British Museum). It shows his friends on a ‘field trip’ sitting in the shade of a tree, sketching – the self reflexivity and spontaneity of art is inescapable. 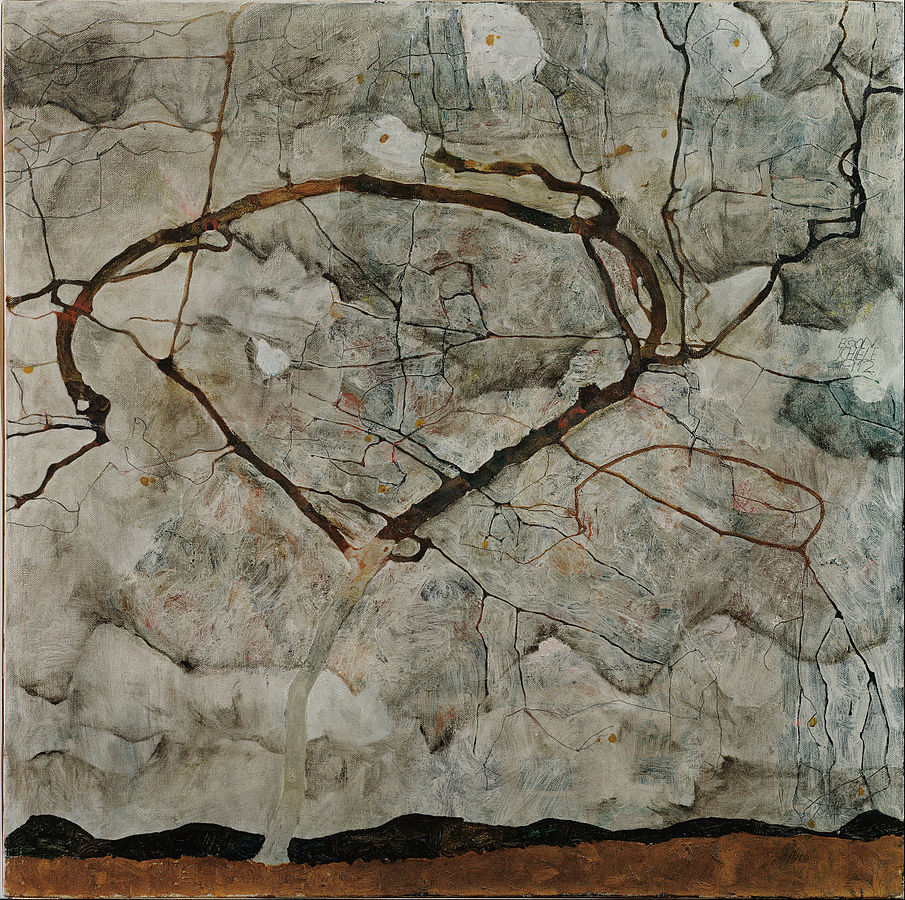 After the rise of landscape painting, trees often became devices for framing views. 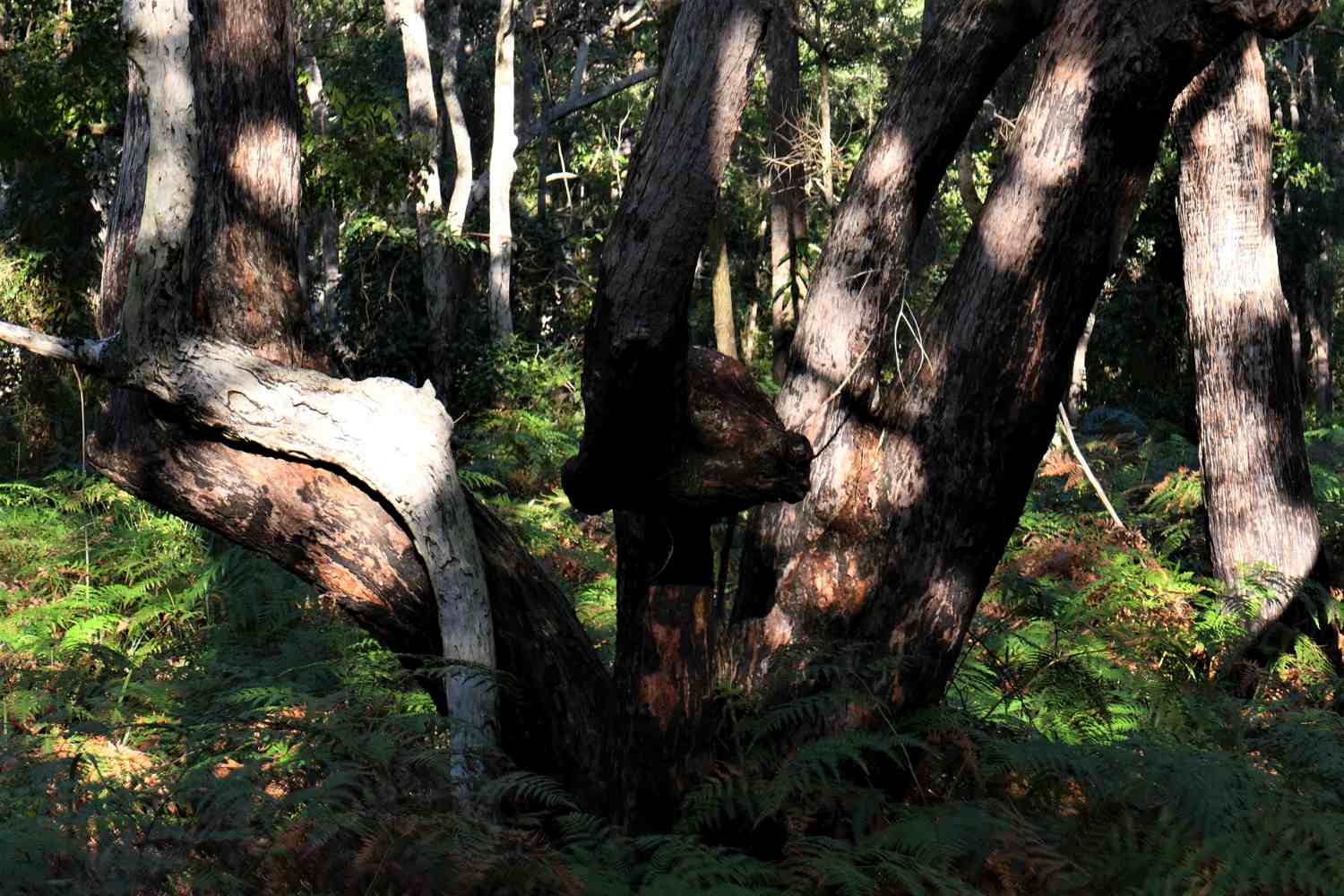 A few artists use actual trees: ‘I have chopped down a 10×10 meter big piece of forest in Finland and sorted it all into different materials: soil, moss, wood, pines, etc. The forest was rebuilt in Finland and arranged by colour.’ Antti Laitinen on his work ‘Forest Square’.[2] 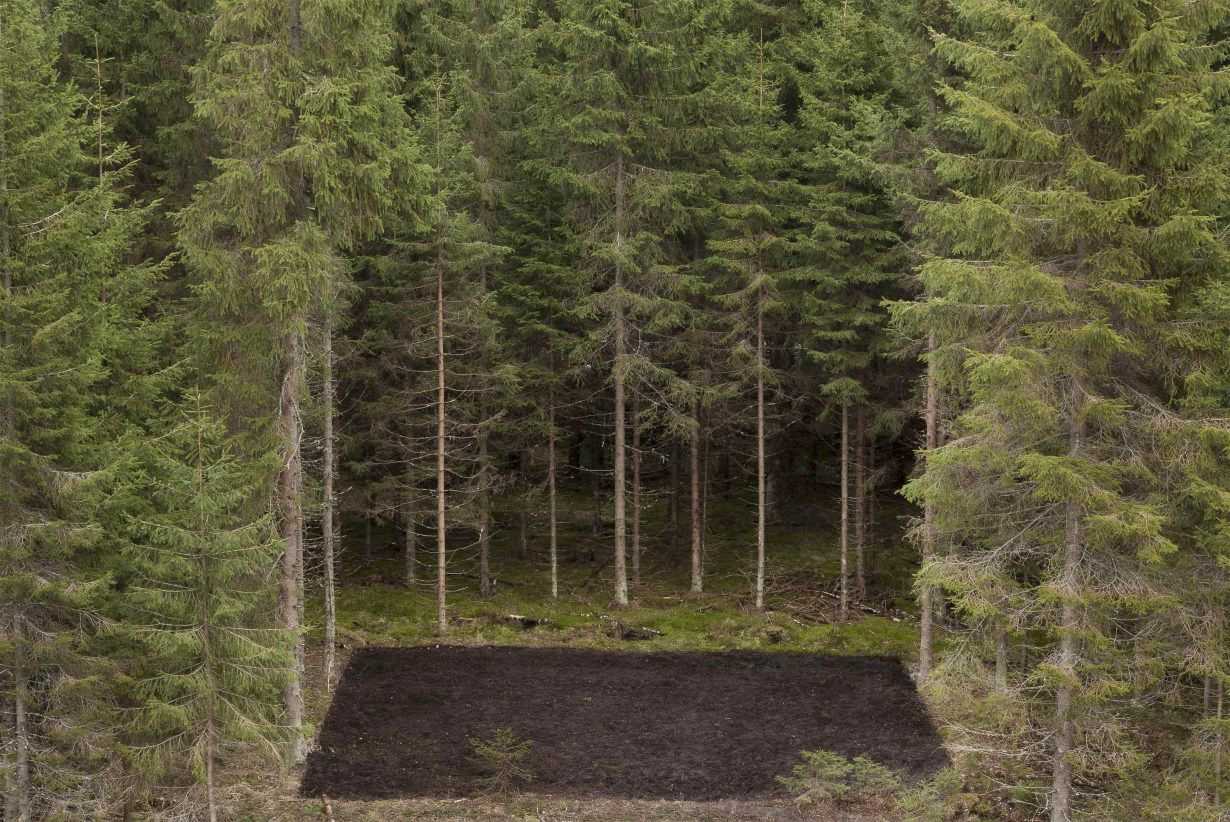 For his show in the Finnish pavilion in the 2013 Venice Biennale. He documented his land-art piece ‘Forest Square’ (2013), for which he cut down a precise square of trees in a forest, then removed all of the natural materials, grasses, moss and even the top layer of soil. He then sorted the material into a flat square identical in size to the original forest clearing through the category of colour. 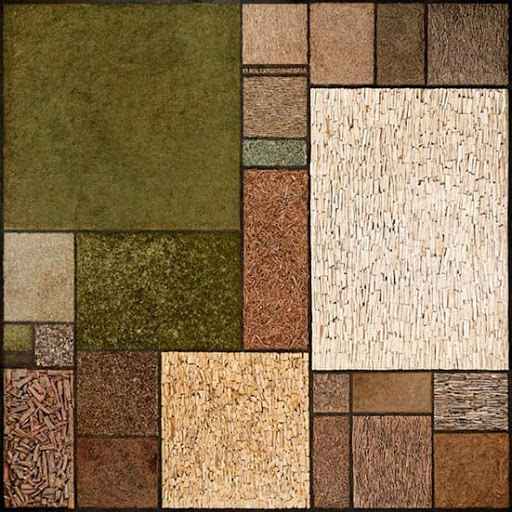 The artist took photographs of these radically different two squares for the exhibition. From a three dimensional living thing, he dematerialised it into falt colours, the flat plane so beloved of art critic Clement Greenberg.[3]

The forest is alive. Thump thump as a Swampy disappears into the brush. White-Cheeks jet about, more Robins than we’ve seen  for ages, Yellow Thornbillls, a Treecreeper spiraling up a Swamp Mahogany, a small group of Cockatoos, Golden Whistlers, White-browed Scrub Wrens and the Fairy Wrens . . . 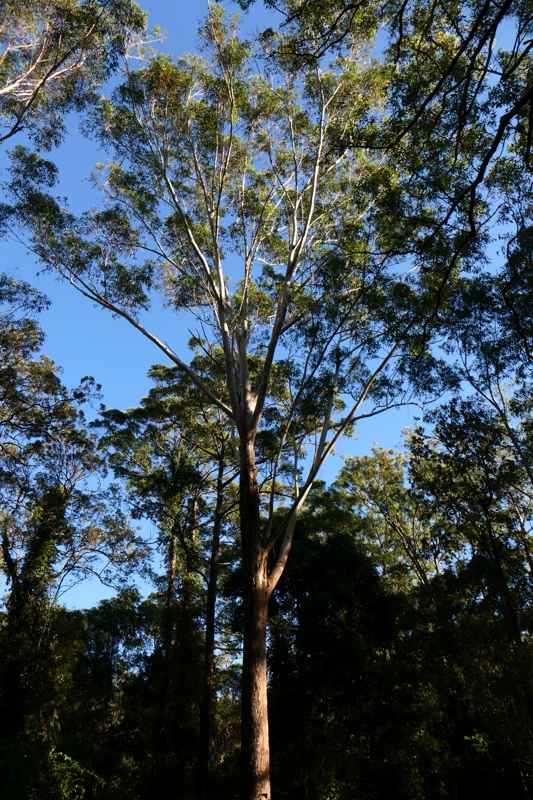 The role of nature . . . is to offer the raw material, to be the mirror that reflects whatever the artist has to express. In its quasi-scientific approach, Forest Square is a kind of experiment on de-mystifying nature. It does not regard forest mainly as a place containing a mystic aura, as something that revives the stressed mind or has this age-old existence beyond generations of people and has even been considered sacred not so long ago in the Finnish culture.[4] 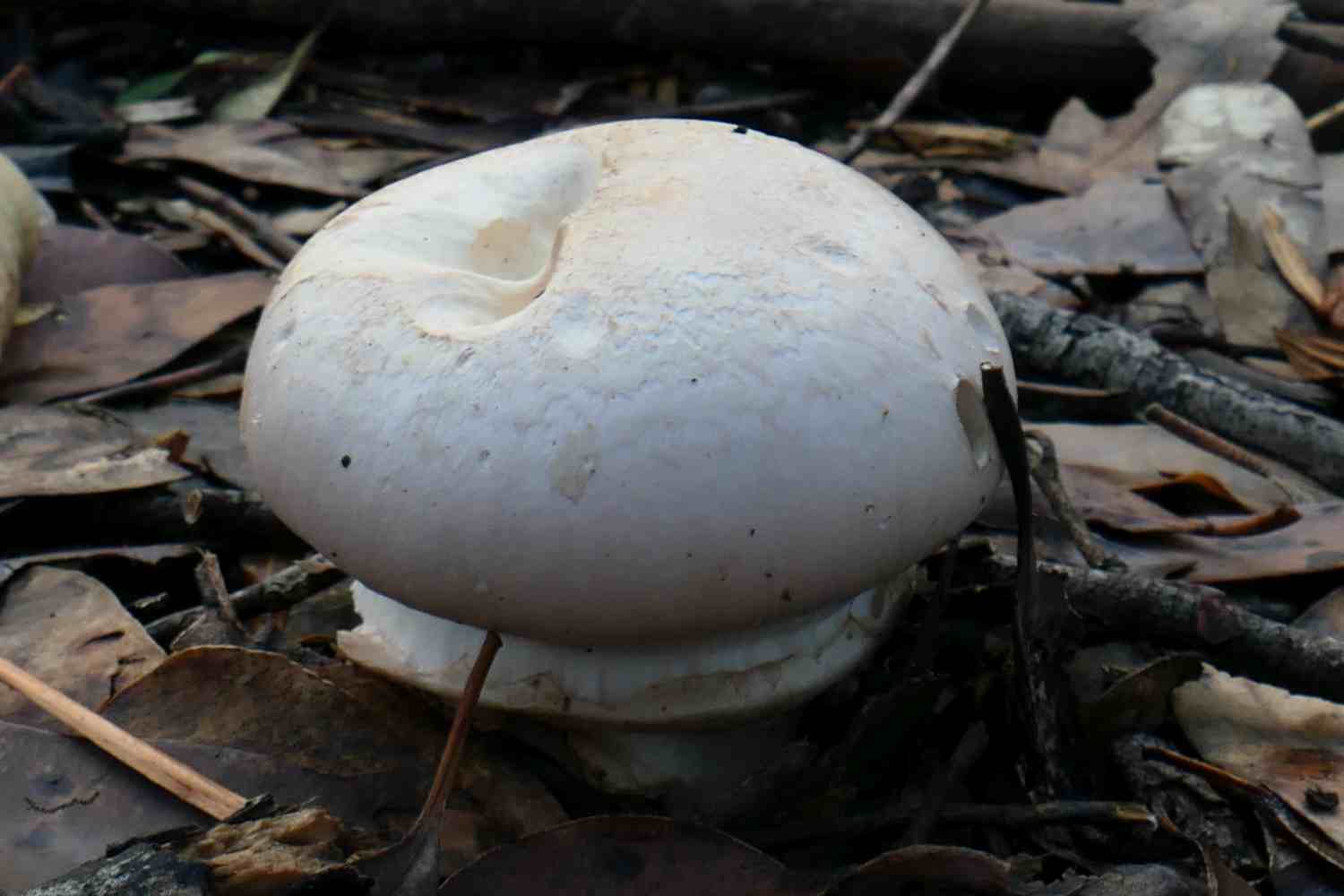 Ai Weiwei’s Tree 2010 is a monumental assemblage of roots, branches, trunks from different tree species of southern China. The sculpture mimics the form of a real tree, although the cuts and joins are awkward and visible. I take it as pointing to the importance of diversity (cultural and biological) being killed off by the monolithic Communist Party and its single-minded goal of economic progress (requiring tight social order). 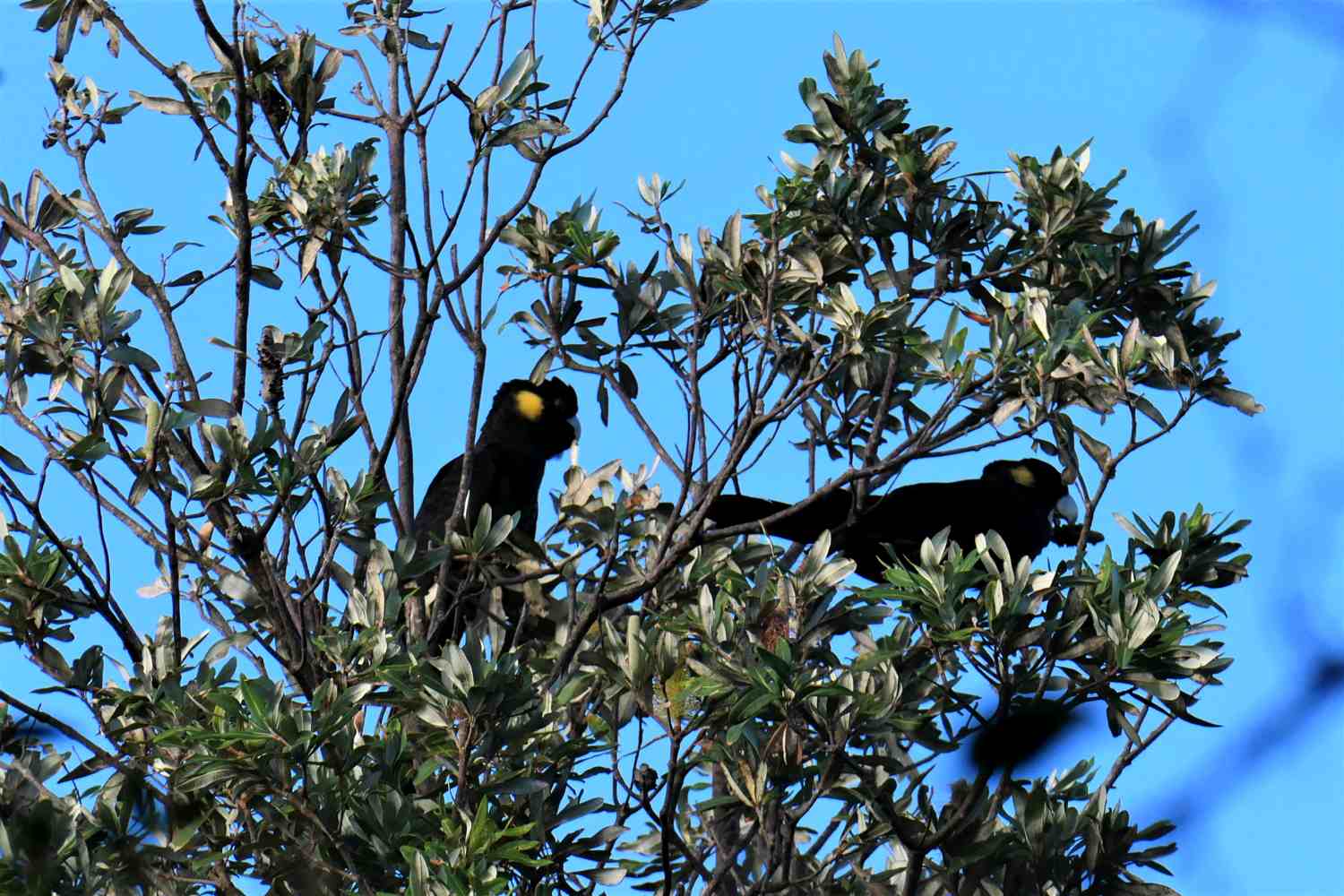 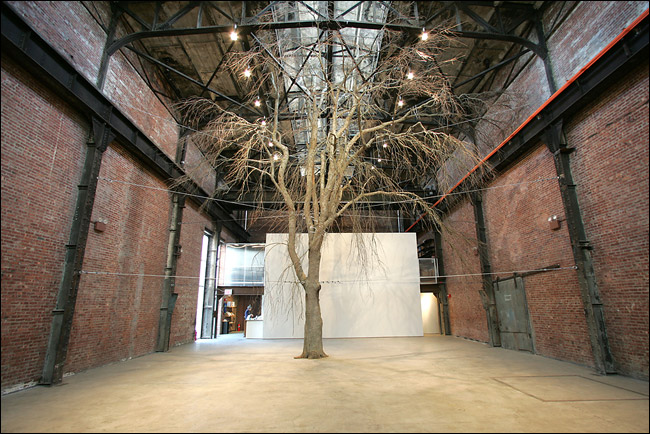 The Scottish artist Anya Gallaccio reconstructed a weeping cherry killed accidentally for her piece ‘One Art’ in New York. She felled and dismantled the 15 metre tree then reconstructed  it with all the engineering required to support it visible.

In one art, Gallaccio’s aesthetic act is to move the tree from its normal outdoor environment to an urban industrial building adapted as an exhibition space. Yet the process of disassembling and rebuilding the tree transforms it – drawing attention to the extraordinary formal and structural properties of the tree.[5]

The tree looks like it has spent months in an orthopaedic ward, steel bolts proliferate, and steel cables stretch to keep the amputated, rootless tree standing, emphasising strength, weight. 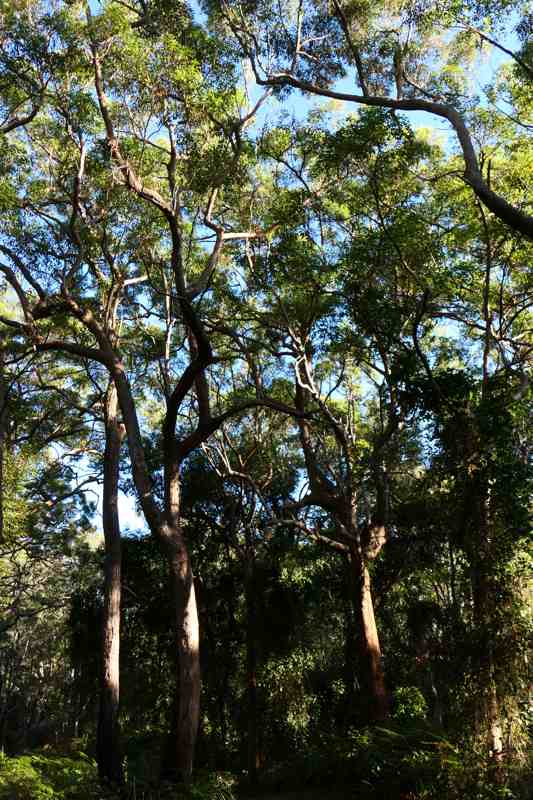 At the Venice Biennale of 2012 Antti Laitinen performed ‘Tree Reconstruction’. Five birch trees were cut up in  Finland and sent to Venice. In front of the pavilion he tried to bring them back using just nails and a hammer. he said they looked like ‘Frankenstein trees’. 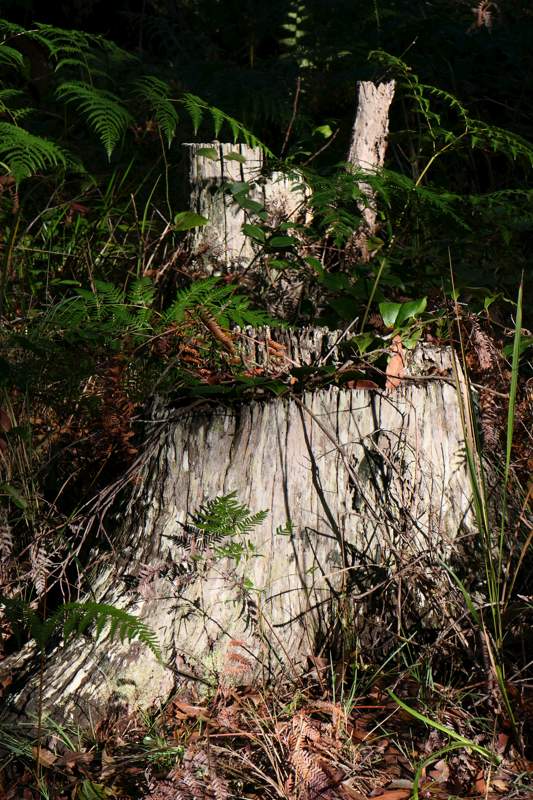 Ken Johnson titled his review, ‘Sculpture That Looks Very Much Like a Tree; Actually, It Is a Tree’:  ‘If you passed it in an ordinary outdoor space like Central Park, you would not give it a second glance; it is not an especially beautiful or remarkably big tree. But in a type of indoor setting where you rarely if ever encounter trees of this sort, it seems huge and infinitely complex. With its crusty bark; gnarly, serpentine limbs and profuse finer branches; and its presumably enormous weight, it gives you a feeling similar to that of being up close to an elephant or a whale.’ [6] 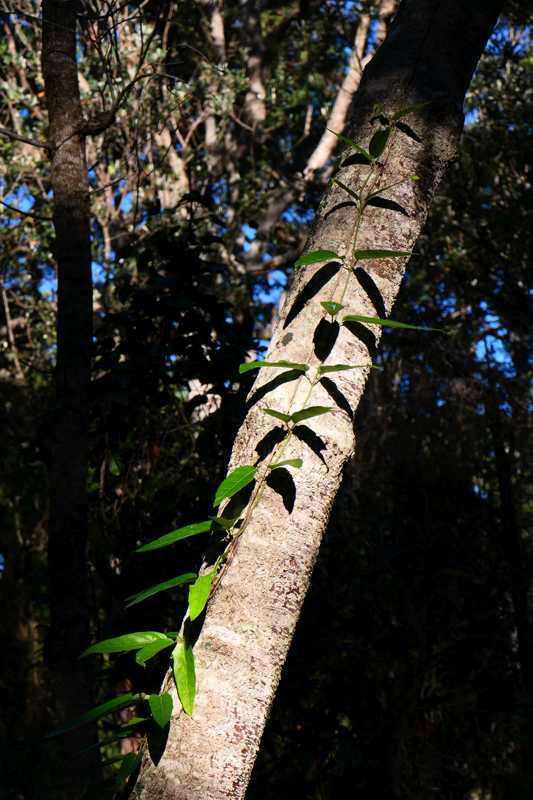 ‘I had aimed to have the tree dissected in uniform eight-foot lengths (roughly human-scale) to emphasize the physical experience of being within the space of a tree and to impose a serial, rational logic . . . I’m interested in basic, rather banal stuff, like how big trees are and how we relate to them physically. I’m a real townie; I’m a little bit terrified and overwhelmed by nature. My curiosity is more morbid than celebratory.’[7] 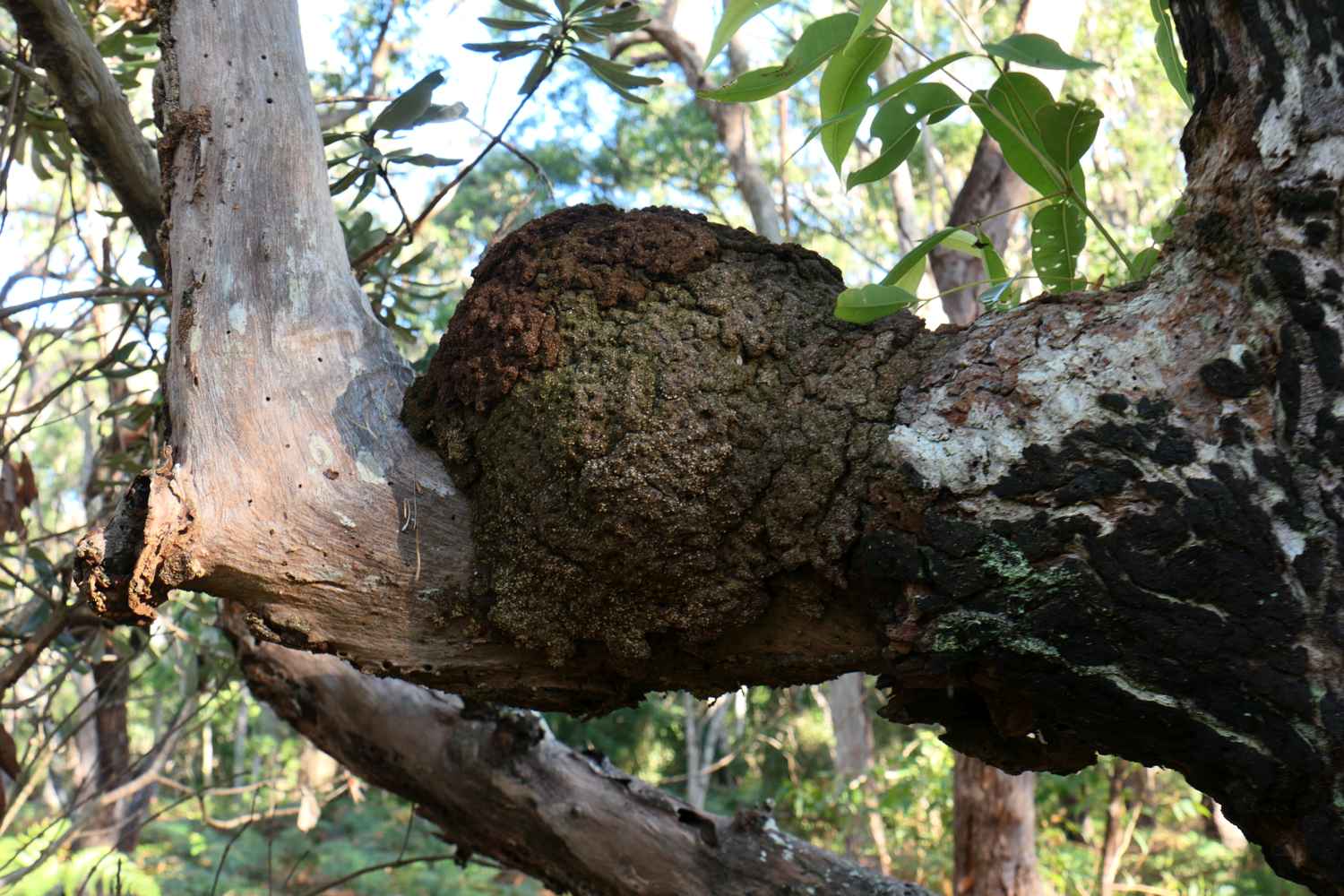 How were paper birch and Douglas fir communicating? Well, it turns out they were conversing not only in the language of carbon but also nitrogen and phosphorus and water and defense signals and allele chemicals and hormones — information. And you know, I have to tell you, before me, scientists had thought that this belowground mutualistic symbiosis called a mycorrhiza was involved. Mycorrhiza literally means “fungus root.” You see their reproductive organs when you walk through the forest. They’re the mushrooms. The mushrooms, though, are just the tip of the iceberg, because coming out of those stems are fungal threads that form a mycelium, and that mycelium infects and colonizes the roots of all the trees and plants. And where the fungal cells interact with the root cells, there’s a trade of carbon for nutrients, and that fungus gets those nutrients by growing through the soil and coating every soil particle. The web is so dense that there can be hundreds of kilometers of mycelium under a single footstep. And not only that, that mycelium connects different individuals in the forest, individuals not only of the same species but between species, like birch and fir, and it works kind of like the Internet. Suzanne Simard [8]

Giuseppe Penone Tree of 12 Metres 1980–2 Tate.  An industrially sawn timber beam visible at the base climbs into a carving, the spine of the tree the beginnings of its branches – detected by clues given by the knots in the wood. Penone lives in Turin but grew up in a farming community in Northern Italy, he thought of reversal, returning the tree to the form it had once had. He made his first ‘Albero’ (Tree works) in 1969. In 1970 two ‘Trees of 12 Metres’ were carved fro the Moderna Museet, Stockholm and the Aktionsraum, Munich. These early Trees were still partially attached to the industrially-sawn beams were supported. Penone then worked on thicker beams so that the sculptures could stand freely. 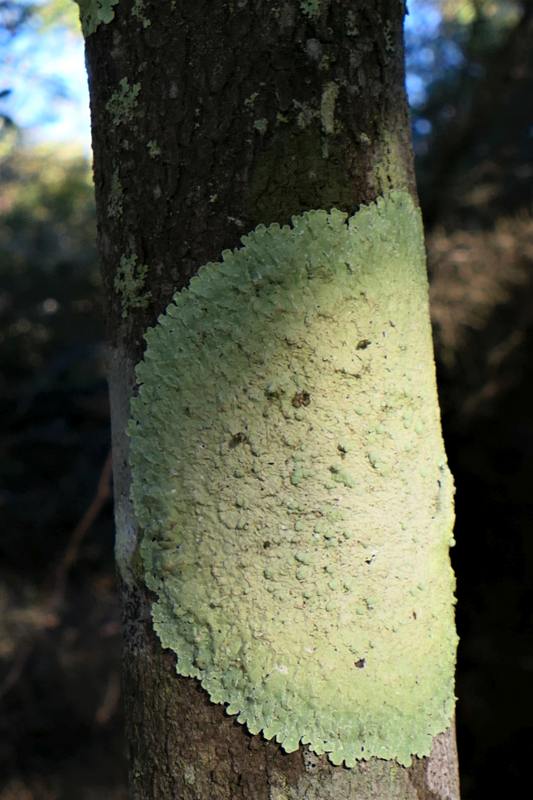 What most intrigues me, a constant concern of my poetic vision, is the relationship between the real time of growth and the personal time of ‘flaying’. The curiosity of discovering a new tree, and hence a new story, every time, and the stimulus in this sense that comes to me from the imaginative quality of every door, table, window, or board – all of which contain the image of a tree – explain the motivation and urgency of my recourse to this kind of operation, which is not repetition, but a new adventure every time. [9]

Kunié Sugiura Tree Trunk Bark 3 , 1971, Tate. Japanese artist Kunié Sugiura worked with the conceptual photographer Kenneth Josephson, and uses painting and photography together. This work is the direct application and exposure of photographic emulsion and acrylic on canvas. His study of tree bark looks to have the delicacy of watercolour with an abstract pattern. 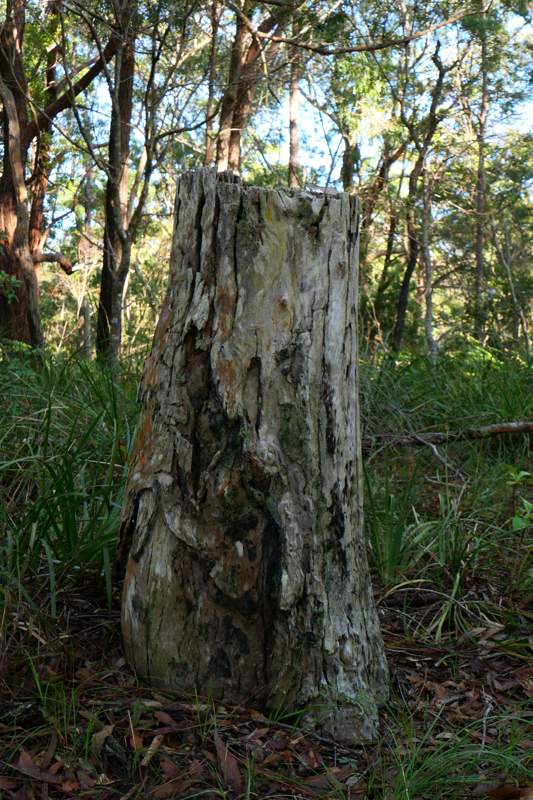 This remind me of Thomas Kershaw, the greatest faux artist of all time, who I once wrote a poem about (lost). He started to paint pictures but found a talent for painting wood and stone with such meticulous accuracy they were trompe l’oeil. He could marble on huge pieces of slate so they felt cold to the touch like real marble. His show ‘Imitation of marbles and woods, for house decoration’ at the Great Exhibition of 1851 was a great success, and he won him the prize medal.[10] His talent was handy for the rich who were not quiet rich enough for the real thing. Kershaw became highly sought after and died a wealthy man in 1898 leaving ten million pounds in today’s terms.

We come out of the woods and find the sea. 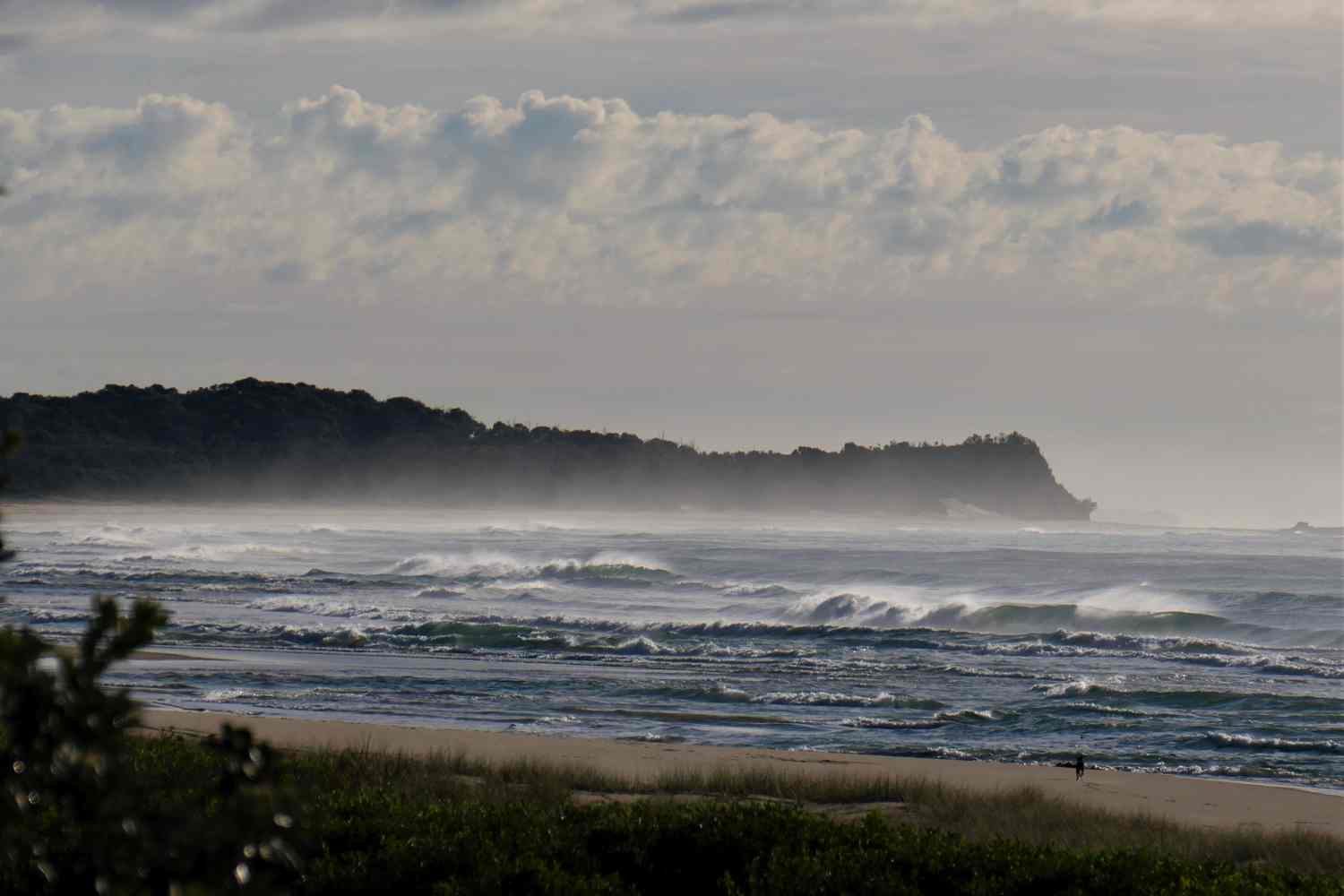 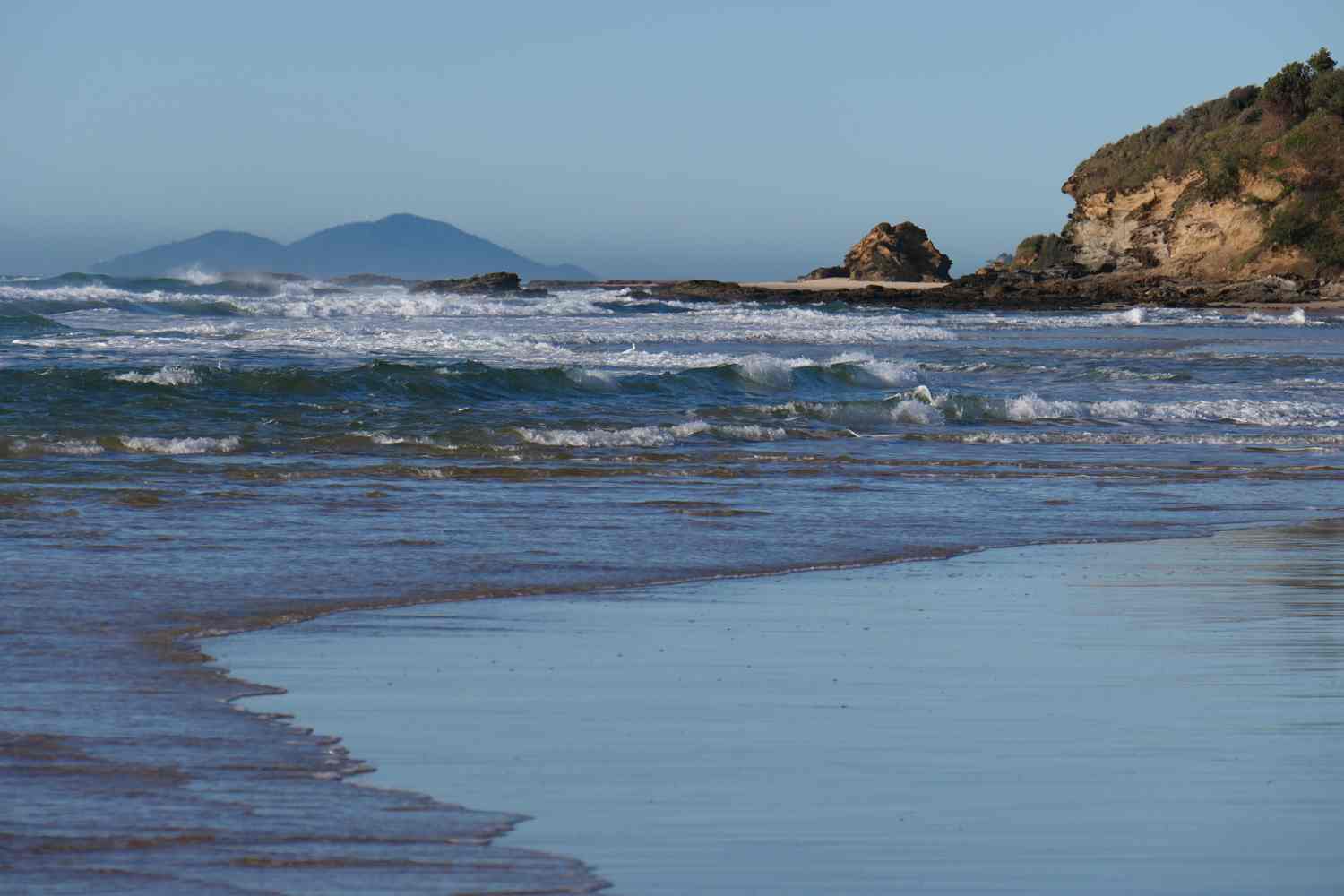 Coming back the other way we find our resident joey on the forest edge, looking all grown up. 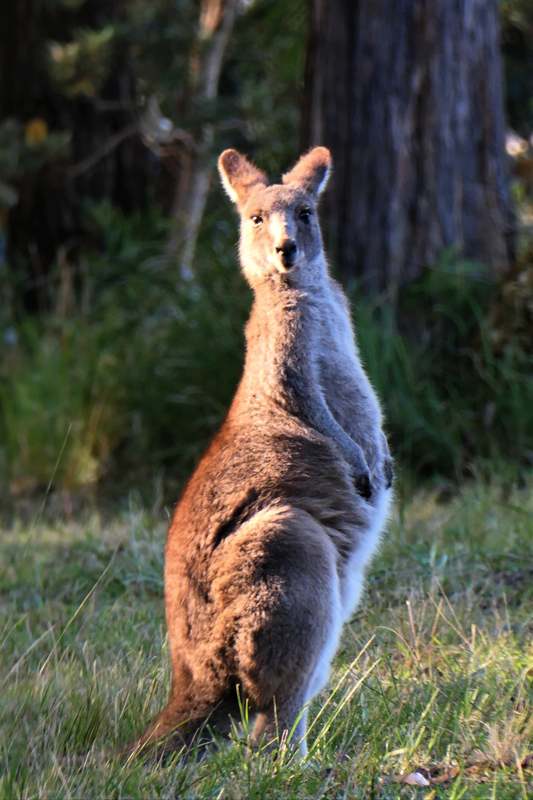 More on trees and art in the next day or two.

Wyn and I are are doing fine in this pandemic, not caught the virus,not lost our jobs, but for some people it’s been awful and tragic. And in this region one particular problem is youth unemployment:

Half of Australia’s 25-year-olds are unable to secure full-time employment, despite 60% holding post-school qualifications.

These figures are terrible BUT these are not figures since the pandemic but from 2017/2018. The situation will be much worse now. ‘The COVID-19 pandemic is likely to have a disproportionate effect on young workers according to the ILO.’ [12]

‘The greatest impacts felt by adolescents stem from school closures, being in the house with family members, and not getting to see friends and peers. Adolescents have different developmental needs than adults. Teenagers are at the stage in life when they are very invested in social connections and in separating from their parents. So, COVID-19 social distancing requirements have a different emotional impact on them than on adults.’ Tamar Mendelson.[13]

I don’t know what to do about this problem, but one should be aware of it, in case there is anything one can do in the future. 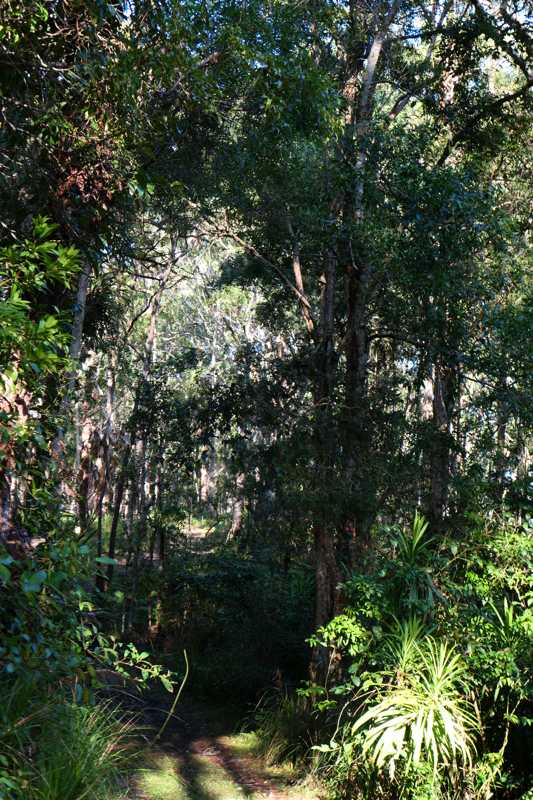 Our way home through the forest

[8] Suzanne Simard, ‘How trees talk to each other’ https://www.ted.com/talks/suzanne_simard_how_trees_talk_to_each_other/transcript?language=en

[10] He also won the gold medal at the Exposition Universelle in Paris a few years later. A number of French painters accused him of being a charlatan, so he demonstrated his technique in front of 700 French painters. He gained gold again at the London Exhibition of 1862 with an expanded repertoire of panels of imitation embossed leathers, damask silks, tapestries and gothic & Venetian wall decorations. Stewart Mc Donald, 2004.  http://www.stewartmcdonald.co.uk/kershaw/kershaw.html

[13] THE IMPACT OF THE COVID-19 PANDEMIC ON ADOLESCENTS, Johns Hopkins Center for Adolescent Health, https://hub.jhu.edu/2020/05/11/covid-19-and-adolescents/