We are witnessing a critical time in history. You should keep a diary. Paul Daley, Guardian 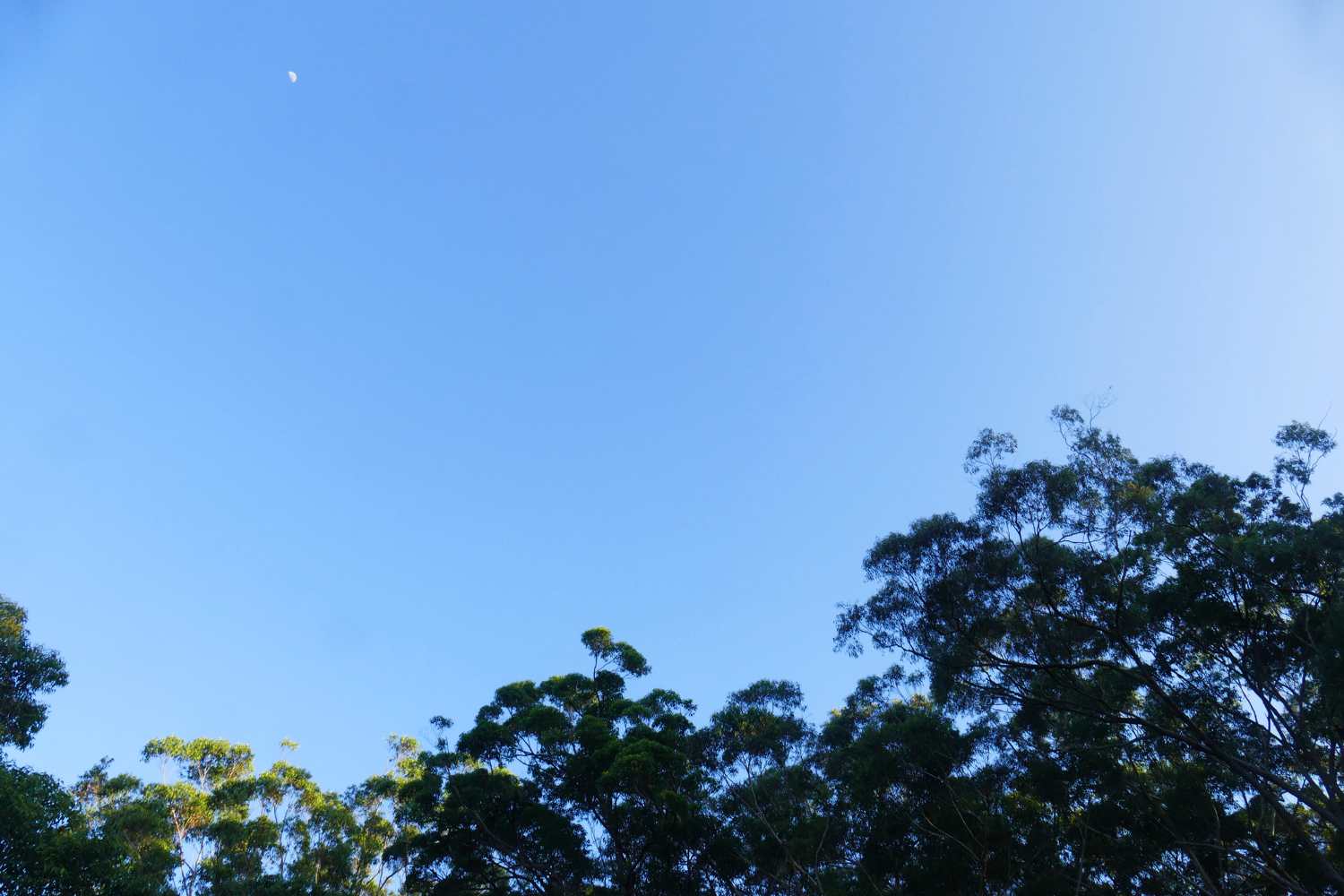 Watching the trees arc across the sky and the moon
shrinking, space not fully present, waiting for night
to float into position, like most Australian fauna.

Apollo 13 set a record, still standing, for physical distancing, the farthest humans have ever been from Earth, over 400, 000 km.

The crew (Haise, Swigert and Lovell) were on their way to the moon when they heard a bang. ‘Houston, we’ve had a problem.’ An oxygen tank had exploded destroying a service module panel, venting the two oxygen tanks into space, oxygen, needed for breathing and generating electricity. Houston worked out a possible solution. Apollo swung round the dark side of the moon using its gravity to slingshot back to Earth,

Dangerous levels of CO2 were building up. The crew had to fit a square CO2 scrubber to the circular opening of the lunar module’s environmental-control system that used lithium-hydroxide canisters to absorb CO2. Humans are bricoleurs. The crew successfully improvised using hoses, plastic covers ripped from procedures manuals, maps, duct tape, and stuffed socks into the ventilation hole. They moved from the command module into the lunar module that became a lifeboat.

The module, designed to support two men on the lunar surface for two days was adapted to support three men for four days. The temperature dropped to 3 °C inside the unlit spacecraft, Lovell and Haise wore their lunar boots and Swigert put on an extra coverall, not being scheduled to walk on the moon. They were rationed to one and a half glasses of water a day. The astronauts were all test pilots, familiar with critical situations. They did not complain. 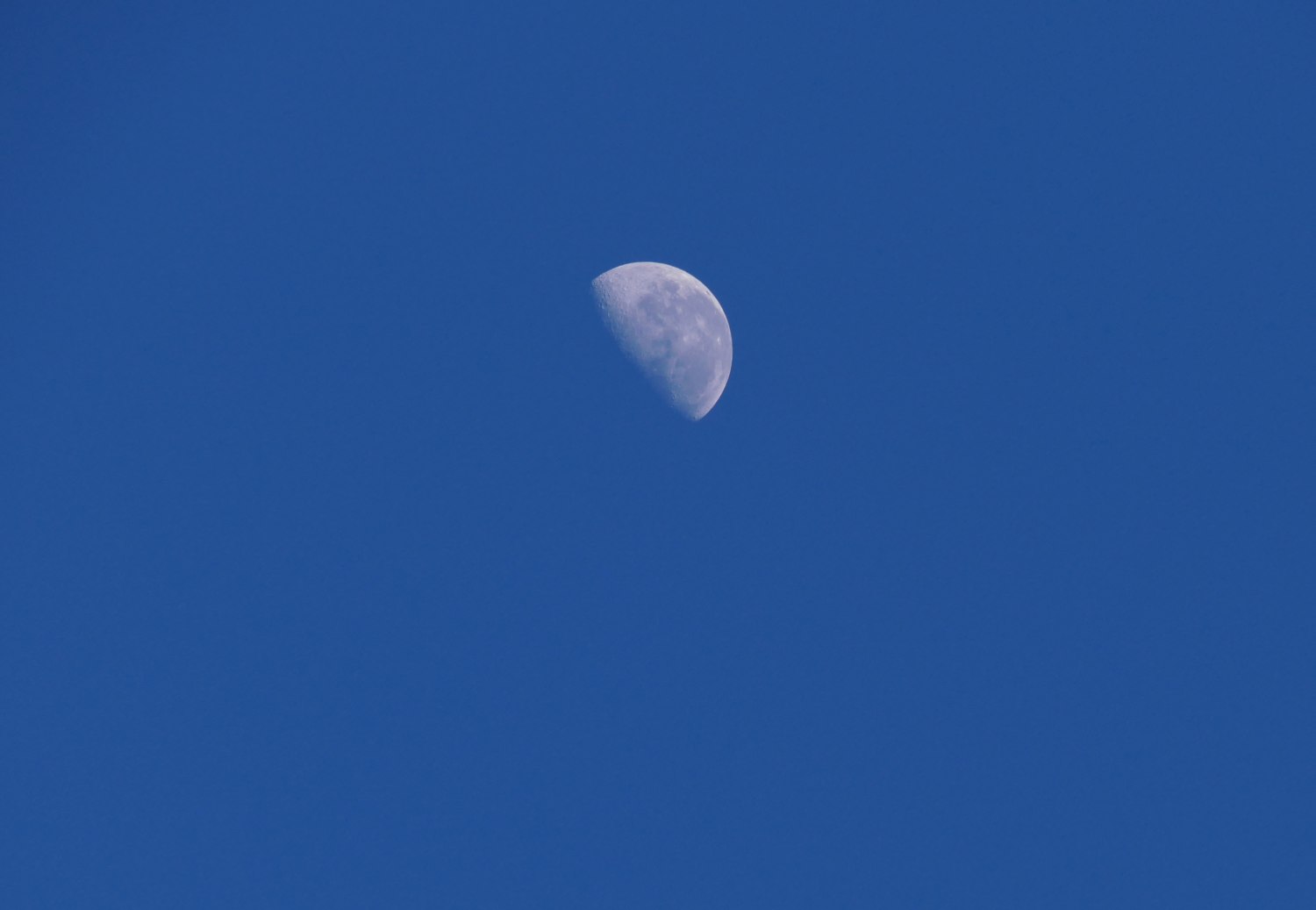 The blame game for poor readiness and sluggish response to the pandemic will be circulating the globe for years.
Ah how shameless, the way these mortals blame the gods.
From us alone, they say, come all their miseries, yes,
but they themselves, with their own reckless ways,
compound their pains beyond their proper share. Zeus[1]

This issue of bricolage explains so much. Why for example, during the most rapid period of brain cc growth, cultural development (as measured by stone tools) hardly changed, then over a million years later, during the early human cultural explosion, brains actually got smaller. The answer is that internal brain structures are plastic, and the mind is fluid allowing for language,  the tool for thought that allows us to continue to invent ever more useful cognitive artefacts that in turn support even more invention.

The use of outside aids (pen and paper,computer) help us think and act, through bricolage, both cumulative and pervasive. The Apollo program relied not just on the space program, but centuries of mathematics, theory, technology and politics. The bricoleur keeps the tools from the last job and adapts them to new forms and often unintended usage, and this happens on the cultural scale.

Homo sapiens displays remarkable behavioural flexibility compared to other species. Our genetics does not define us and while our biology constrains us, we have still learnt how to fly, much faster and further than birds. From our sheer inventiveness we now have so many tools at our disposal, mostly technologically advanced machines we have come to rely on, that they limit our creative powers as bricoleurs. We will invent machines to wash our hands, not just dry them. (‘And in our own time the ‘bricoleur’ is still someone who works with his hands and uses devious means compared to those of a craftsman.’ Claude Lévi-Strauss, The Savage Mind ( La Pensée sauvage), 1962. His book of structural anthropology popularised the concept)

[I drive to Nambucca to get a hard drive fixed for the second time. Technology can be as infuriating as another human being.] 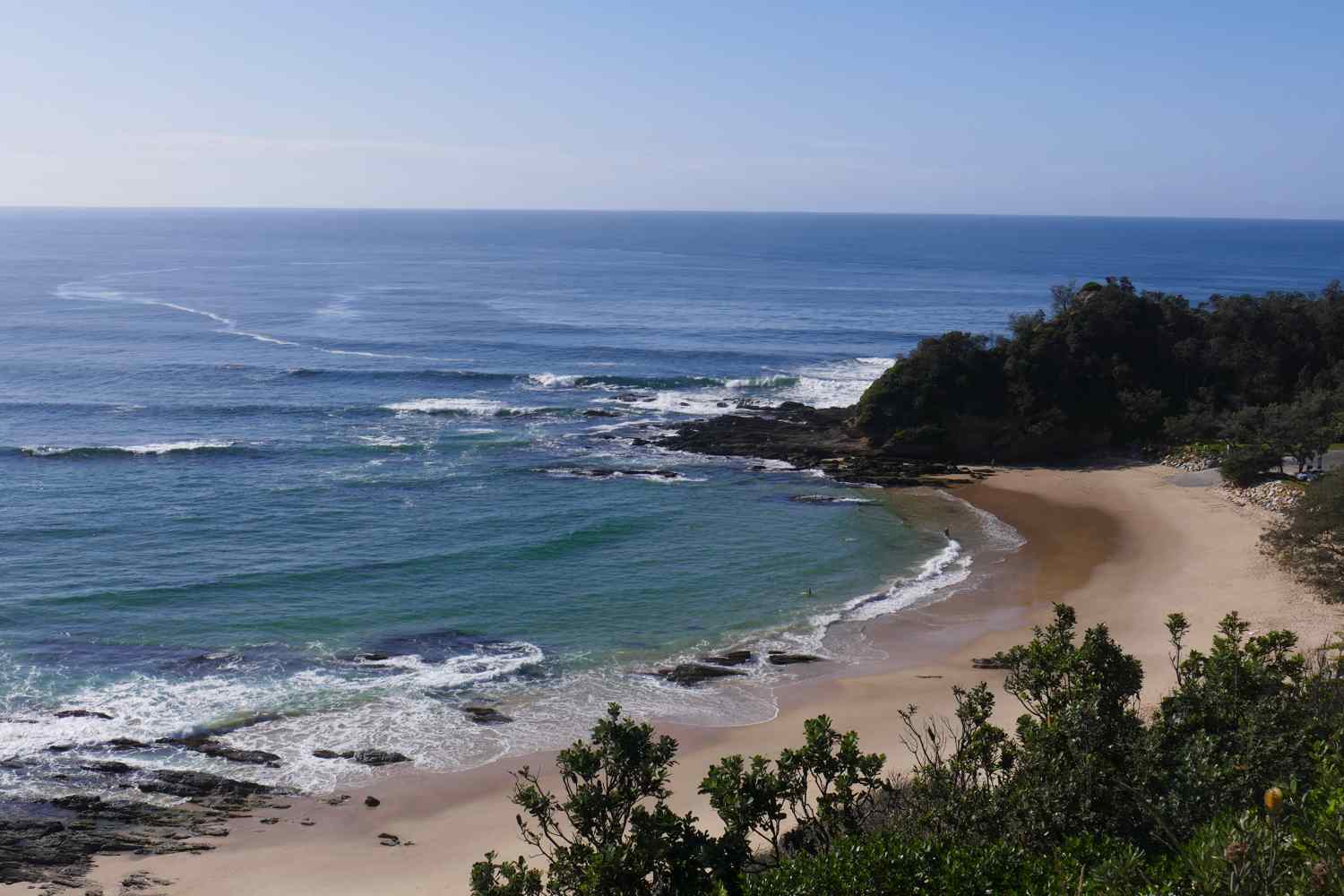 I never tire of this view that launches out into the world
of sea and two rivers, an operatic sweep with mountain backdrop. 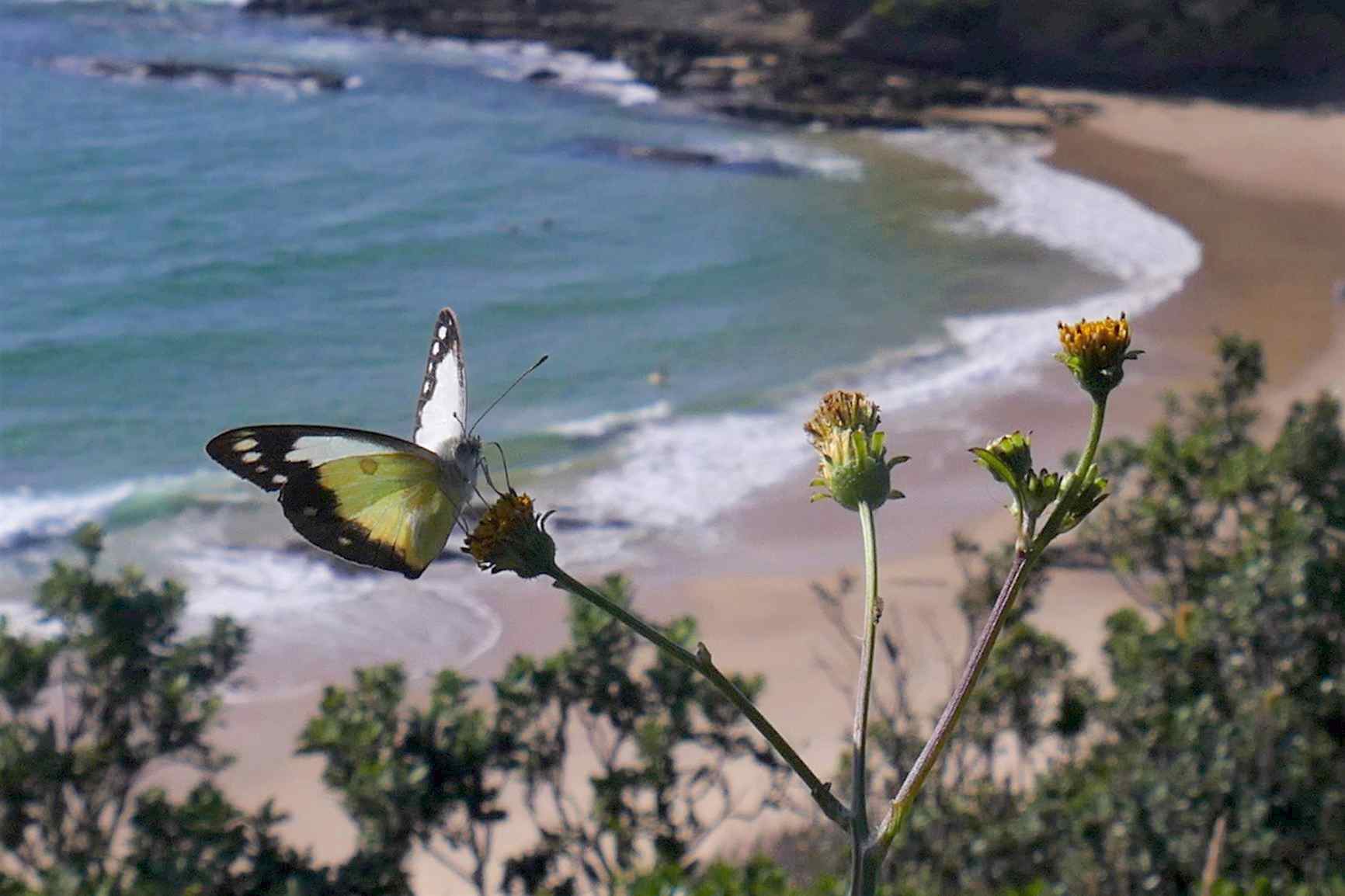 Shelley Beach, one of our swimming beaches, gleams a postcard look,
not the beach but reproductions, composed, a promise that existence
has benefits, and problems. The Caper White is flying from flower to flower
so much farmer’s friend and bur marigold. Weeds are taking over.
It’s slightly busier than usual, the city beaches are closed. 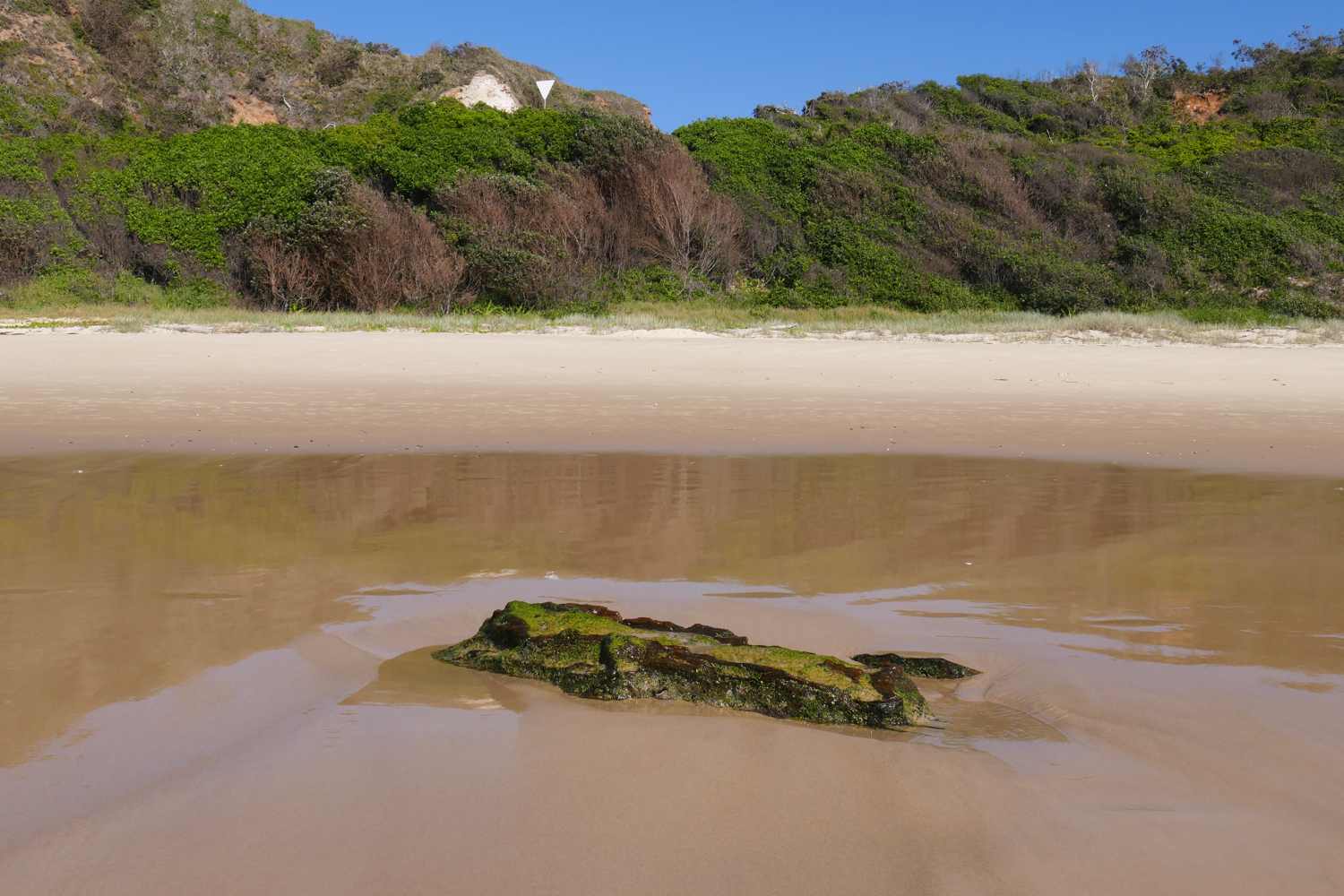 We seem to be the only ones enjoying walking in the water
looking for small stripy fish in the rock pools. Wyn climbs
to photograph Banksias pushed almost horizontal by winds,
I wait and watch her pulling out weeds she happens on. 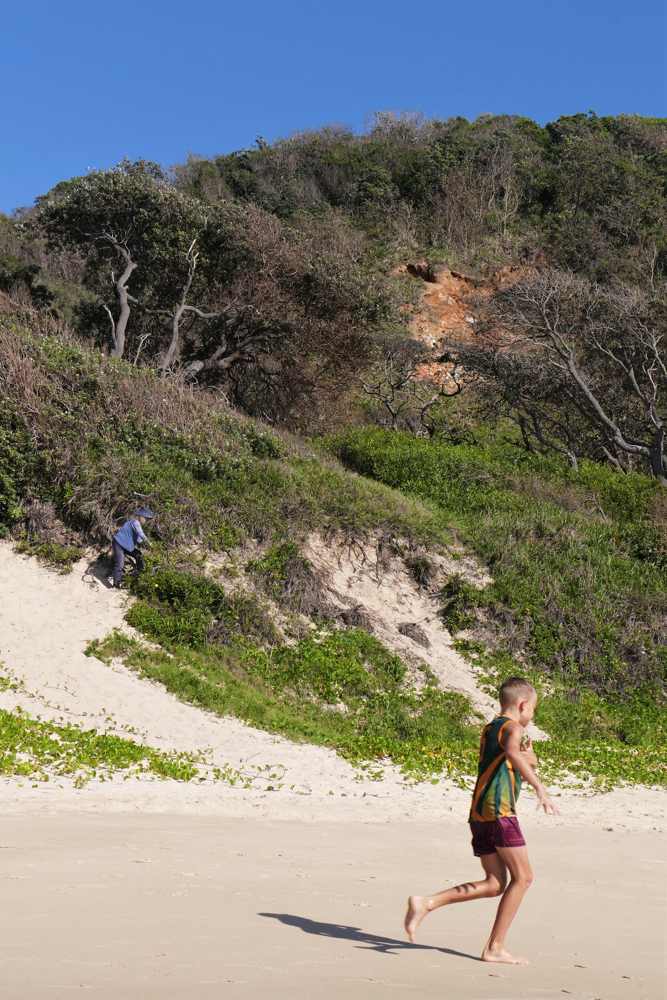 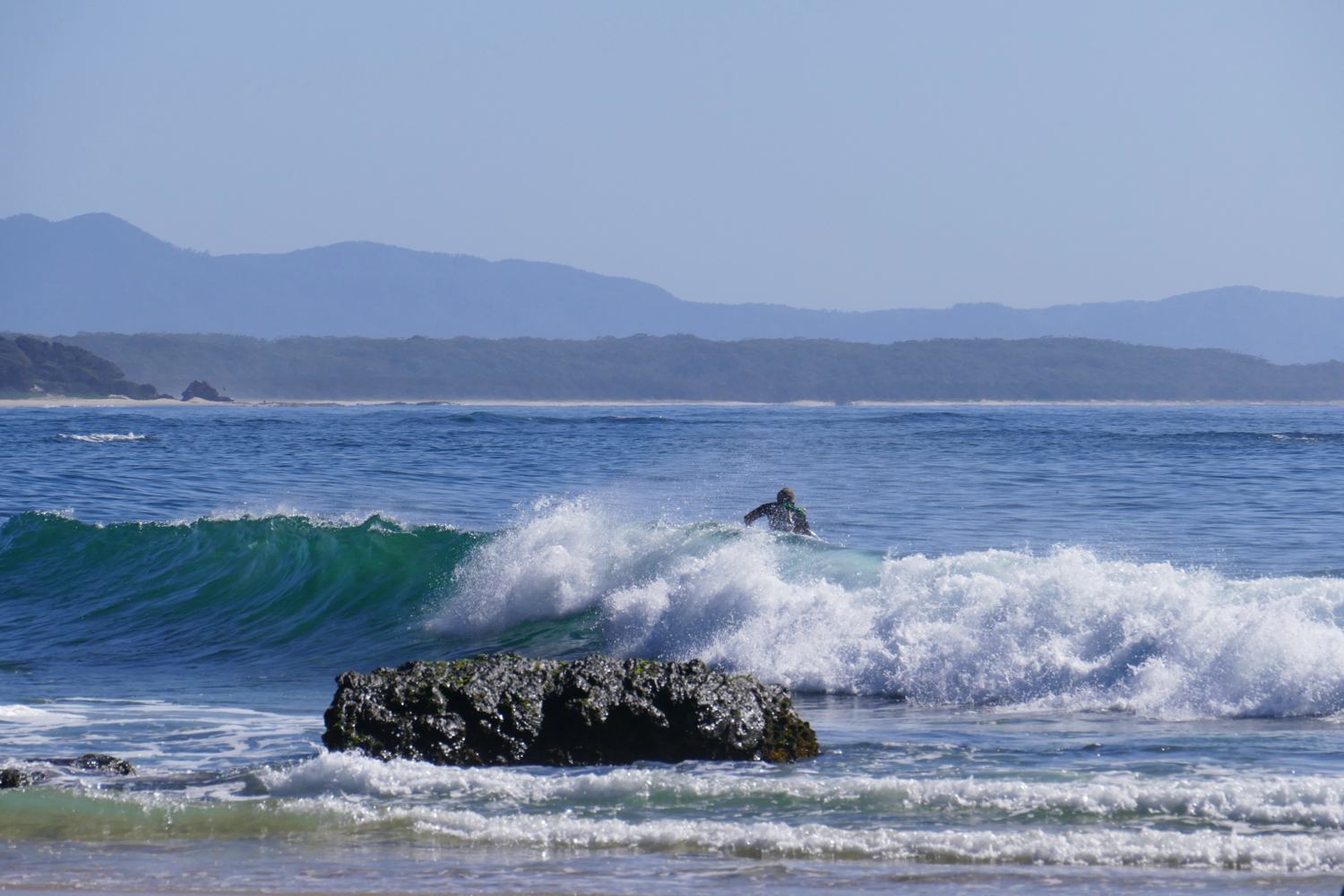 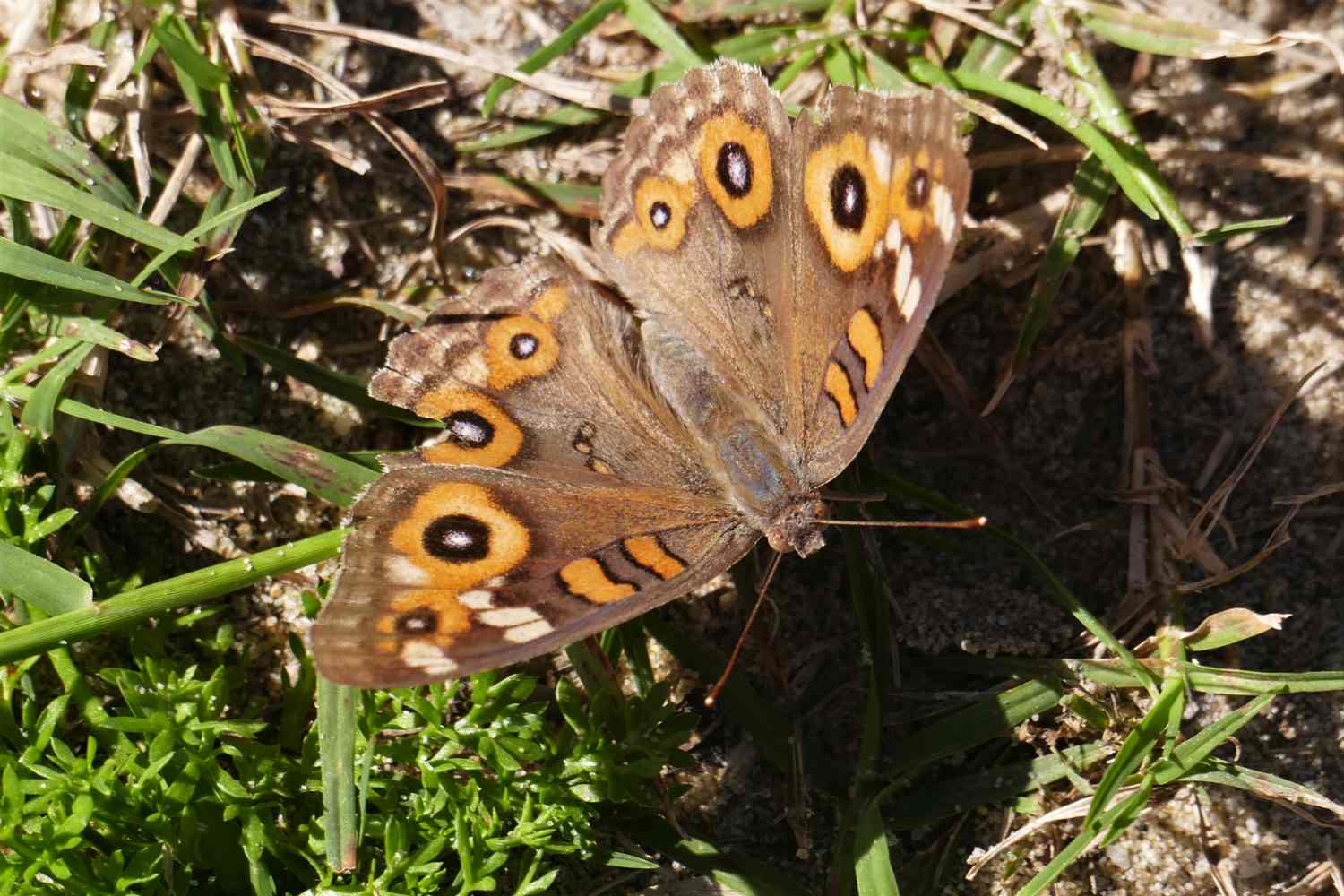 A Meadow Angus explores the grass reaching as close to the beach as sand allows.

I sit and watch the forest flow with Messiaen’s ‘Vingt Regard sur l’enfant-Jésus’ a favourite. A meditation and exploration with Indian drones (crickets) and intermittent arias by Magpies and Pied Butcherbirds (both superb musicians). 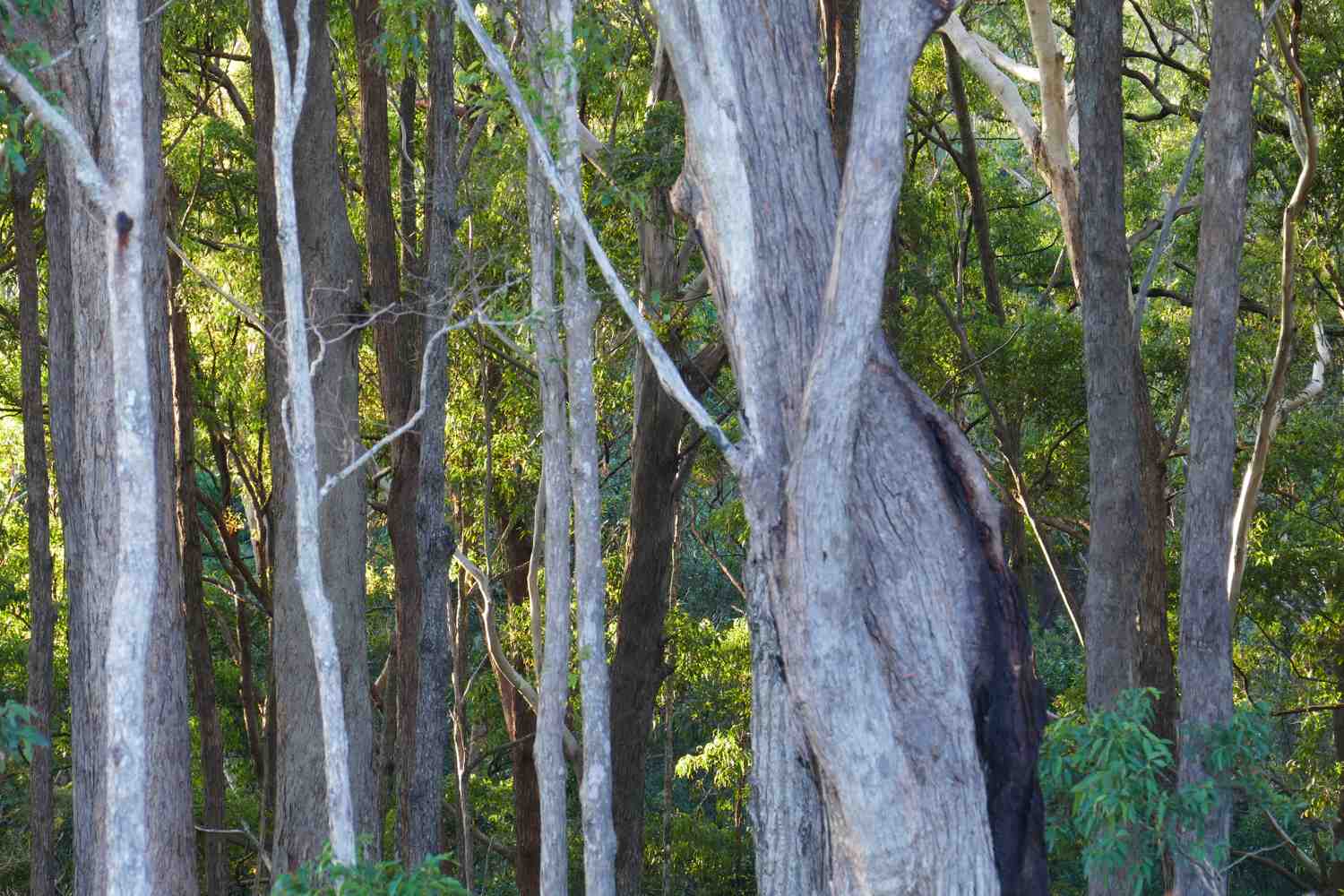 Three images from a timelapse sequence of collapsing light in Jagun

Light is contracting and deconstructing the forest. I find the tripod and use time lapse to reveal angles of withdrawal and the blooming of shadows. I want to stretch a hammock up in the bright canopy rolling around as if at sea. The blue & white one we bought in the Yucatan thirty years ago, but have never found anywhere to tie it to. It might still work. 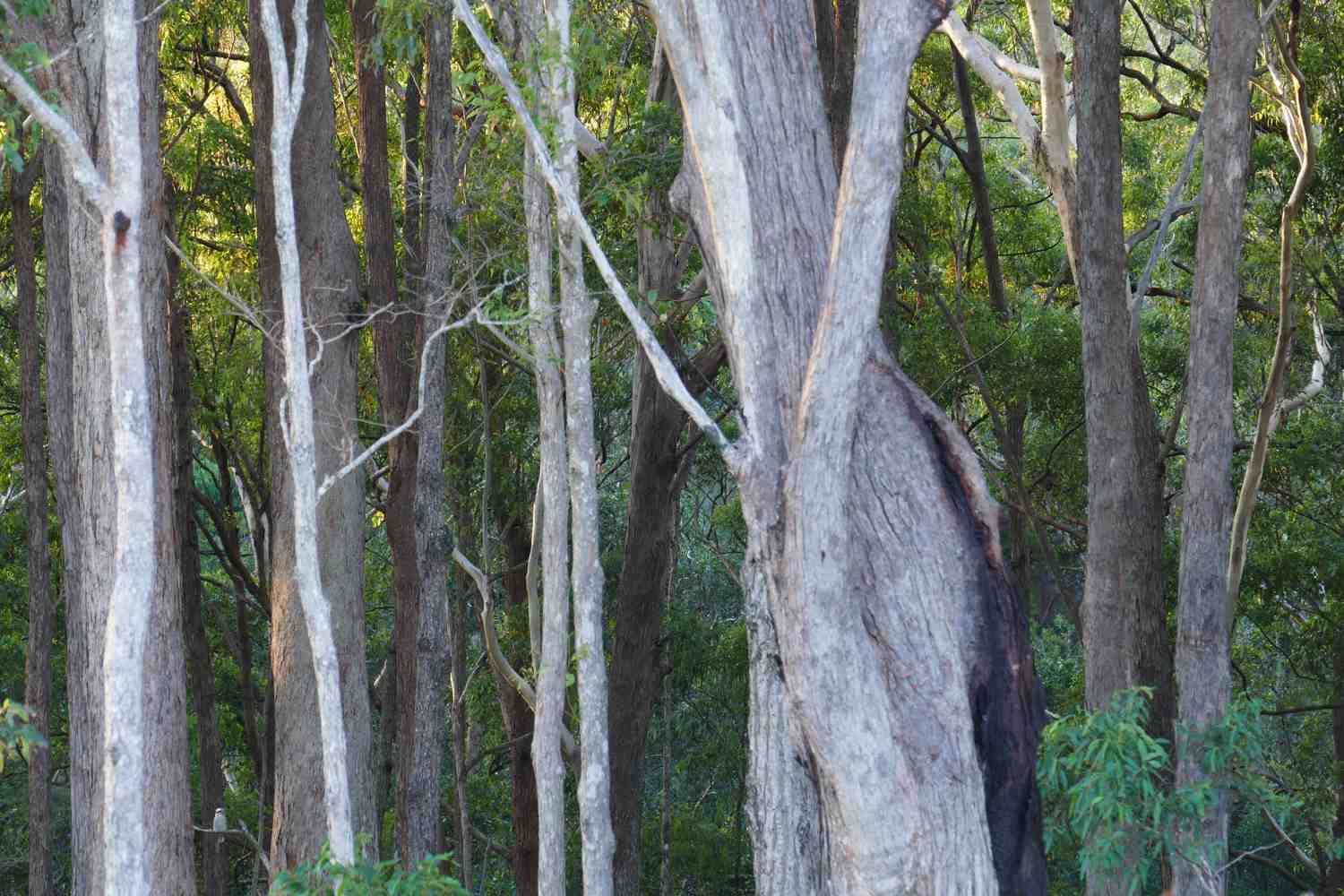 My whole body responds to Gavin Bryar’s ‘The Convertibility of Lute Strings’, the harpsichord weakens me, the music passes through my skin, a safety membrane of indifference except to touch. My internal organs are listening. A gecko starts coughing. 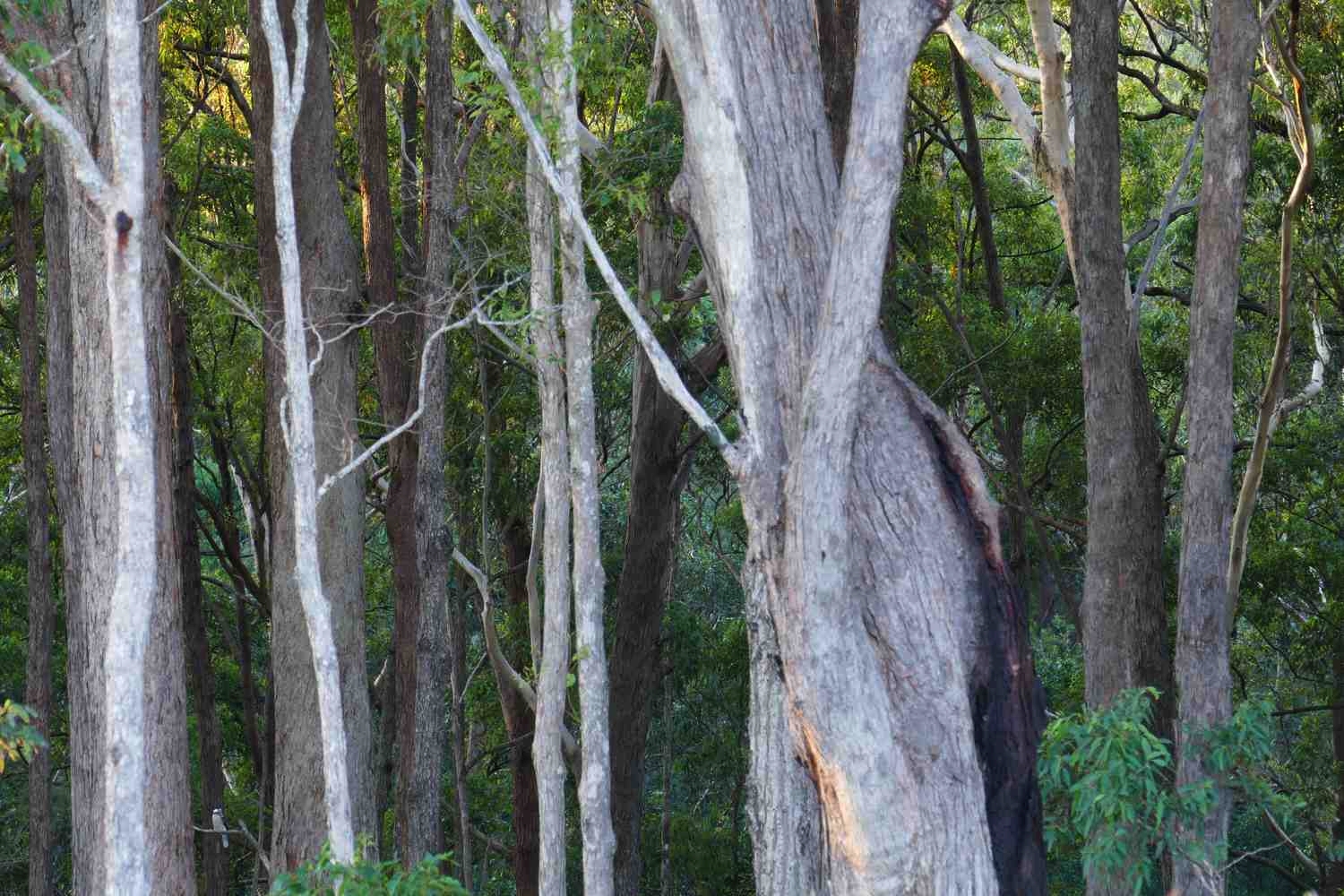 In these times, generosity must be forefront, to friends, strangers and the planet. I just read that John Berryman called Rilke ‘a jerk’, not a common term of abuse these days.

Rilke’s studied aestheticism: the social climbing and sponging that allied the poet to his aristocratic hostesses; the callous treatment of his daughter, whose trust fund, donated by Eva Cassirer, he shamelessly raided to pay his hotel bills; the betrayal of friends and adoring mistresses like Magda von Hattenberg (‘Benvenuta’) in the name of a self-abnegation that made ‘work’ his first priority; and especially (to my mind) a political disengagement so total that the outbreak of the Great War in 1914 seemed primarily a disruption of his own literary plans. Marjorie Perloff [2]