Pope urges world not to yield to fear. Guardian

Hearing the squeaking wheels of a pair of Grey Fantails, I dash out into the glimmer. These friendly birds, constantly zipping into the air acrobatically chasing insects and back down to a branch are common in the area, but very rare visitors to our garden. I am so excited . . .  from Gazantiep over the border past a straggle of duty-free stalls into mountainous Lebanon.

Bedridden with high fever, I was looked after for nearly a week by a generous family. Continuing on was too dangerous, nearly all the cars coming from the south were bullet holed from the civil war, so hitchhiked back out and into Syria. The Syrians were good to me. From Aleppo into the desert to explore Palmyra then down to Damascus – refused a visa for Iraq (yet again) so hitchhiked and back up and across into Iran, and from there to Afghanistan, Pakistan and India. I have given money to Médecins Sans Frontières, but not enough. People whinging about the lockdown have no idea. Wars are still going on, despite COROVID-19 ceasefires around the world. I KNOW I am so lucky, though my Ross River virus is very healthy (I get very tired). God knows how the developing world will cope with this pandemic.

Meanwhile, I suggest (from a privileged position, admittedly) that this lockdown is an opportunity for aesthetic exploration (for those not grieving, dying, or too anxious to clearly think, see, or feel). Early morning the forest is full of birds and full of photographs and full of sculptures. 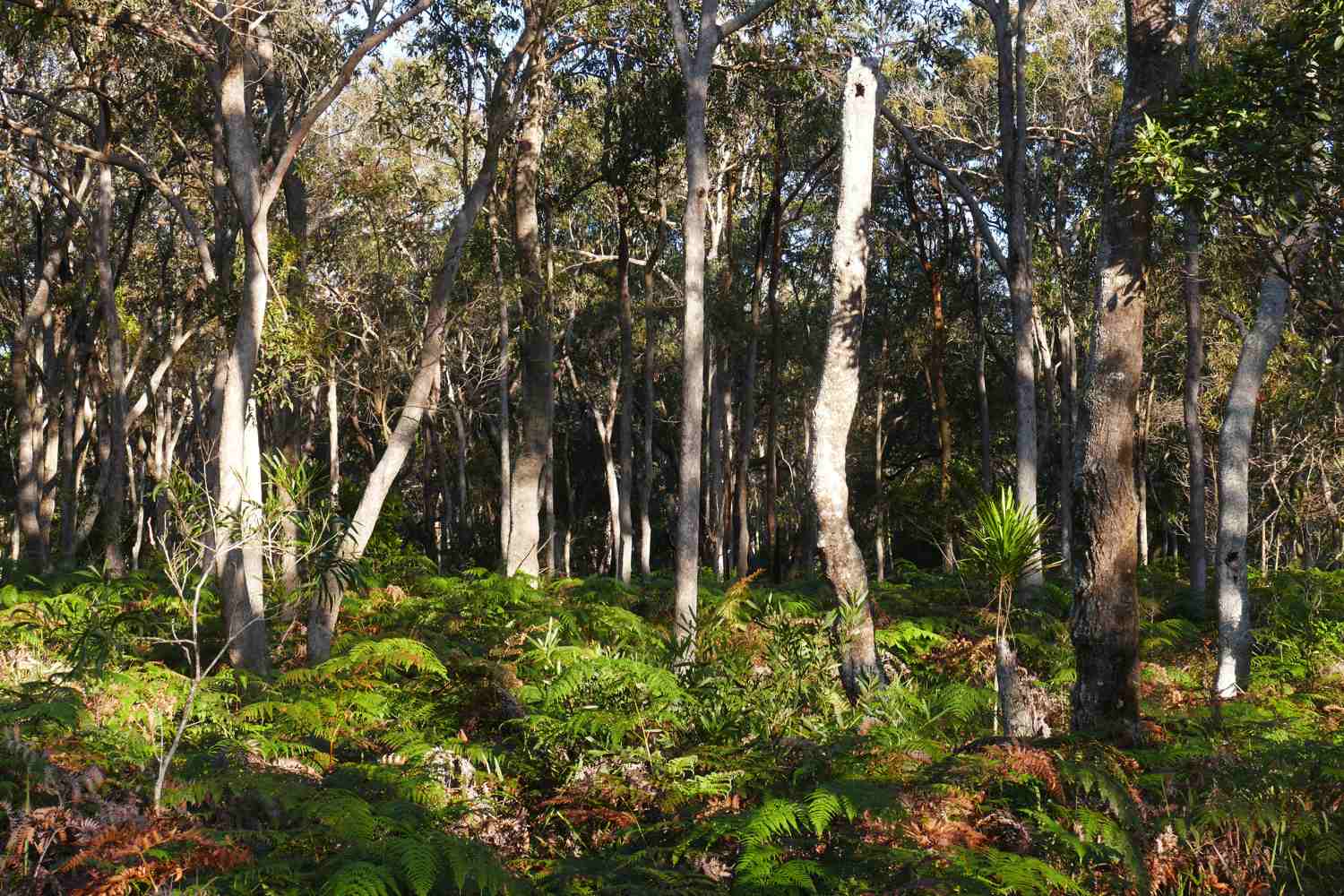 Jagun Nature Reserve. The dominant trees in this reserve are wrinkled Pink Bloodwoods and majestic Blackbutts.

This transformation of the raw material into a particular type of cultural object endows it with symbolic meaning and locates it in the art world, where a network of practices and institutions exists to make and interpret the work and make it available to a wider public. The meaning of sculpture thus derives from its being altered by an art practice with a history and context of interpretation, within which individuals may engage the work for purposes of enjoyment and understanding as well as for its utility. This is what distinguishes sculpture from non-art. Curtis Carter[1]

There’s truth in Carter’s comments (Arthur Danto’s Artworld, Pierre Bourdieu’s cultural capital, etc.),  but it fails to explain natural objects I love, and which I designate as sculptures. They are beautiful and they have meanings, (Danto defines art as works that embody meanings). These sculptures have layers of ecological significance and are worthy of aesthetic engagement. Could I call them natural artworks, as having particular aesthetic significance within this 100 hectare reserve. 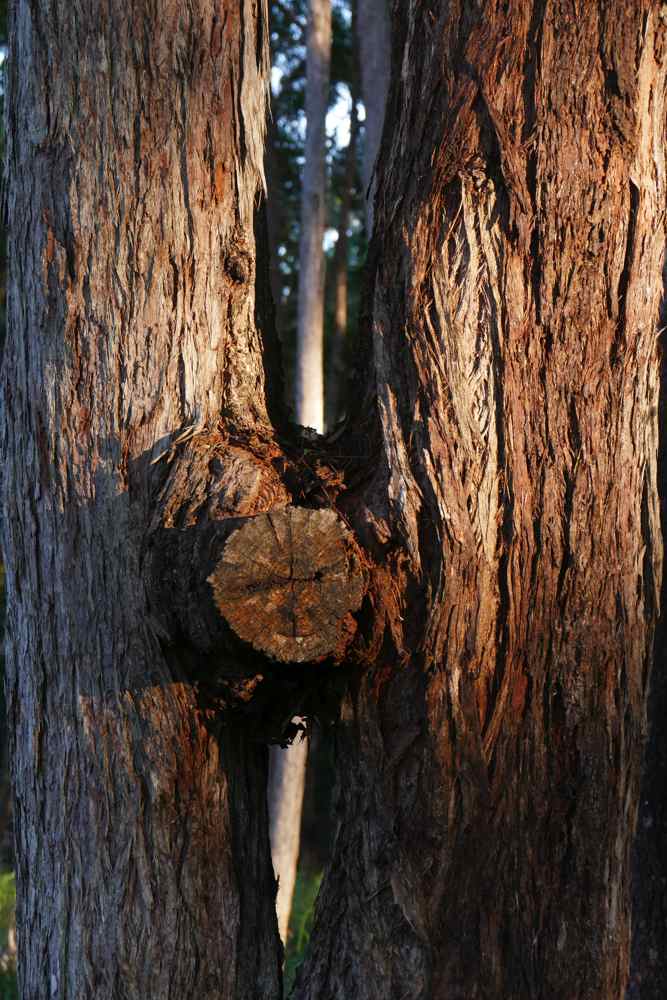 Sculpture at entrance to Jagun

I used this sculpture on the cover of one of my books. It has a clamped sense of sacrifice, a crucifixion even. It is a work that presages silence, apt for today of all days. Except, the birds can’t stop running their songs together.

In a piece called ‘one art’ (2006), the British artist Anya Gallaccio chopped up a huge tree (that had been accidentally killed)  then reconstructed it, resurrecting it to standing using bolts and aircraft cable. This work highlights not only the formal, structural properties of a tree, but also the creativity, labour and persistence of the artist. The dead tree becomes an artefact and a sculpture in anyone’s book. 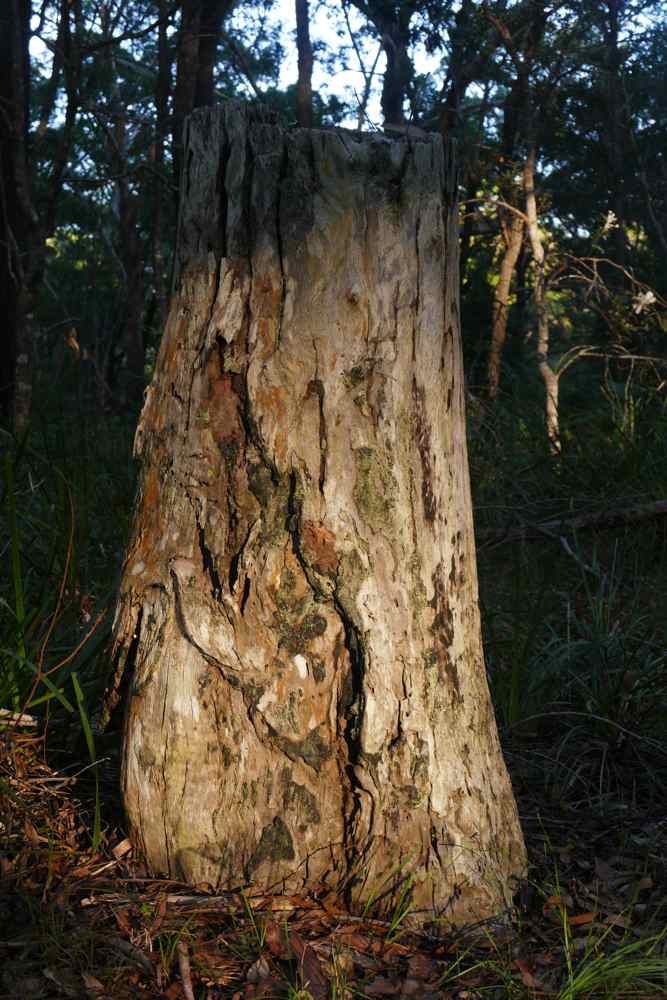 I photograph this stump frequently, I find it improbably beautiful. Its textures are alluring compared to metal. (Minimalist sculptors like Donald Judd used materials more often associated the construction industry than bronze or marble.) This object offers haptic experiences, in contrast to cold metal , or ‘Do Not Touch’. Stumps offer so much potential for investigation, imagining the species, age, size of the tree, the birds and animals that depended on the tree, the life it now has as a new world for beetles and woodlice, slugs and snails, millipedes and earthworms, fungi and slime moulds, lizards and frogs. The disintegration makes organic matter available for new organisms to use. 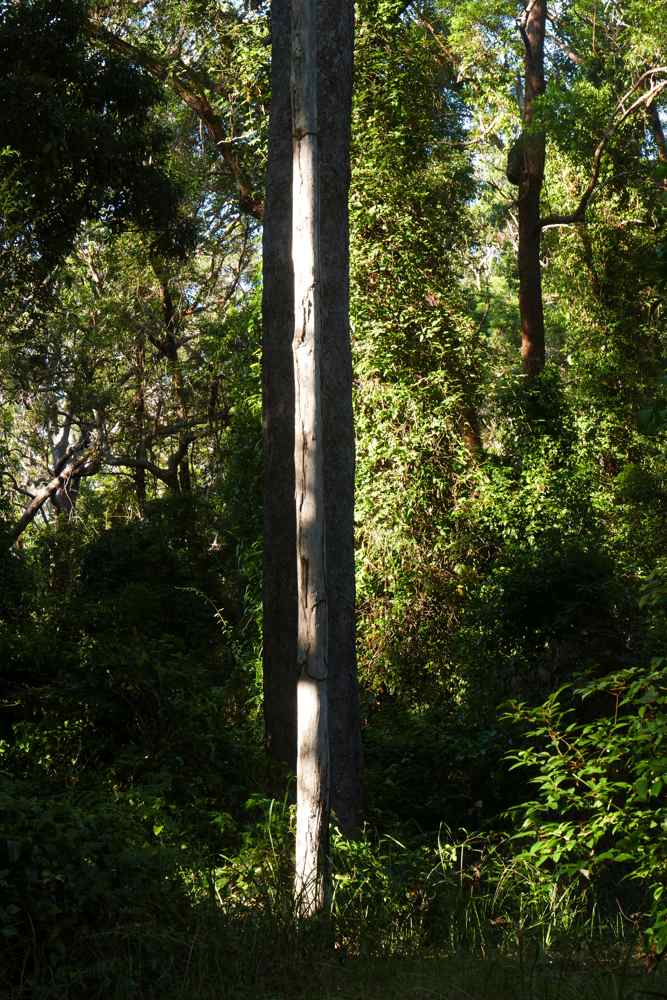 The curiosity of discovering a new tree, and hence a new story, every time, and the stimulus in this sense that comes to me from the imaginative quality of every door, table, window, or board – all of which contain the image of a tree – explain the motivation and urgency of my recourse to this kind of operation, which is not repetition, but a new adventure every time. Giuseppe Penone [2]

Arte povera (literally ‘poor art’) used all kinds of natural, everyday materials, such as stone and wood, and found materials as a rejection of the commercialisation of art. Natural aesthetics takes that rejection another step and highlights the need for sustainability in all areas of human activity. 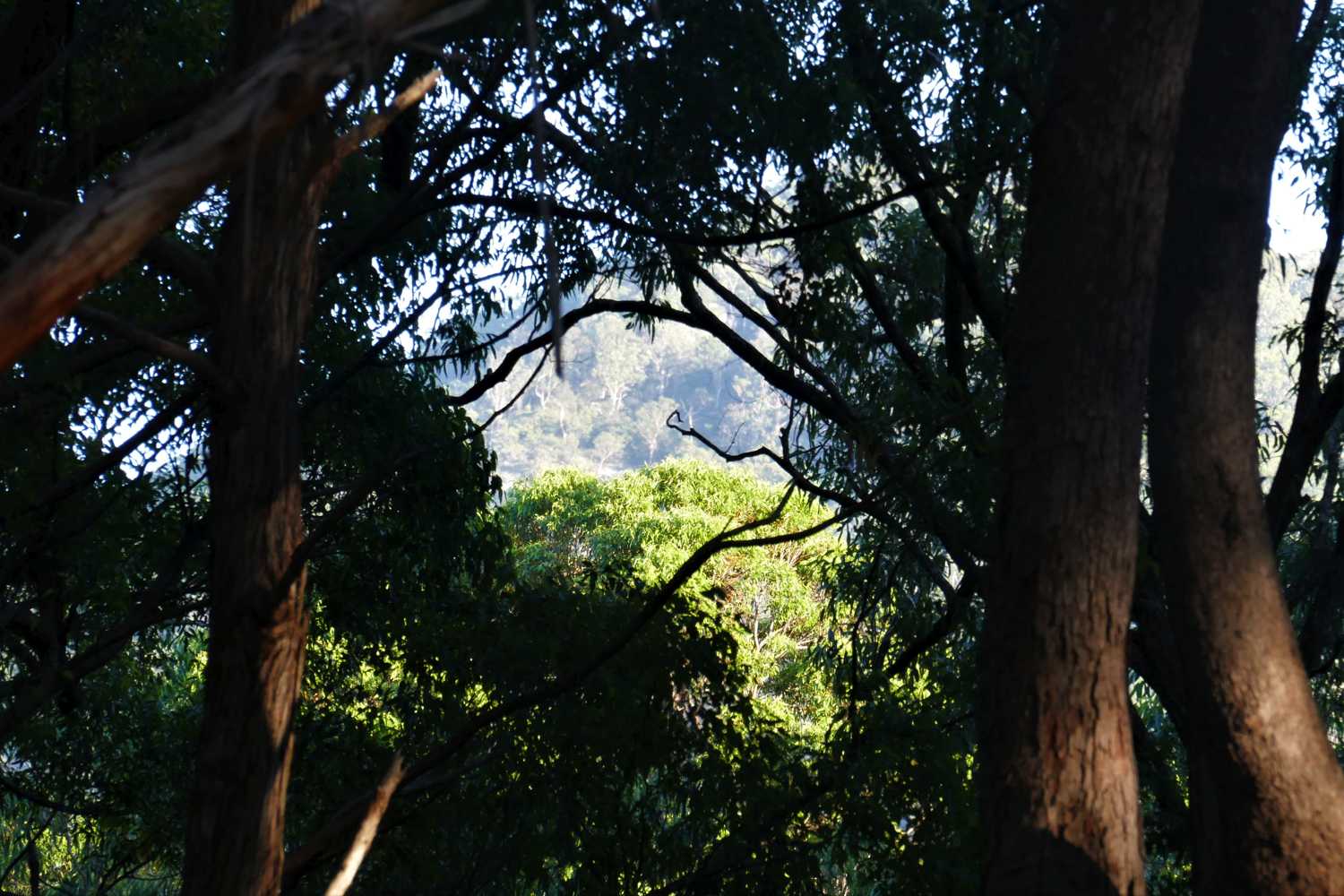 Though the canopy a glimpse of the summit of a Gumbaynggirr sacred mountain, Nunguu Mirral, a male Kangaroo increase site.

Many recent attitudes to materials in art are based in an emerging awareness of the interdependence of all substances within the ecosystem of the earth. The artist is liable to see himself not as a creator of new material forms but rather as a co-ordinator of existing forms. Victor Burgin [3] 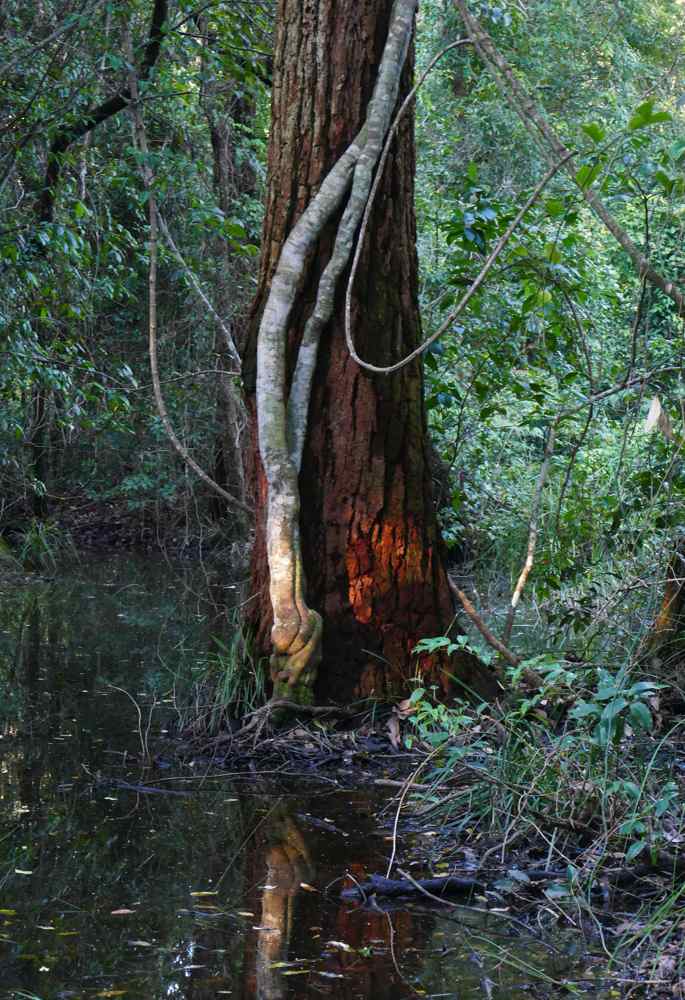 Our way of life for 99% of human existence, that of the hunter–gatherer, has just about finished, and in the last few years, the world population has become more urban than rural. Our agrarian revolution has evolved quickly into industrial production, factory farming and technologies that change how we think, feel and behave every moment. These revolutionary changes affect not only us, distancing us from natural processes and environments, but all other life forms that share this planet The result is ongoing destruction of natural processes and systems through global warming, loss of biodiversity and habitat, and the poisoning of the land, waterways and the seas. I believe an appreciation of natural aesthetics is a positive step towards restoring our lost connections, necessary for the health of the planet, our society and ourselves.

As an alternative to Curtis Carter (quoted above), here is is Rosalind Krauss: We had thought to use a universal category to authenticate a group of particulars, but the category has now been forced to cover such a heterogeneity that it is, itself, in danger of collapsing. And so we stare at the pit in the earth and think we both do and don’t know what sculpture is. Yet I would submit that we know very well what sculpture is . . . But the convention is not immutable and there came a time when the logic began to fail.[4] 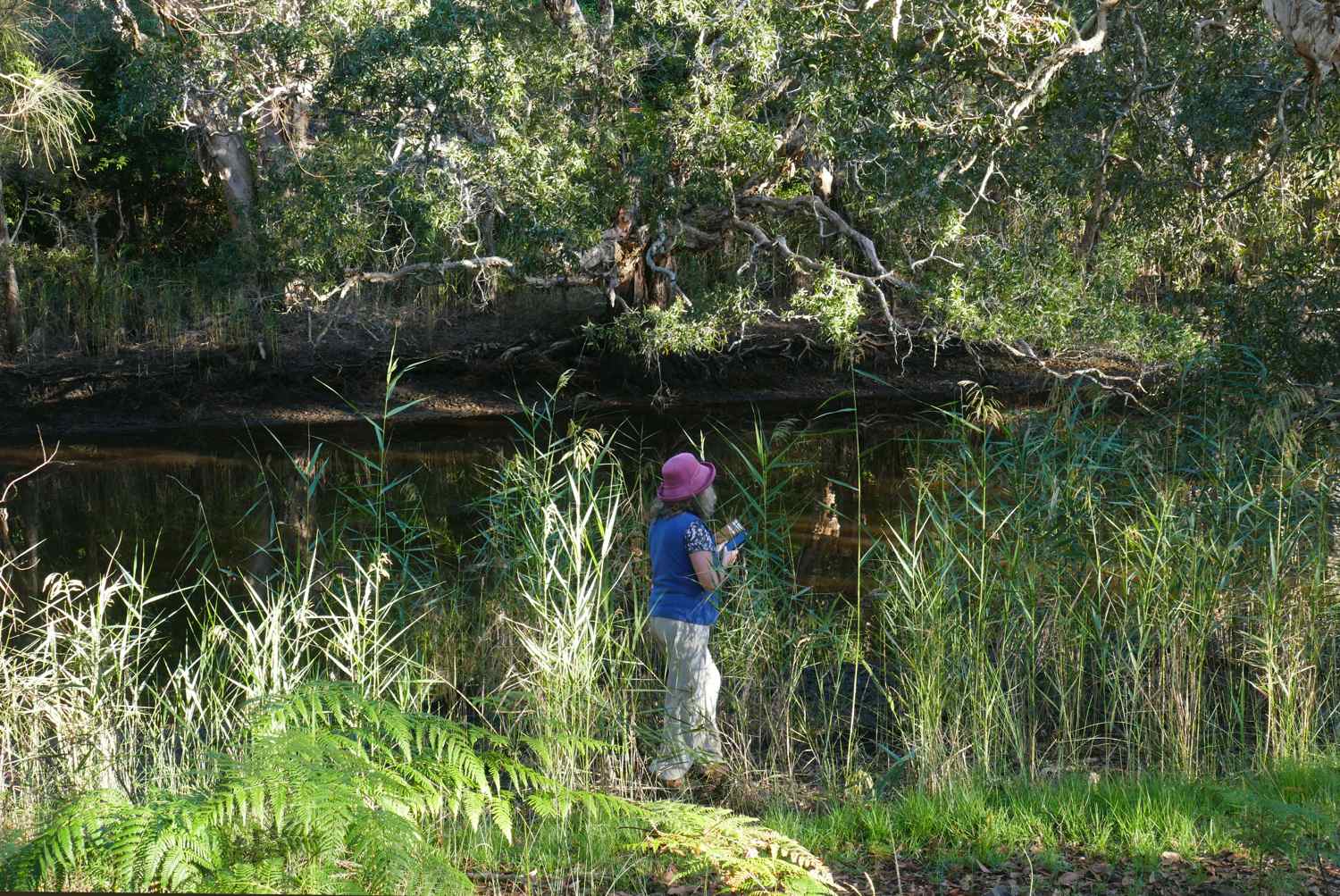 I am lucky to be love well past 30 years (and for birding, Wyn is a better spotter than me, and a lot more patient) 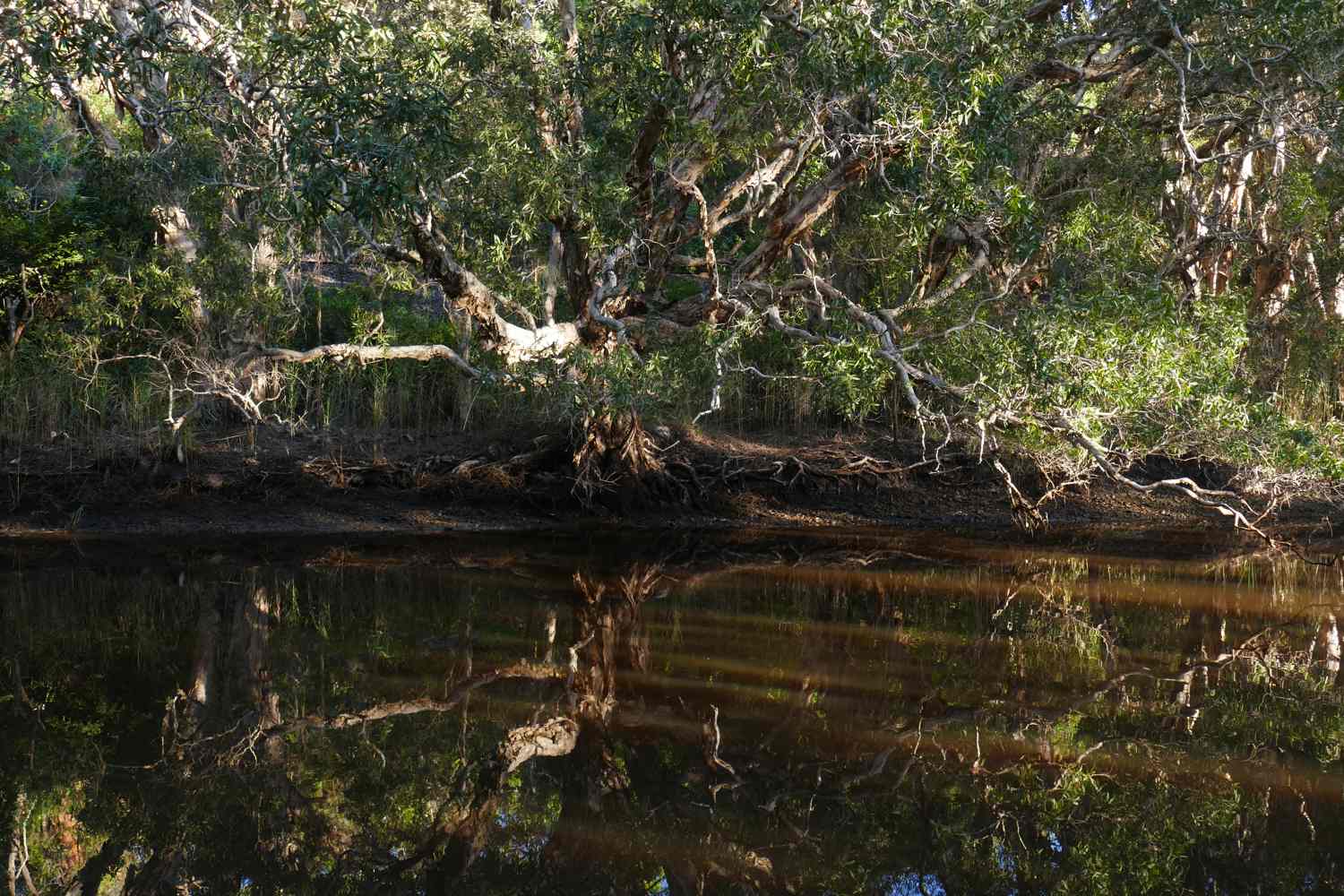 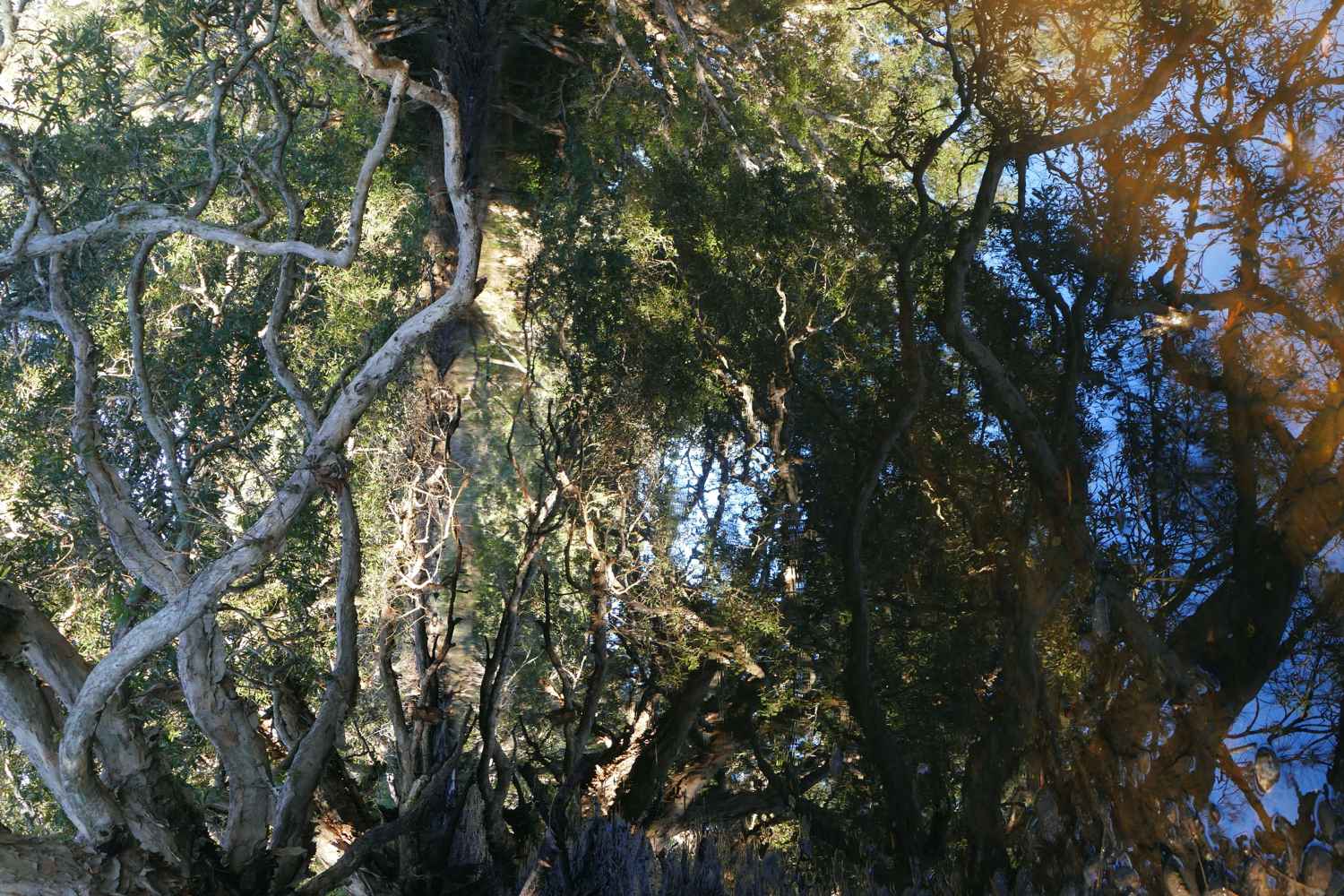 The flow must have broken the sandbar, emptying the lagoon –
an Azure Kingfisher, colours so fast its vanishing is exciting,
verges on a sighing with a glimpse of a head, turtle ripples
fragment the trees and skies, a kind of displacement
or hallucination mixing new colour combinations. 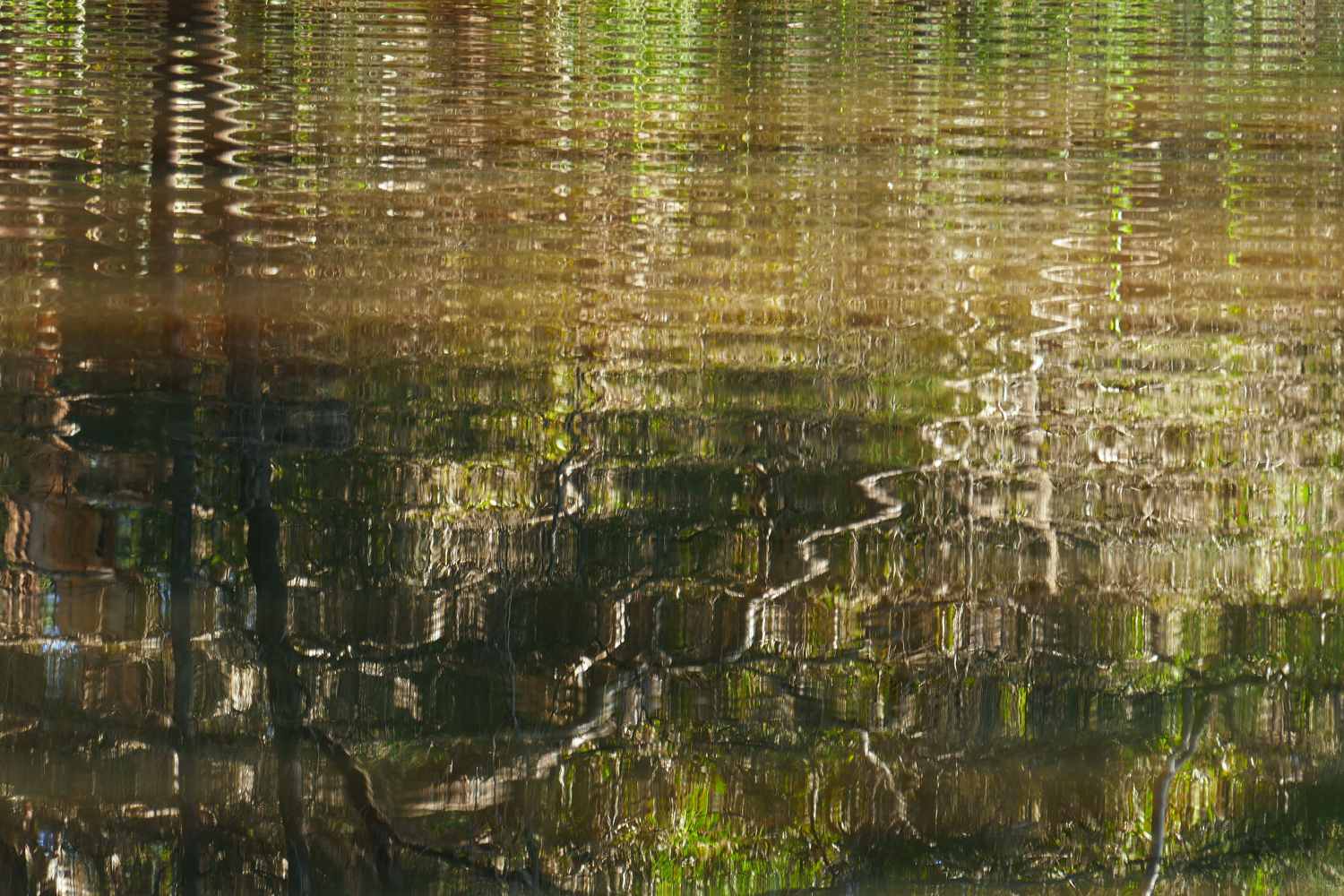 Ripples made by a turtle

Highlights: A Rose Robin (very rare here); two pairs of Logrunners, either side of the track; a Rufous Whistler pouring notes onto us from right overhead; a shy Swamp Wallaby thumping the ground. 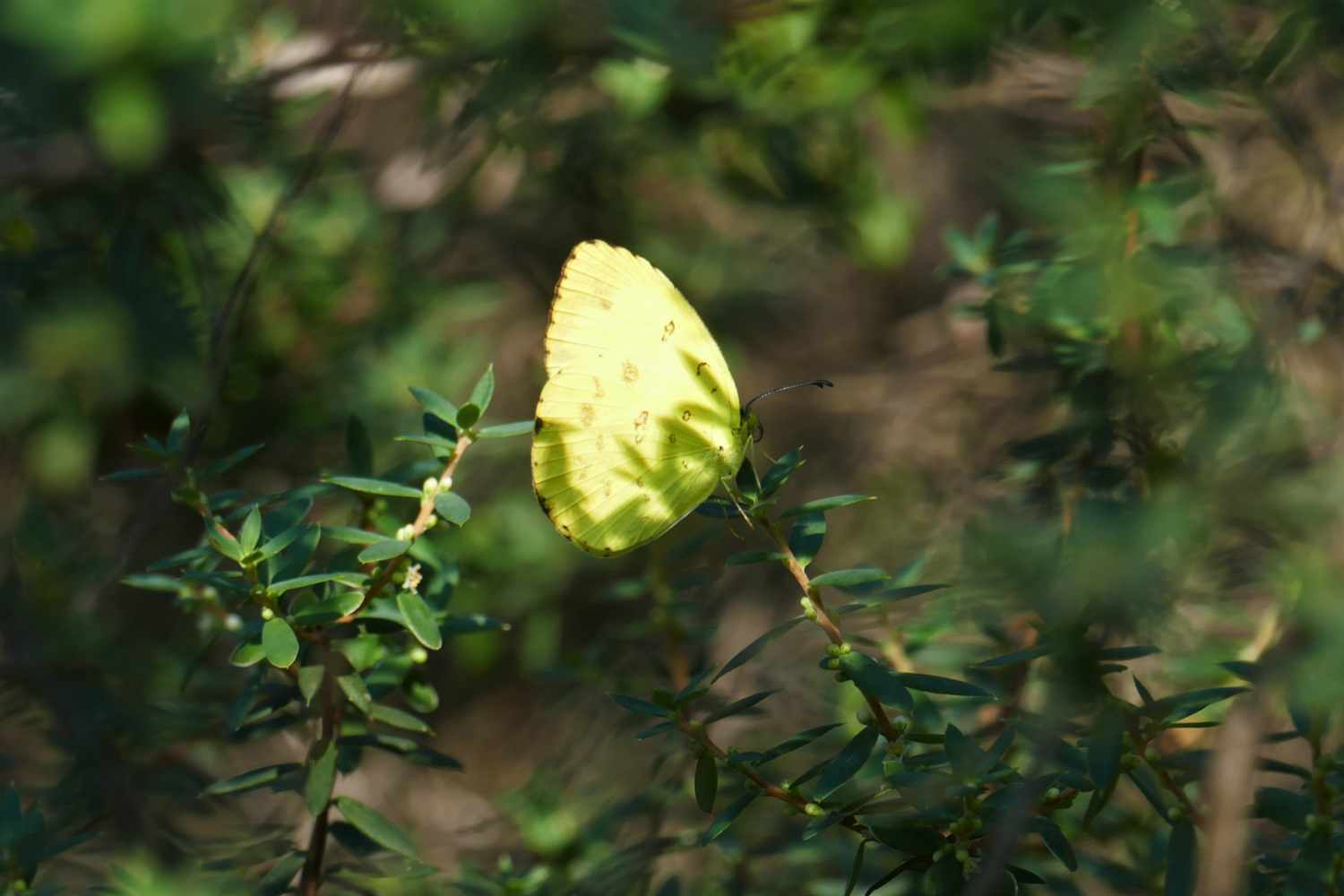 It’s been a great year for viruses and butterflies, this Lemon Migrant butterfly is more common
in our garden than here in the adjoining forest.

These hours may seem filled with absences just waiting
to be refilled, but can we think of these days as opportunity
not theft, for those lucky enough to be in good health
and have enough food, a park or garden, or the bush close by.
The denouement will be long time coming. 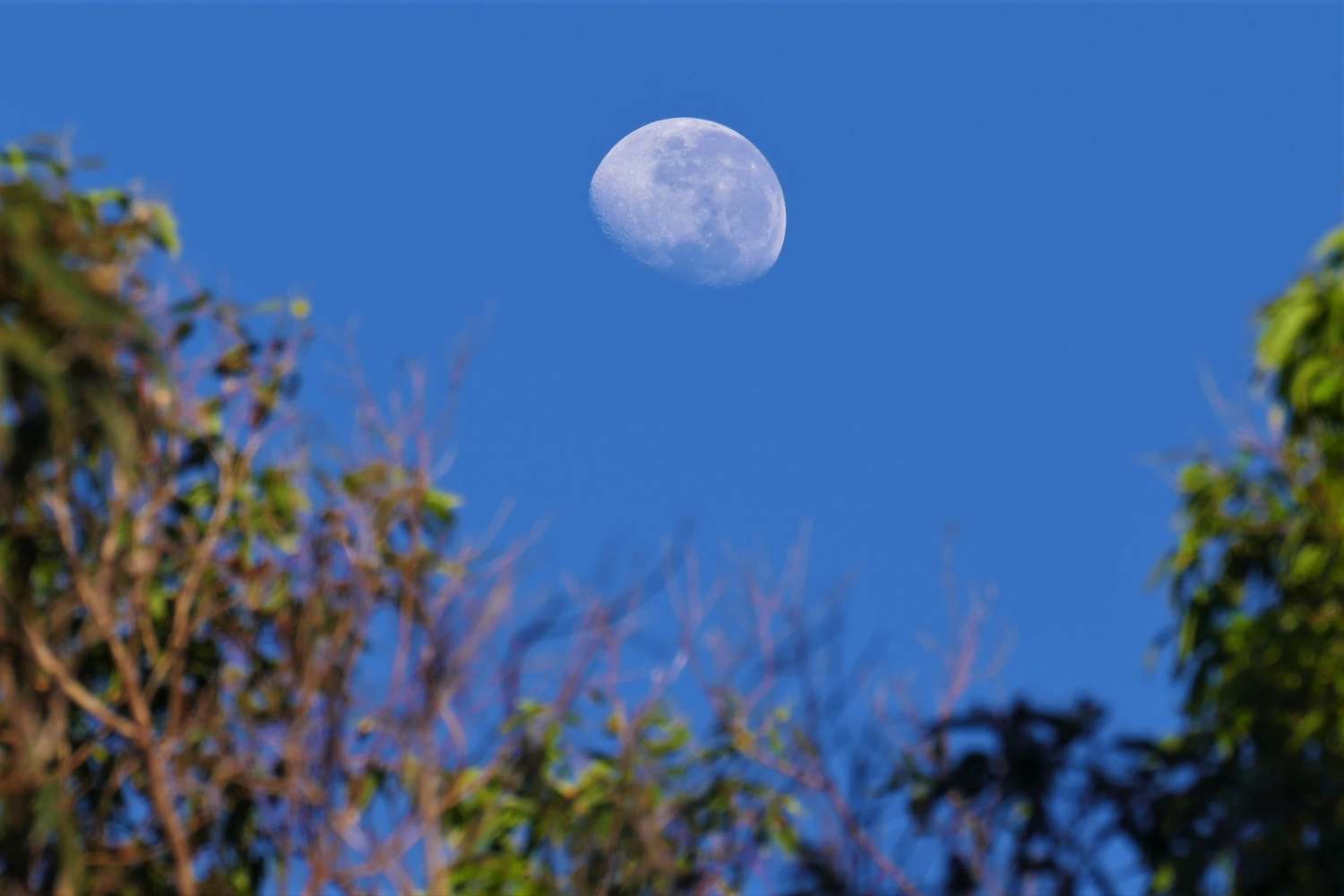 The clarity of a scalped Easter moon. The dark areas are young crater impacted plains called maria and are composed of basalt created by a huge impact with an asteroid or comet. The light areas are the highlands uplifted as a result of impacts.

A favourite Resurrection
Spencer Stanley would have been happy with lockdown in his village of Cookham. For him Cookham was Eden,  every detail ripe with mystical significance: ‘I became aware that everything was full of special meaning and this made everything holy.’ His masterpiece is The Resurrection, Cookham, 1924-7, filled with villagers emerging from the graves. There are three versions of Hilda his wife, and a self portrait.

[4] Rosalind Krauss ‘Sculpture in the Expanding Field’ in October, Vol. 8, Spring 1978, p33. Krauss wrote this essay to try and explain the origins of  Postmodern art.